The Gloucester Invitational 24 Hour Track Race 2019
On 10.00am on Saturday 2nd May 1982 a remarkable 24 hour track race destined to change the history of long distance running was started on the Blackbridge Athletics Track in Podsmead, Gloucester. Organised by Chris O’Carroll on behalf of the local Gloucester Athletic Club, he was rewarded with a number of record performances including a stunning new World Record for 24 hours of 170 miles 974 yards (274.480 kms) set by club member Dave Dowdle.
The field that day consisted of 19 international entrants including two women, with fancied runners from France (and the existing World Record holder), Australia, and the USA joining British favourites Mark Pickard, the then reigning British 24 Hour record holder and a very strong local contingent of Dowdle, O’Carroll himself and Martin Daykin. All sixteen runners still on the track after 24 hours covered over 100 miles, with Pickard 2nd at over157 miles and O’Carroll 3rd at over 140 miles.
Two women also beat the previous world best distance with British woman Lyn Fitzgerald finishing in 5th place to establish a new Women’s World Record of 133 miles 939 yards (214.902 kms) – another outstanding achievement in the days when women running long distance was still not accepted by many and indeed they were laughed at by some of the men as they lined up at the start; but they were soon to be laughing out of the other side of their faces!
Roll forward 31 years to 2013 and the track being refurbished and reopened by Princess Anne as the Blackbridge Jubilee Track inspired Pam Storey, a long-time Gloucester Athletic Club member and a well-known devotee of long distance racing as a much respected organiser of events such as the 2013 British Ultra Fest at Radley in Oxford and the Crawley 6 Hours and 12 Hours ultra marathons, to propose holding a tribute 24 hour race on the track to celebrate Dave Dowdle’s world best achievement – and which still is the British 24 hour record.
The Gloucester 24 Hour Track Race was born. Billed by Pam (who of course took on the Race Director role, but ably supported by Co-Director Abichal Sherrington) as an opportunity for novices and experienced runners alike to become a part of local running history by competing in an event that has not been held for many years, the weekend of Saturday and Sunday 14th and 15th June 2014 was agreed as the date.
The search was soon on for sponsors to help meet the costs of promotion over and above expected entry fees from a field limit of 50 runners. Gloucester AC agreed to be the hosting club again and a brand new race logo was designed by fellow long distanced runner Mark Howlett.
Introduction by Phillip Howells from the July 2014 race report.
------------------------------------------------------------------------------------------------------------------------

2019 Race report By Paul Corderoy November 2019
Having run his first track race at the 2014 event and now living in Gloucester, Paul Corderoy felt it was time to put the race back on the calendar permanently.  So in 2018 Paul set up a 6 hour event at Grimley with his wife, Maria to put their organising skills to a test.  The event went well and a new events company Severn Valley Events, was born.  The Gloucester 24h 2014 race had been a hot race, being held in the summer months so a decision was made to move the race to a cooler time of year.
The Gloucester invitational 24 Hour Track Race was held under UK Athletics Rules and obtained the Bronze Label of the IAU (International Association of Ultrarunners) so that any records set or international selection qualification distances recorded by competitors would be officially recognised. A field of over 60 long distance runners from 14 nationalities eventually entered. With a starting field of 58. 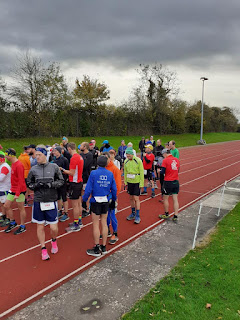 Amongst the starters was a Norwegian, Simen Holvik who was looking for a qualifier into his national team.  Also travelling from Spain was Eduardo L. Gomez Velasco who had narrowly missed out on the team selection for the world championships the week before. Several other entrants were hoping to set records of their own and were looking qualifying times for other races. With the Spartathlon auto qualifier being raised this year.

In recognition of the historical background to the race, the organisers were delighted that the British record holder Dave Dowdle agreed to start the race on the Saturday and provided an annual trophy in his honour, which would go to the top British finisher male or female.


A storm was forecast on the day with some high winds. The race started in a cloudy overcast sky with perfect temperatures for running.  Through the afternoon there were showers and drizzle. Overnight the temperature maintained 9 degrees with a steady drizzle of rain throughout.  Sunday morning the rain subsided as the race played out the finale.  Through the night we had lost Gomez Velasco to the cold.  He crossed 100 km in first place in 8:25:51, but then started to drop down the field as he suffered from the English weather, being used to the Valencia heat .  He crossed 100 miles in 17:36:24 to collect a buckle and call it a day.

Dowdle’s British record was never in any danger.  The leading British runner, Danny Hawkins, coached by British 24 hour team runner, Wendy Shaw who was the youngest participant at 24 years old, crossed 100 km in 3rd place rising to second by the time he hit the 100 miles in a time of 15:41:40, a Spartathlon auto qualifier. Behind Hawkins as the second place Brit was our oldest male participant Ian Thomas. Thomas covered 100 miles in 18:31:36.  Hawkins finished the 24 hours with a distance of 210.380 winning the Dave Dowdle cup

After the 100km mark Holvik, coached by  Sondre Amdahl,  took the lead from Gomez Velasco and was never in any danger.  He ran a solid paced race and passed through 100 miles in the lead and with a new Norwegian national record of 14:06:28 beating the previous record by 17 minutes set in 2017. He continued his relentless pace, showing a class all of his own. With 5 hours to go it looked like he may break the Norwegian national 24 hour record.  He eventually finished the 24 hours with 253.140 km only 4.5 km from the Norwegian record which is at 257,606 km 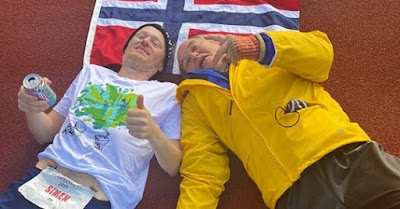 Holvik and his crew father

The ladies’ race produced a great race between Rachel Ball and Rebecca Mabelle running closely all day.  They passed through the 100km split with Ball, coached by Liz Yelling, 18 minutes in front.  As midnight passed and the early hour set in Mabelle pulled in front and by sunrise was over an hour in front.  Crossing 100 miles in 21:11:57. Ball maintained second place and crossed the 100 mile mark in 22:43:44 although by this point Stefania-Gabriela Iaciu from Romania was starting to close the gap just ½ an hour behind.   At 24 hours Iaciu was only 2 km behind Ball. Mabelle won the race on her first ever attempt at a track 24 with a distance of 172.390km and coming 9th over all with Ball in 12th and Iaciu in 13th.

At the other end of the field there were some gutsy performances.  Some of the athletes struggled with injuries and stomach issues.  All regular problems for the endurance runner, however many stayed on the track and battled it out for the 24 hours.  The determination to continue is always inspiring, especially when people miss their goals but don’t quit! With a determined march that is fast becoming her trademark, Roz Glover was the final person to cross the 100 mile mark at 23:52:45 she moved up from 28th place at 100km to 23rd to achieve the 100 miles in one day.  Along with Fiona Davies our oldest participant, 6 minutes in front. Moving from 27th to 22nd over the night and Sunday morning, also reaching 100 miles. 6 runners left it until the final hour to achieve 100 miles.

The prizes at the official presentation after the race were handed out by Dave Dowdle with 23 runners achieving 100 miles and the coveted 100 miles in one day buckle.  Three runners surpassed 200 km including the winner Holvik, the youngest runner Hawkins and the oldest male runner Thomas!

The organiser would like to thank referee Norman Wilson for his hard work. Dave Dowdle for starting the race and helping with the awards presentation.  Dave Cresswell for the PA and occasional music/commentary. Gill, Sam, Nat, and Helen who gave up their free time to feed and water the athletes. Arthur and Chris for help setting up and knocking down the event.

In 2020 we are going to hold a 48 hour race as well as the 24 hour race.  To express an interest please fill in the form found here: http://www.severnvalleyevents.co.uk/events/blackbridge.html