Cyclothon is an event organised by Victor Ubogu, a former England rugby union player, and his hospitality and sports travel business, VU Limited.  It comes in the form of a 12 hour race or 8 hour  race. The latter starting 4 hours after the first, so that it all ends at the same time. For either duration, you can ride in a relay team of 4 to 8 riders or, as I chose to do, solo.  For the 12  hour riders the start was 7:30 am.  The briefing over ran a little so the start was changed to 7:45 am, but because of failing light we still finished at 7:30 PM.  We lined up at the start on our  bikes and were counted down to the start.  I chose to sit at the front for the start and was instantly overtaken by a few very keen riders. 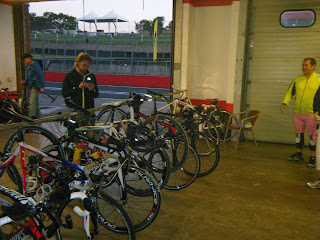 Brands Hatch is a rollercoaster ride.  constantly rising and falling across the natural landscape. I really underestimated how hilly it was until I had ridden my first lap.  This however is a plus for a 12  hour ride as you are constantly moving position from aero bars to standing, which stopped any potential saddle sores.

The course starts on Brabham straight going into Paddock Hill. A downhill right hand corner. You came out of the right hander and up a steep, very steep hill, Hailwoods hill.  Here they had a timing mat at the bottom and one at the top and there was a hill climbing prize for the fastest rider through these 2 or 300 metres. At the top there was a  180 degree right which turns downhill half way through (Druids) From Druids was a very fast downhill into Graham Hill corner. A 90 degree left corner.  Then it was a  slug along Cooper straight, which either was, or just felt it was, slightly uphill after the high speed into it. Then it's into Surtees a 90 degree left hand corner going uphill. At the top it flattened out then quickly fell down into Pilgrims drop and then straight up Hawthorn Hill.  At the top of the hill you turn into the right hand corner, Hawthorns. Then another short  straight that felt like it was rising gradually to Westfield corner. From there a drop down into Dingle Dell and then a rise again at Sheene curve to Stirlings. From there a drop down to Clearways, a fast corner through Clarkes Curve and back to the start. Passing the pits was fast, and must of looked impressive.  It was quite easy to hit 25 to 30 miles an hour here. 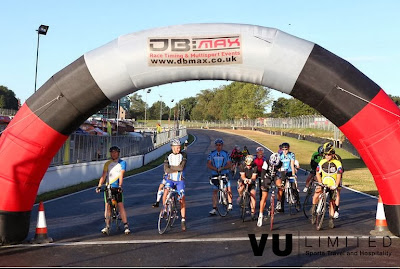 Just before 11:30 the pit lane was closed and the 8 hour riders started. Their start was Le Mans-style, with cyclists making a mad dash across the tarmac to their bikes propped up by the roadside.  It was good to have more riders on the track. 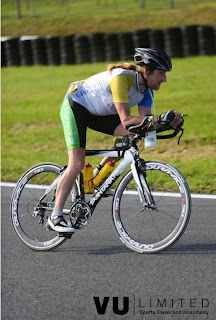 I hadn't put a lot of thought into a statergy.  The bike section of an Ironman race takes 5 to 6 hours. So I am used to riding for that long non stop, however the big difference here was there were  no aid stations.  So to get water or food meant going into the pit lane and running up to the canteen if you had no crew and were not organised like I wasn't.  At around 12 o'clock I could feel my  speed dropping and I had run out of bananas.  So I decide to pit. Each team shared a pit garage with another team and the soloist had garages 1 and 2 to share between them.  Which, luckly were closest to the canteen and toilets.  I racked my bike, removed my shoes as my feet were already going numb; Ran to the loo and had a pee; Ran upstairs and stuffed 4 bananas into my cycling shirt  pockets; And ate 3 cheese and tomato sandwiches.  Back in the garage I filled up my 3 water bottles, put my shoes back on and got back on the bike.  The stop took around 10 minutes.  My next decision was when to stop next.  I was thinking 9 hours would be good as that would only leave 3 and thus a shorter final stint.  However as the day warmed I needed to drink more and at 3:30 ran out of water, so had to pit again.  This time a 9 minute stop and I was off again.  I managed to stay out until we came around and were directed of the track to signal the end of the race. 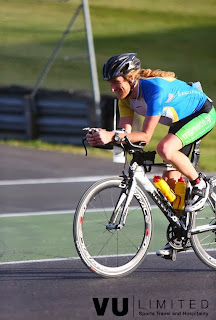 Going round and round a 2.3 mile circuit was much less boring than it sounded.  There were times when people would ride side by side and chat.  I got to know who the other 12 and 8 hour solo riders were and chatted and encouraged each other frequently as we passed.  The team riders also gave us plenty of encouragment and the whole event had a great buzz and atmosphere.

Never having done a 12 hour ride, my goal was to complete 200 miles as it was a nice round number.  My computer read 202 when I finised and I was pleasantly suprised to find out I had come 3rd. The winner managing 225 miles.