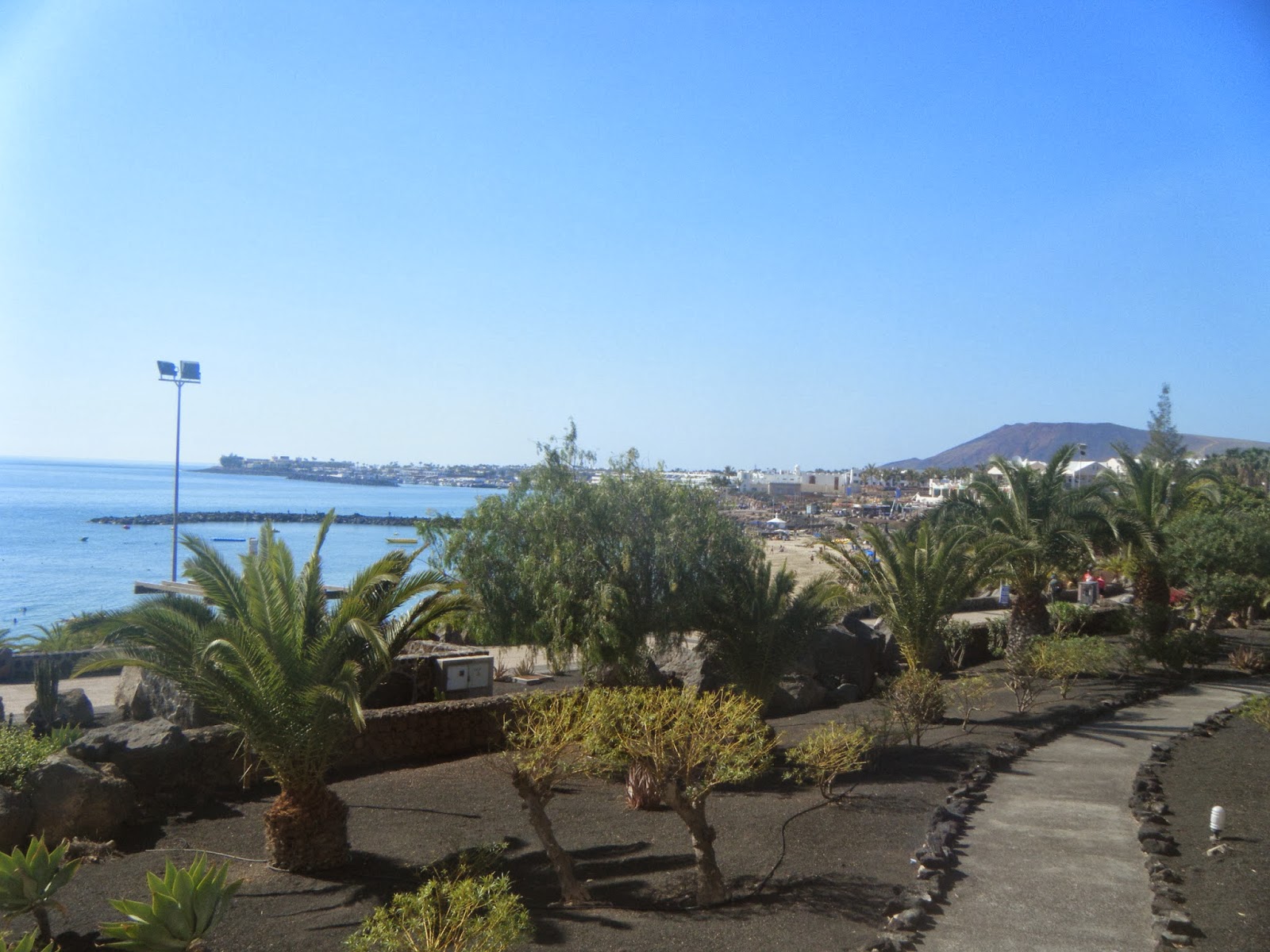 The plane landed with a little bump. In the air the anticipation of what lay ahead. Slowly the passengers disembarked.  Through passport control, baggage collection and out into the airport carpark. Two suitcases and two bike boxes wedged into the hire car. The sweat was running off my skin.  From 0 degrees to 20 in the four hours of a flight. 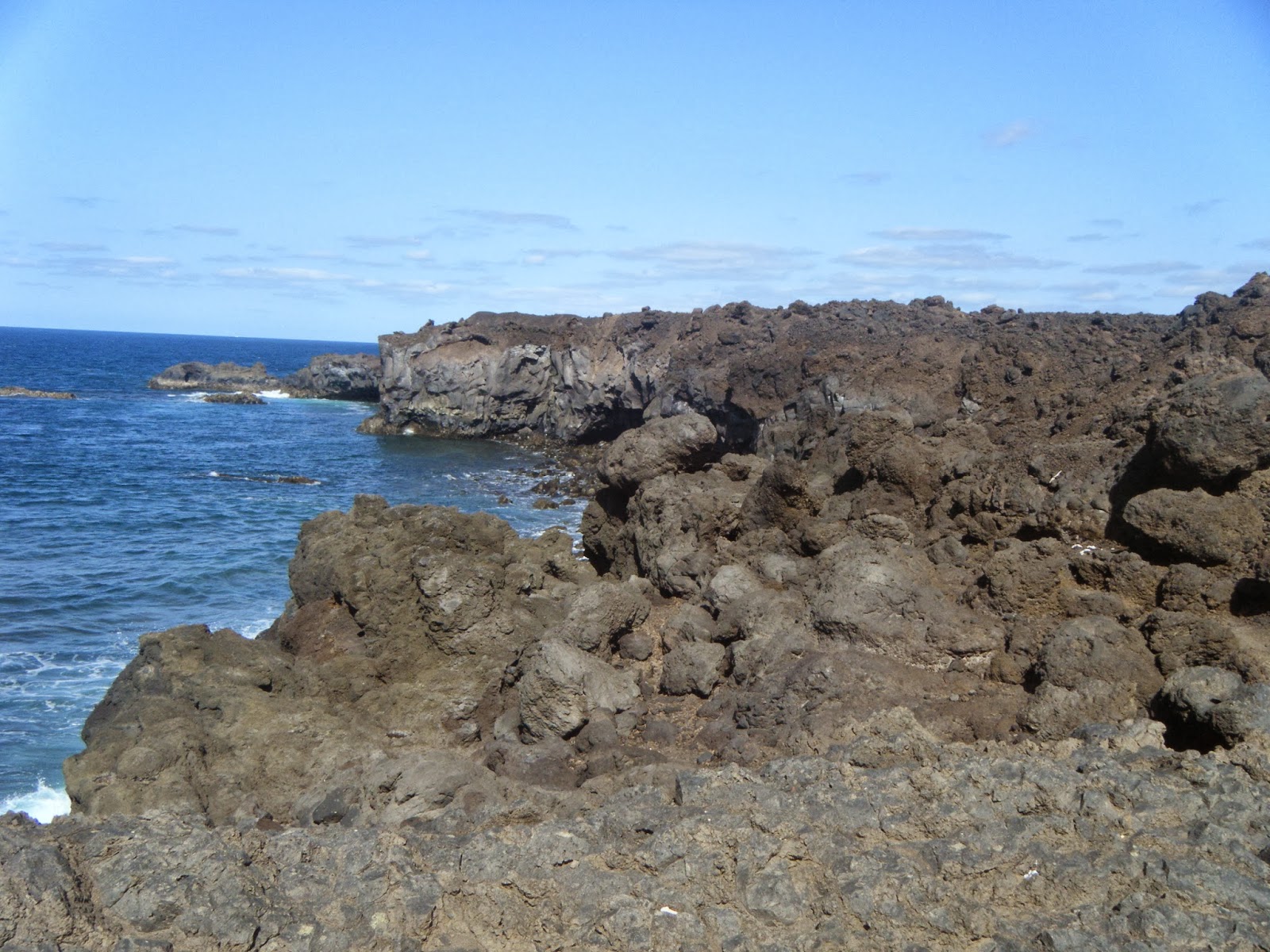 Having dropped of Paul who we had met on the flight and given a lift to too his villa, we arrived at our hotel.  The lobby was large and the décor still residing in the 1970’s. The room was a long way along a corridor and down some stairs, (there was no lift down). We were starting to worry about the view we wouldn’t have in the basement.  Once at the room we were gladly proved wrong. We were right on the sea front with great views across the Atlantic.

On the balcony, I removed the bike from its case.  Put the wheels and pedals back on and re-fixed the handle bars. All looked good. 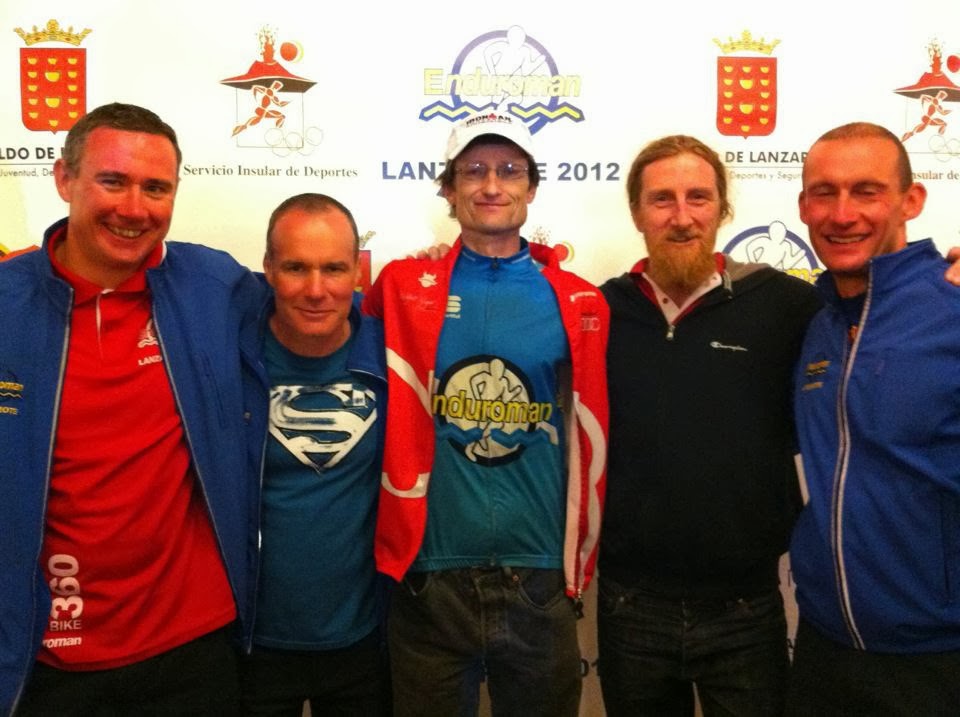 On Wednesday there was an invitation to be walked around the transition area.  Here I met a few other athletes and a swim was arranged for Thursday morning.  At 10 am Thursday we swam the rough course that had been described to us and then arranged to meet at 3pm for a recognisance of the bike course.  It felt like it was going to be quite fast.  A slog out of town up rolling hills that generally went up.  Then back down to the coast in another place. Turn around, up to the top of the hill and then a fast ride back to the start. 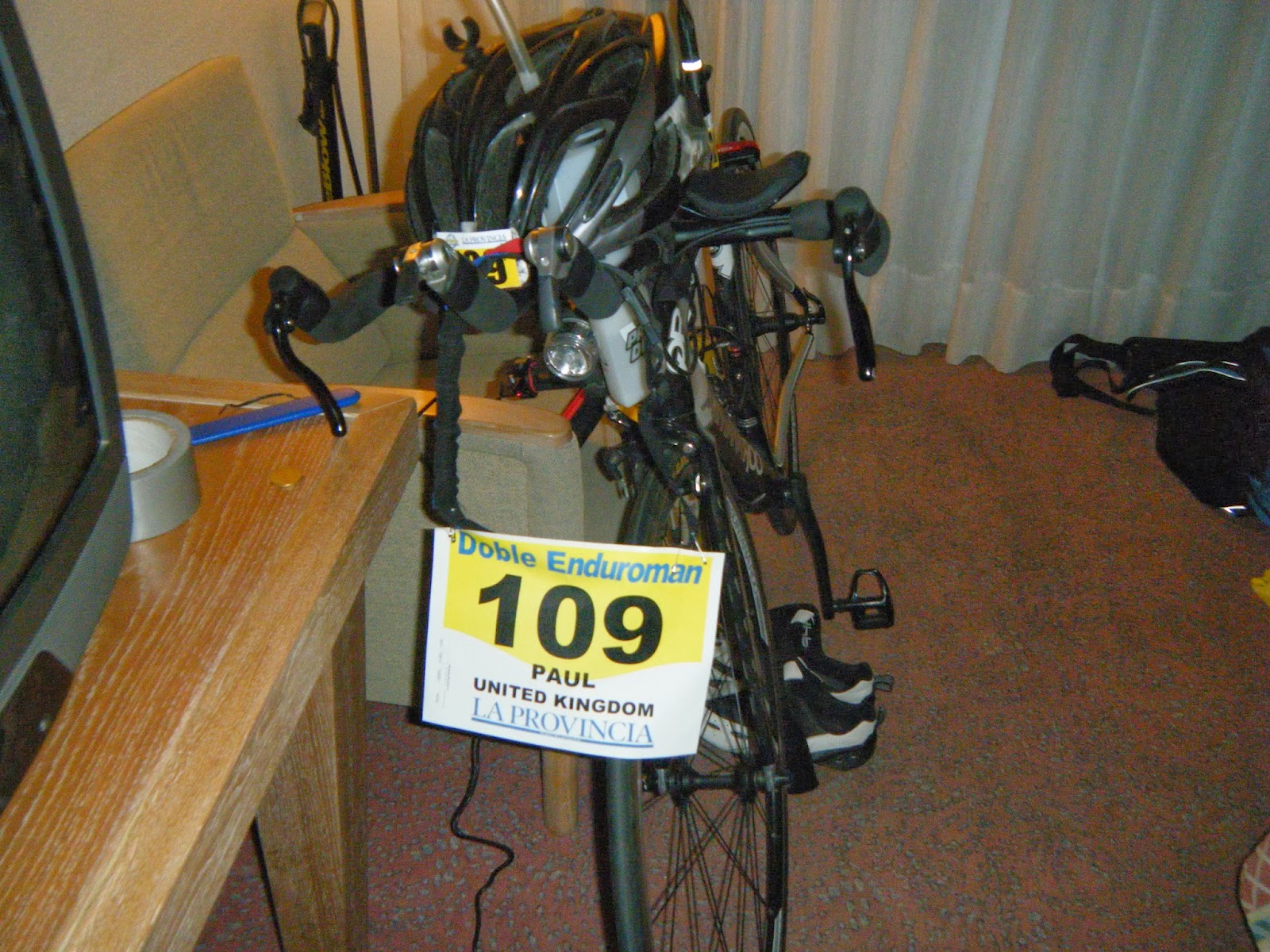 Friday was a rest day. Then Saturday at 10am it was time to rack the bikes. At 2pm we were all ready, in our wetsuits and stood on the beach.  A big crowd was watching and a PA system with music and an announcer telling the crowd we were about to swim 7.6km, ride 360km and then run 84km.  Since my arrival on Tuesday the wind had steadily increased.  It was now at 35mph with gusts of 40mph.  The bay was sheltered but the waves had picked up a little in the wind.  It still looked ok to swim in, but a bombshell was dropped.  There were under currents and it wasn’t going to be safe to swim. 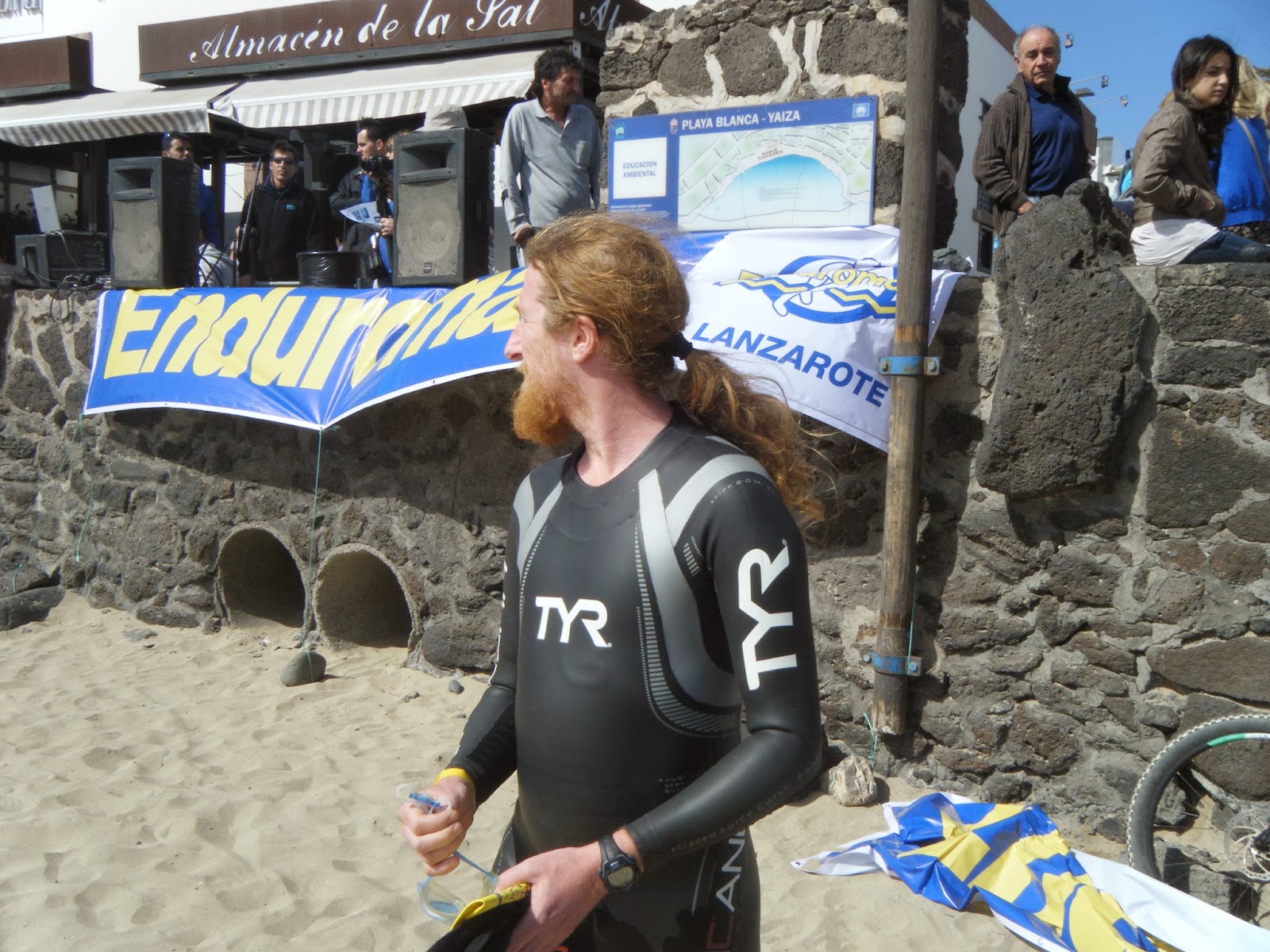 The race was postponed until 4pm and was going to start with a ½ marathon instead of a swim.  I think I wasn’t the only one who felt disappointed, but safety must come first. 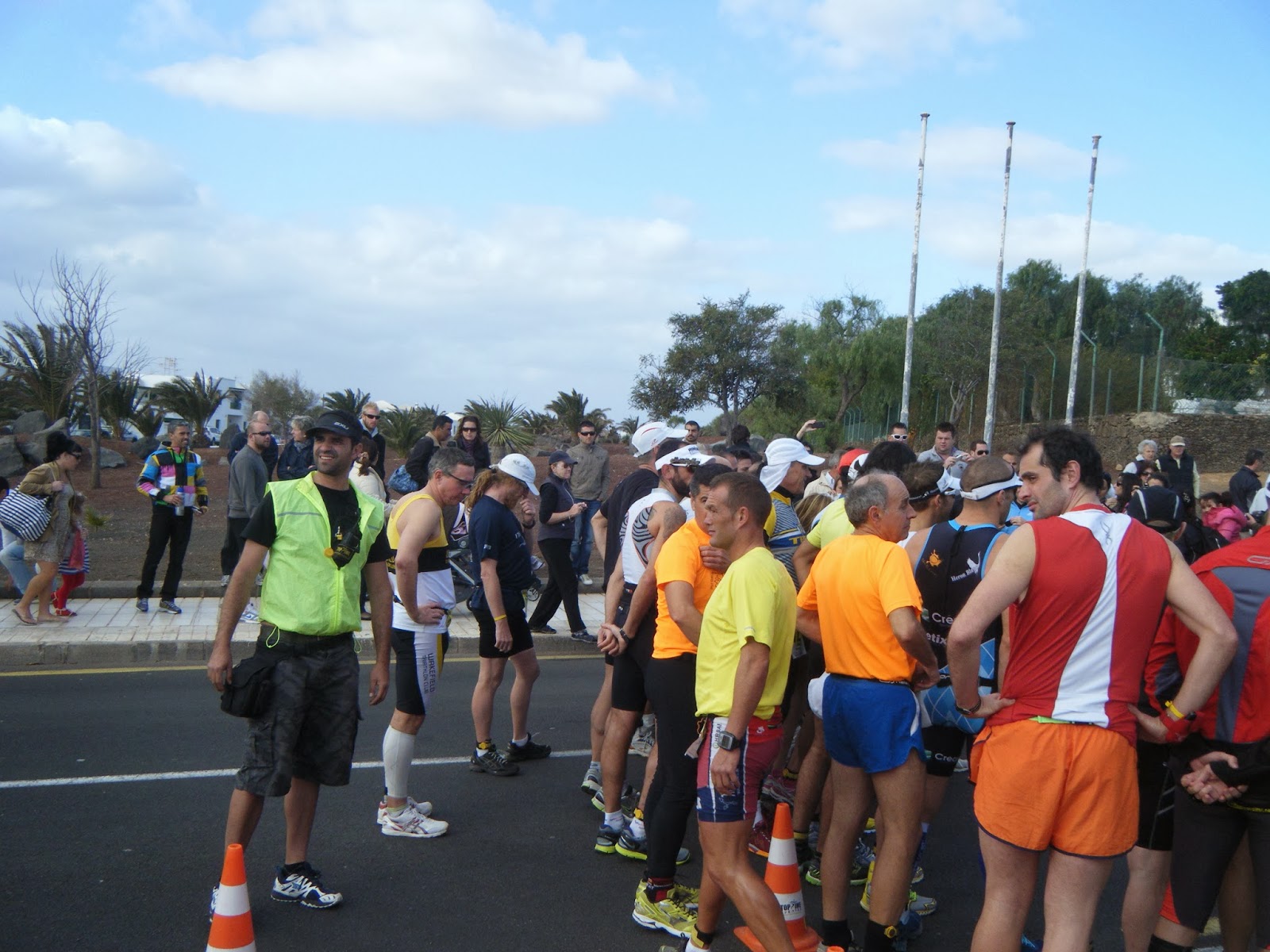 At 4pm we lined the start and set of running.  It was 8 laps of the run course and was soon over. At 5:30 I was on my bike heading out of town.  The wind was stronger than anything I have ever ridden in. For the first lap of 30km I didn’t get into my aero bars, as I was scared of the crosswinds and gusts.  You would turn a corner and be blown completely across the road.  On the turn around I grabbed a Snickers to eat and told my wife, Maria,, who was my only support crew, I wanted pasta and lentils when I returned in 1 hour and 20.  This was what my lap times were going to be with the wind.  I had planned 1:05, but this was extreme weather and the plan had to be changed on the fly.  I turned on my lights, as it was starting to get dark and set off into the wind again. 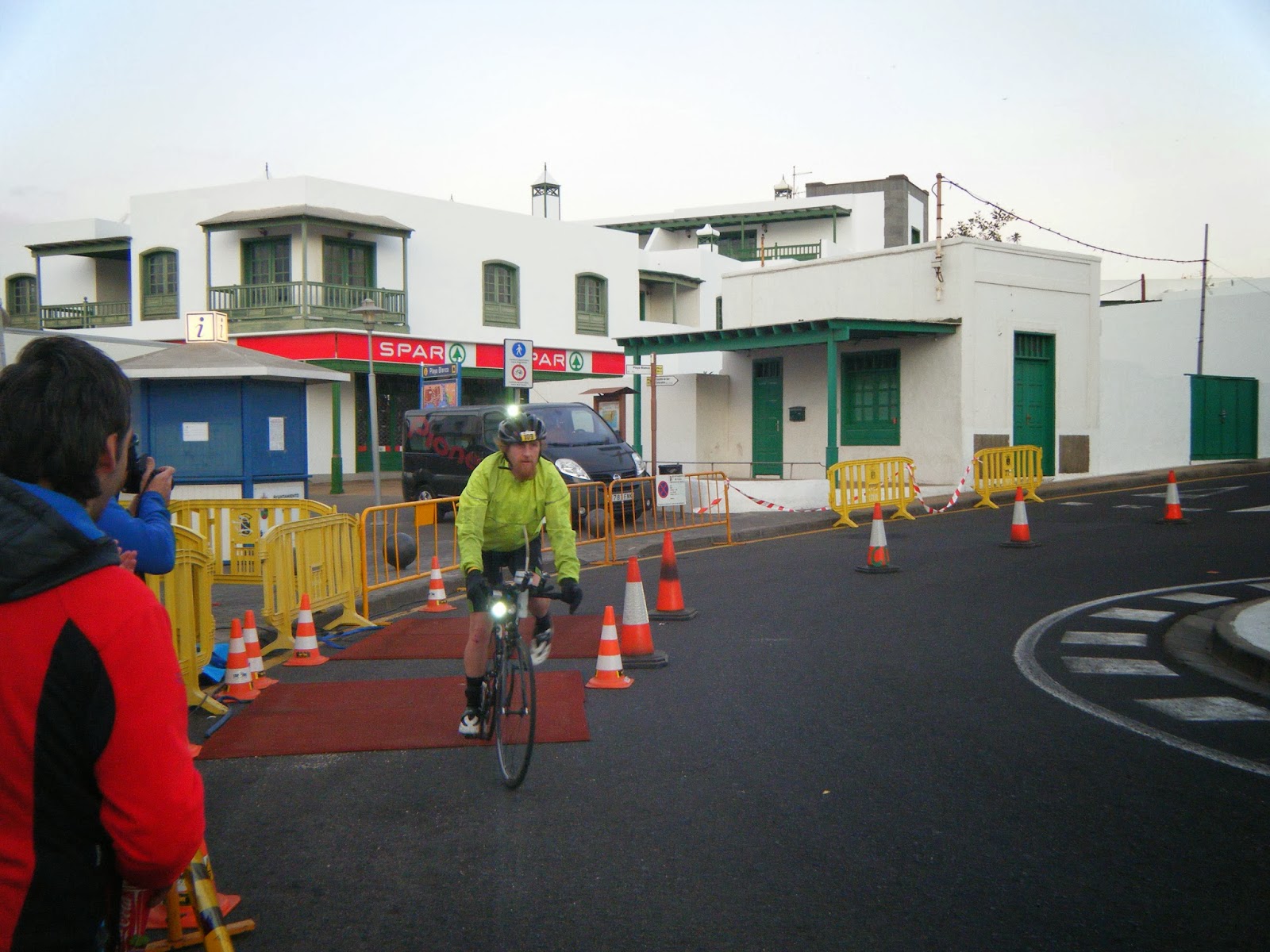 During the night the wind got worse and laps 7 8 and 9 were very difficult. On lap 10 the wind was blowing sand in my face on the far turn point and as I couldn’t see where I was going I tried to stop. As I unclicked my left foot a gust of wind blew me over on my right hand side.  A grazed knee and some hurt pride was the immediate damage.  I’m not sure if this affected my run later as my right leg really gave me pain in the marathons.  I got back on the bike, refilled the water I had lost and turned around the turn point and back to town.  It was half way through lap 11 for me when daylight started to creep over the horizon and I rode the last lap and a half in daylight again.

When I started the ride in the evening I was wearing only a t-shirt.  The race requires high-vis through the night and my t-shirt was a high-vis yellow one.  I planned to put a long sleeve shirt on under it as the night got colder, but I hadn’t felt cold.  I had had comments like.”do you need anything?  Some clothes maybe?”  at the turn around/aid station, so it was cold out there.  On my lap 6 stop I had gone up to the support crew room and after eating started to shiver uncontrollably.  It became clear that I was almost hypothermic, because it was cold and I wasn’t feeling the cold.  The shivering really enforced this idea. So my power nap was under a blanket and trying to get warm.  Before I went out for lap 7 I put on my long sleeve shirt ,my high-vis Jacket and another pair of gloves.  This solved a problem I didn’t even know I had.  It reinforces to me how important crew is for a race like this.  When you are racing for so long, you lose your ability to think rationally and you need a crew to do that for you. To make sure you are dressed correctly and eating correctly! 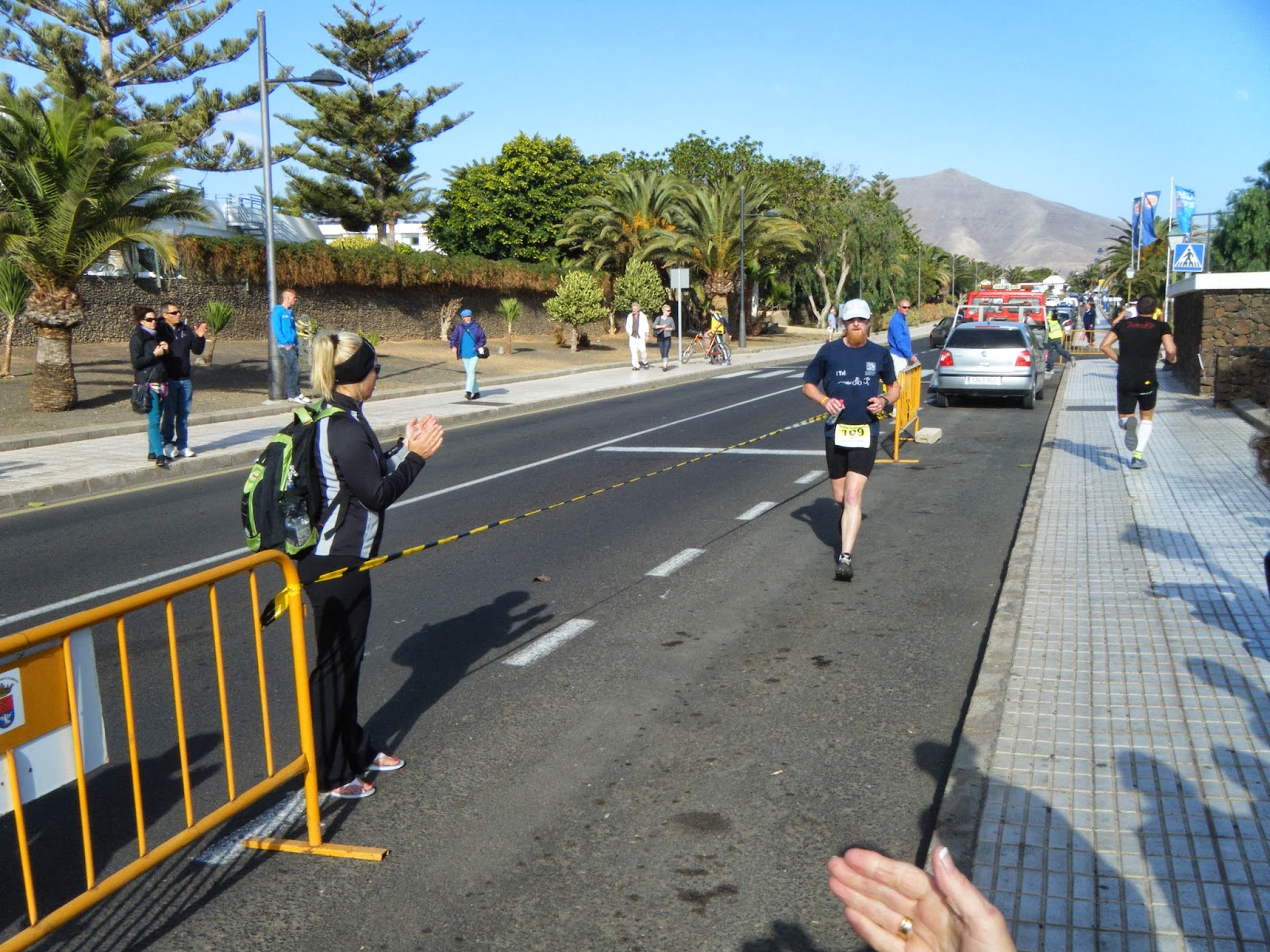 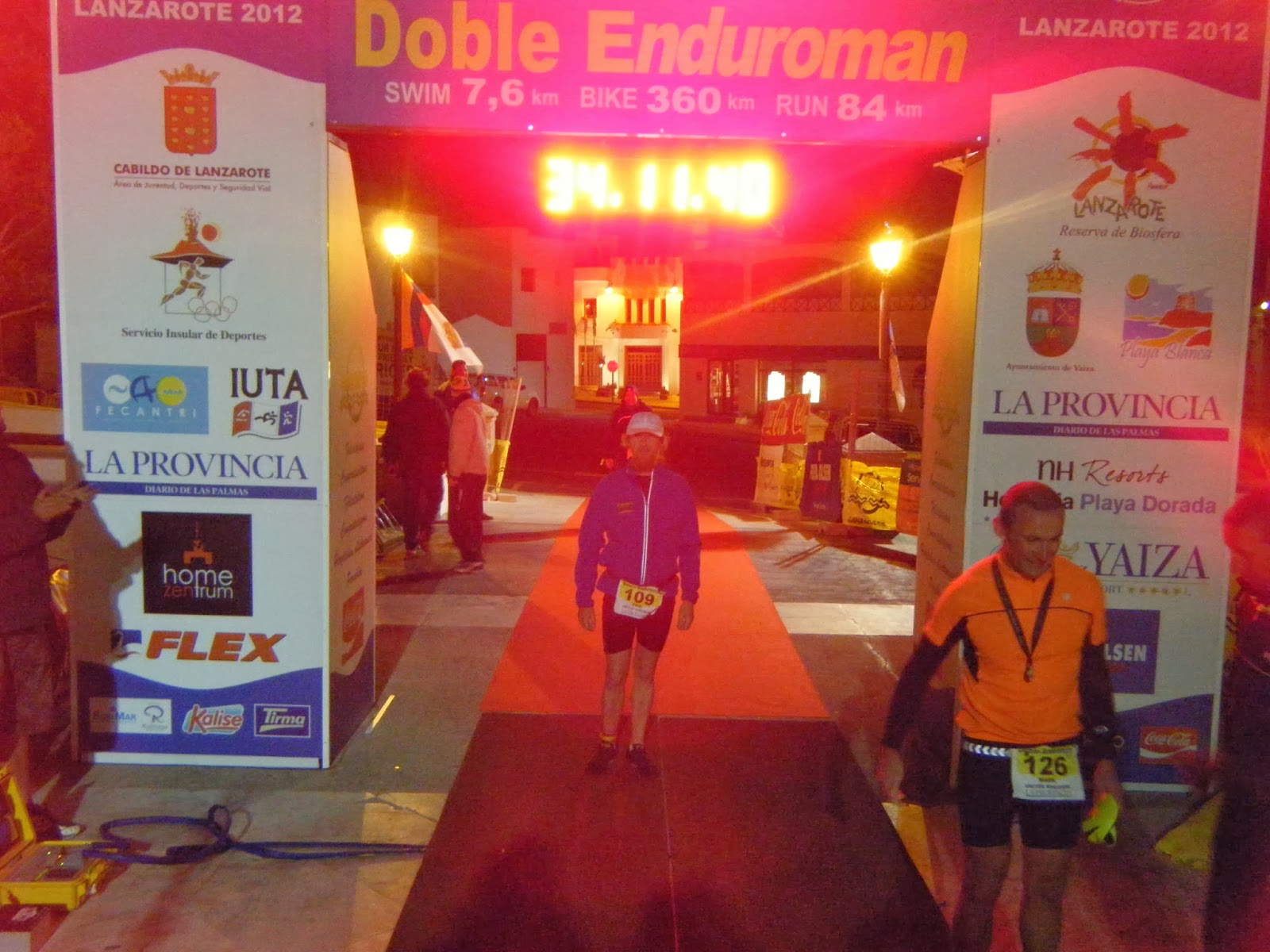 The run started off as planned, walk up the hills run down them.  32 laps required and I was running at around 21 minutes a lap.  On one of my walks a fellow athlete tried to get me to run with him, but I was determined to stick to my plan as running to much would make it harder later.  It got harder later anyway.  The first ½ marathon went well.  Then it descended into more and more walking and a pain in my right leg which made it almost impossible to run.  As there was aid stations on the run I had told Maria to go and have a sleep.  Twice I went off the course to our room to try and sort out some blisters on my left foot.  I was barley walking now.  After the 1st marathon was completed Maria came back to support me.  I gave in to my no pain killers rule and took an Ibuprofen.  With this and Maria now back helping I was able to pick up the pace and with a determined grit I power walked/ marched until the end.  Not stopping at aid stations and Maria feeding me by running along side me at the crew station. 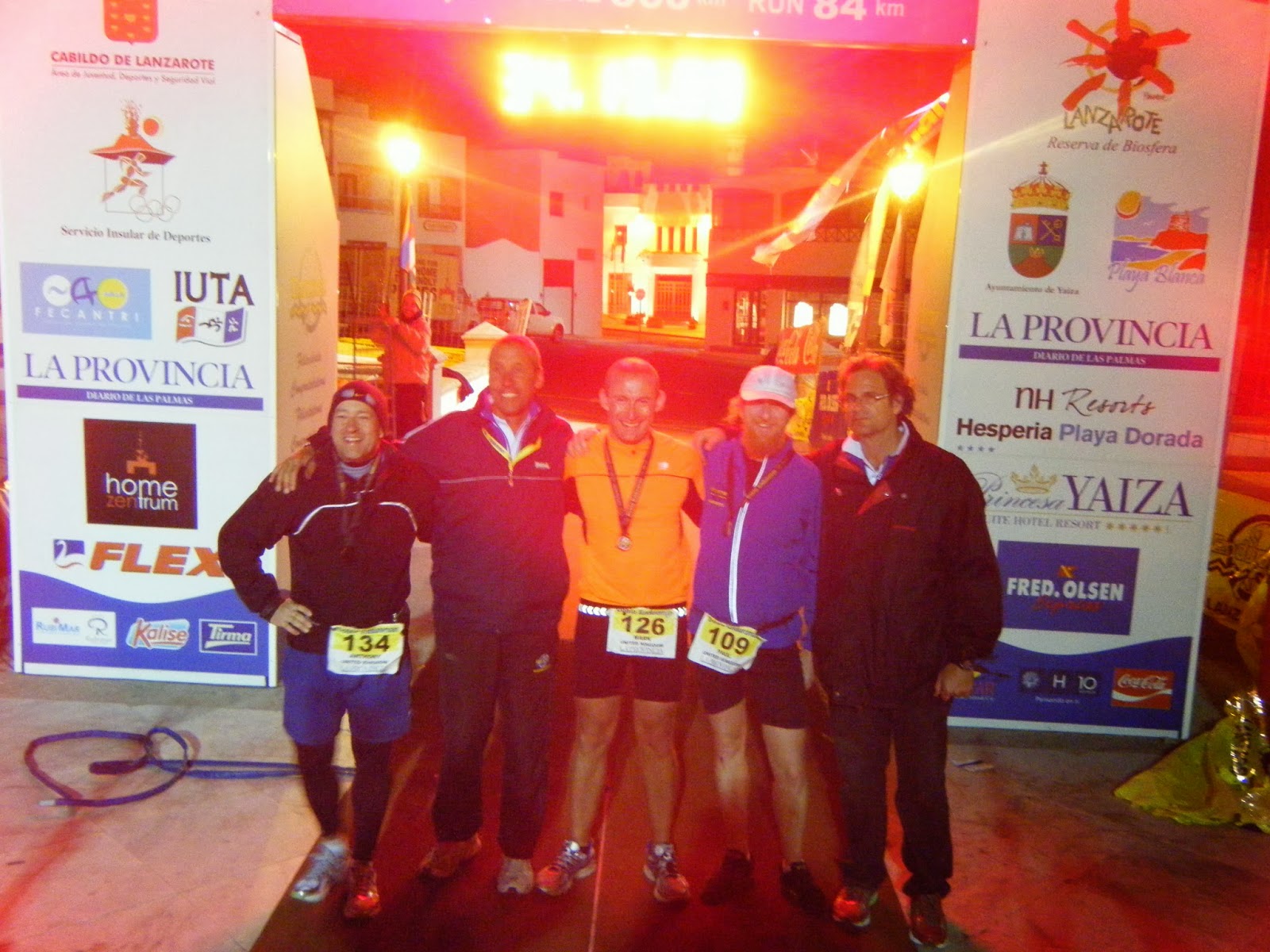 This was a fantastic experience.  The camaraderie of the athletes and organisers is empowering and really helps drive you to the finish.  There were 38 starters, and I feel proud to say, on a first attempt at this distance, I was one of the 15 finishers.  I also have to thank Maria for crewing for me and staying up all night with a cold to keep me in order , fed and safe.  This is the first of many doubles I am sure and I can’t wait to get back on my bike and out there again! 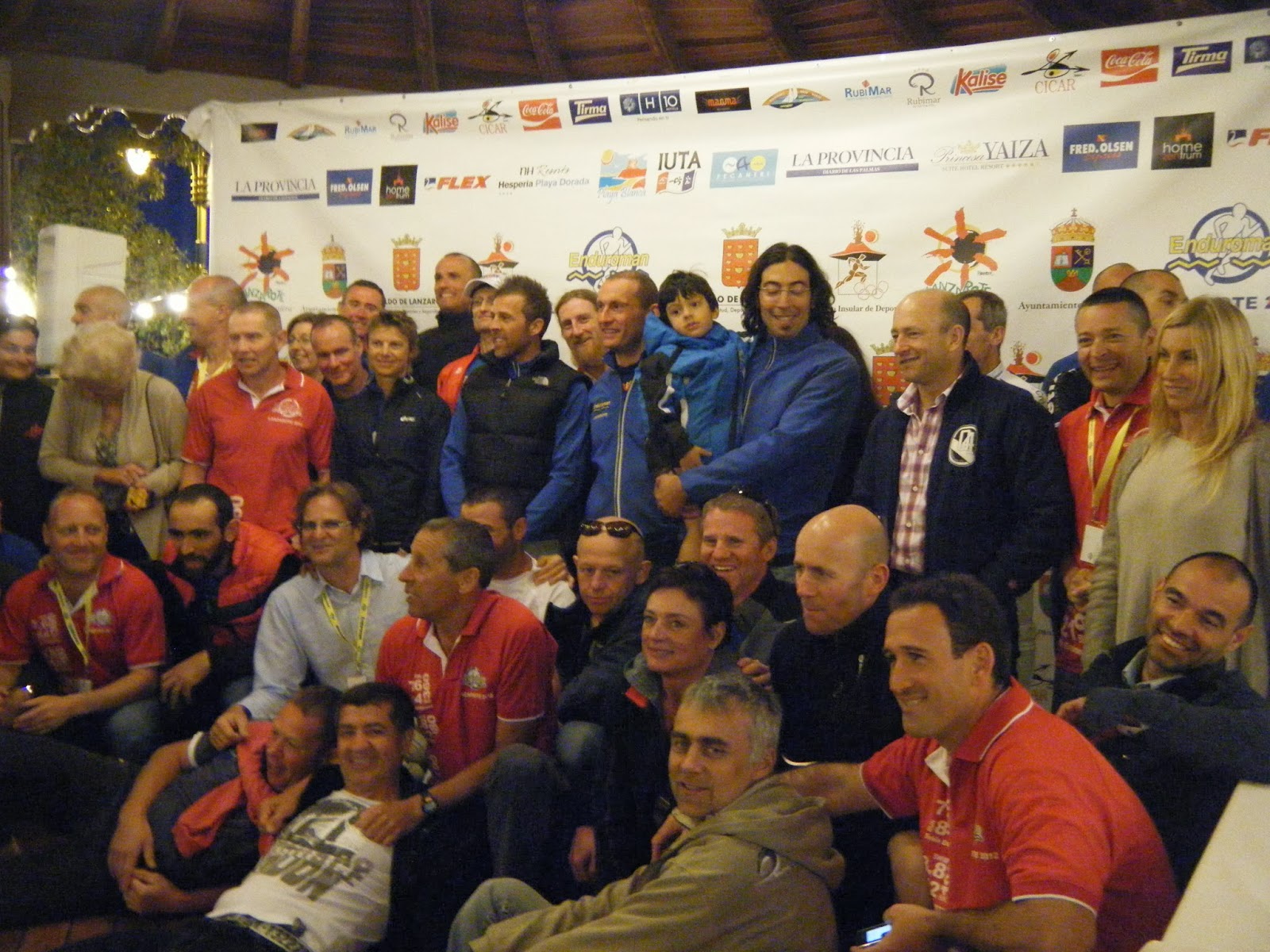