This was my second time running in this event. The weather the previous year made for a difficult race and also fogged out the views.  Despite of this or because of it, I had really enjoyed the race from the bed and breakfast I had stayed at the night before to the finish line food.  Centurion have the rolling picnic, for that’s what the aid stations are, down to almost perfection.

The train journey to Worthing is a difficult and long one from Oxford. Luckily I have a work colleague who lives ½ way, so gave me a lift in 2013 and we had planned to do the same this year until I had a better offer from Bill.  Bill had also signed up for the race and lives close by.  He had given me a lift to Marlow ½ iron in 2013 and offered me a lift to the SDW 50.  He even kindly picked me up from work at 5.  By 7:30 we had arrived at the bed and breakfast. We went out to eat and finding the local pub to noisy ended up in the fish and chip shop.  So it was bean burgers and chips for my pre race meal.

After an evening watching the BBC (I don’t have a TV so it something different for me) and a restless night I woke up at 6 am. Waited until 7 (more TV) as we had arranged for breakfast at 7:30 and went down.  We had breakfast.  I had toast and marmalade, vegetarian sausage, hash browns, mushrooms, tomatoes, and muesli with orange juice on.  All washed down with black tea. 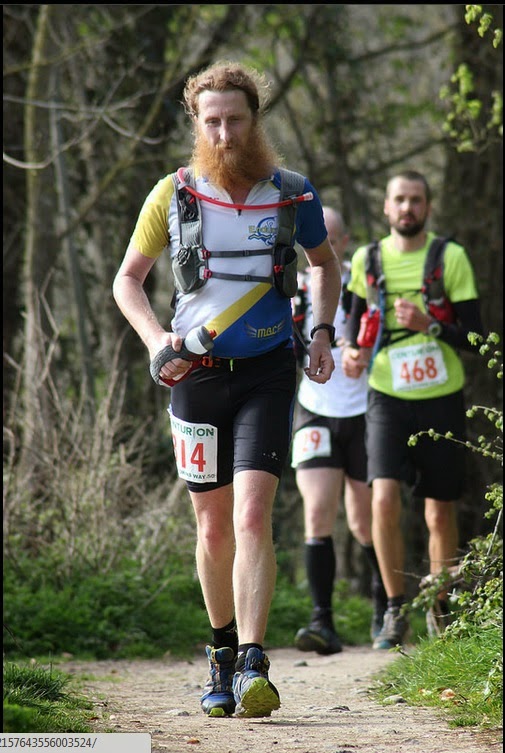 The race start was well organised, as is to be expected from Centurion Running.  A quick kit check gets you a casino chip.  This is handed over at another table to get your race number.  Then it’s the hanging around waiting for the start. I saw quite a few people I already knew from the Ultra scene and the time soon went chatting. At exactly 9am we were off.

I had spent the winter training differently to last year.  Out went the quantity and in came the quality. I had run less but with more purpose. I did a track session once a week, which is speed work.  I did one double day, which is 2 x 12 miles to work and back and one weekend run, which I kept to 2 hours max.  Then once a month I did a long run of 4 to 6 hours.  Most of my recovery runs were done on the bike.  I cycled the 12 miles to work the 4 days I didn’t run in. I also did some long walks at the weekends.  For this race I wanted to see how this had affected my running and how my fitness was.  I had a finish time in my head of 8 hours 20 minutes.  This was over 1 hour faster than I had ever run 50 miles and 3 hours faster than this race last year. It was ambitious.

I started near the front, as I didn’t want to get caught walking up the hill at the 2 mile point.  Here the track narrows and as people start walking you can’t pass.  I made it to the narrow path behind people who were able to run up it and was also able to run up it, and fast walk the steeper part in the middle.  I hit the first aid station 20 minutes up on my 6mph plan feeling good.  From here I slowed and hit the ½ way point on target.

Most of my race was consumed with thinking and analysing.  In 2013 I had run the South Downs Way 100 in 20 hours and 26 minutes.  I had had a target of sub 24 at the start and at around mile 75 I knew I was going to get sub 24 and would have happily walked it in.  There was only one problem with this, a guy called Gary!  We had passed each other on and off for 75 miles. Had a few words and run on or dropped back, running our own race as is often the way in a long distance event.  At around 75 miles we were again together.  He turned to me and said ‘we may as well run this in together’ and I agreed.  This turned out to be a huge benefit as we pushed each other on and took less walking breaks than I am sure we would have had we been alone. This came up in my head again during the 50. I was often asking myself ‘would Gary let me walk this?’ and replying ‘No’ and running it. The memories of the SDW100 and the result drove me to a conclusion that we often set achievable targets and that this is a bad thing, as when we reach them we settle for them rather than push for better.  You of course need to be able to deal with not hitting an aggressive target too.  When a target is missed we can also give up and then miss it by a long way.

I ran the whole race alone and didn’t team up with anyone. I could have finished comfortably in sub 9 but pushed for my 8:20 missing it by only 15 minutes and making a new PB into the bargain. Yes I had gone off too fast, which is usual, but I wasn’t bothered by this I wanted to see what pace I could run and for how long. I know I can run faster and now have a good training regime, which will facilitate that.  The race told me what I needed to know from it.