Sunday morning I woke up at 6:30 am. It was already hot.
I had flown to Greece straight from work in the UK on Friday night. Arriving home at 5 am local time. At 10:30 am Saturday I was sat in the theatre watching my daughters school play. I went to bed at 11:30pm after packing my transition bag and giving the bike a once over.  Not the best preperations for a race, so I had no expectations.

This race was a over a new course and organised by the Schiniathlon organisers.  I arrived, checked in and laid out my gear.  The sea was about 20c. So wetsuits were optional and not being a strong swimmer, I elected to use my wetsuit. We started just in the water to avoid running over a stoney area near the shore.  The swim followed the bay out to sea then turned about 120 degrees to follow the coast along. then a another turn back towards the start and around again.  I like to start to the right at the back when a swim is anticlockwise, but this was the side where the bay jutted out and at about 100 metres into the swim there was a few rocks that came almost to the surface.  So I started slightly left of my usual place and got into the washing machine more than usual. About a 100 meters in I noticed everyone in front of me had stopped swimming, so I tried to swim to the left of them.  Then I saw the problem.  There was only a narrow gap between the rocks beneath the surface.  I ploughed my way through just catching the rock on my left arm.  Then upto the buoy and a sharp turn left.  From here the swim was plain sailing and I worked my way round the 2 lap course without incident.  It felt like I actually managed to swim straight.  Usually I drift right.

I exited the swim. Ran up the mat to the transition area, a concrete basketball area right next to the beach, and got my wetsuit off.  I was a bit shaky and not so fluent putting my bike shoes on and helmet etc. I ran out of T1 and got passed by 2 people as I flaffed around clipping my shoes in.

The bike course left transition and went straight up a hill.  That woke my legs up.  My bike computer had decided to stop working.  After the race I checked and the pickup on the fork had moved so that it was to far from the magnet that spins around on the wheel.  After 6km the course took on a loop that we went around 3 times.  It was undulating, with some small inclines to get up and a couple of nice fast stretches.  There was one water station and a some gravel on the course. I only had 1 bike pass me when we went up hill and I over took him on the flat. We tussled like that for a few km until he eventually disappeared in the distance, being a bit braver than me on the gravely part of the course.  After the 3 loops we returned to the transition area via the road we road out on.  Coming over the last hill I tried to change up to my big ring, but the bike wouldn't have it.  I got the biggest gear I could on the back cassette, but still couldn't feel any thing when I peddled so I coasted down the last hill and into T2. 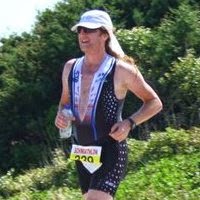 At T2 I took my helmet and bike shoes off.  I tried to get my socks on (I cycle without socks then run with them if it's further than 5k).  My feet were too sweaty so I gave up with socks and threw them in the transition box in frustration. I slipped my running shoes on, grabbed my cap and a bike bottle that had some high 5 carb stuff in it and set off on the run.  I took the bottle as i didn't know what to expect on the run.  I ws glad I did.  The run was an out and back 2.5k run along the coast road with no shade, so very hot.  The run started of on a small incline.  I took it easy, sipping from my bottle and trying to make sure I didn't mess up by over heating my core. The incline carried on and on.  The first 2k was hard work.  Then it went up at a steeper incline and at the top was a water station.  i poured a bottle over my head grabbed one to drink and left my bike bottle.  I started to run on and was shouted at.  This was a turn point and I had to head back to the transition area.  So it was all down hill and I only had to get there and do it all once more.  Suddenly it started to feel good.  I picked up my pace a little now I knew what was out there and ran back to the turning point for the last lap.  I completed the run feeling good and enjoying the race, but my feet suffered a bit with rubbing on the backs from not wearing socks.

I didn't know what to expect with this race.  I had only ever done this distance once before and that was on a dead flat course that I knew well.  That time I had done it in 2:37. So for this race I knew 3 hours was going to be good for me, with the hills on the run and bike. When I finished at 2:49 I knew I had done well.  Also the out and back run gives you an idea of who is in front of you.  I was over the moon to find out that I had, at last, made the podium in a real race.  (I got first in AG once, in a race but I was the only person in my age group.)  Now to lose a few more pounds/kilos/stone and I may get up those hills a little faster.