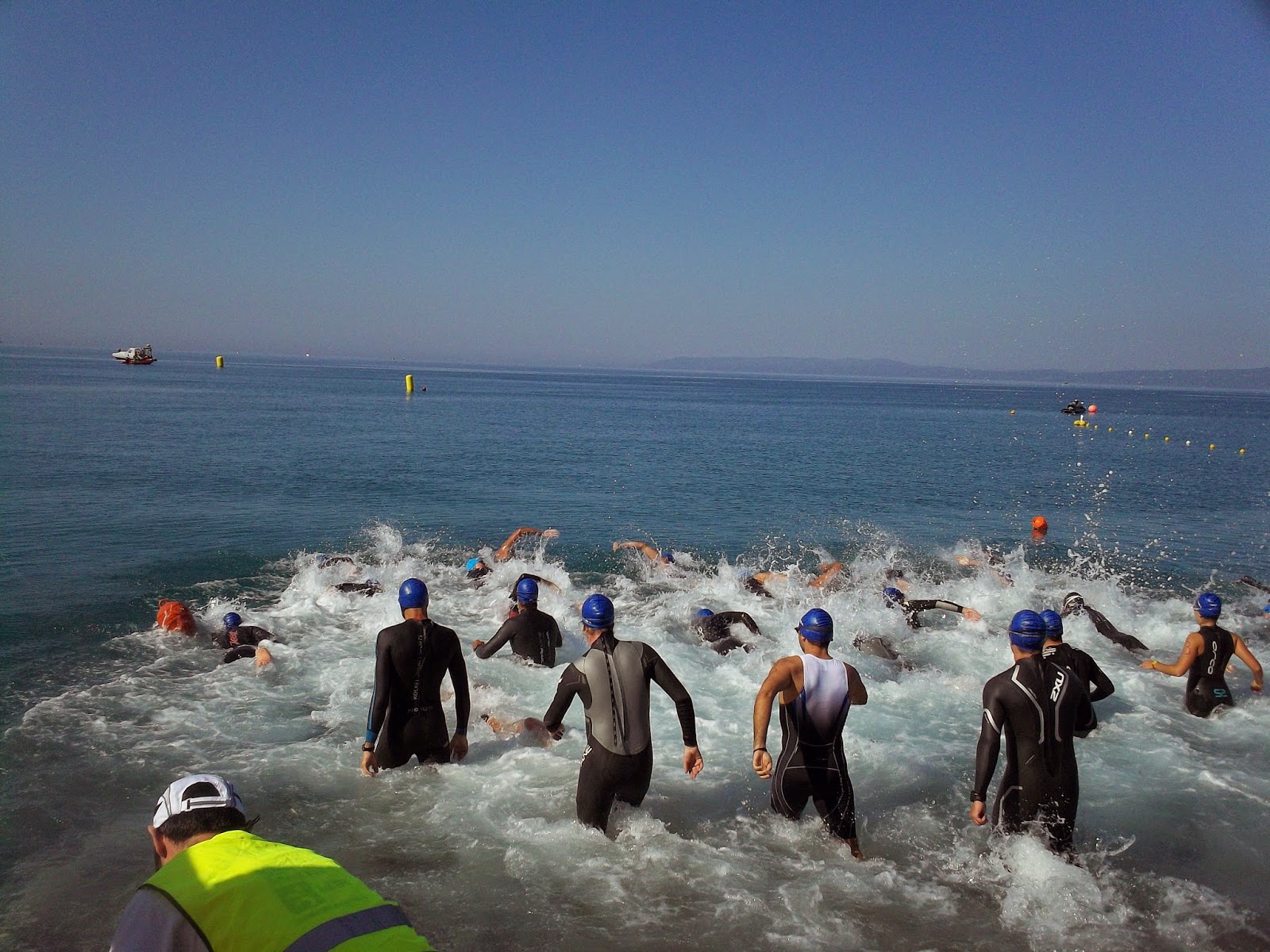 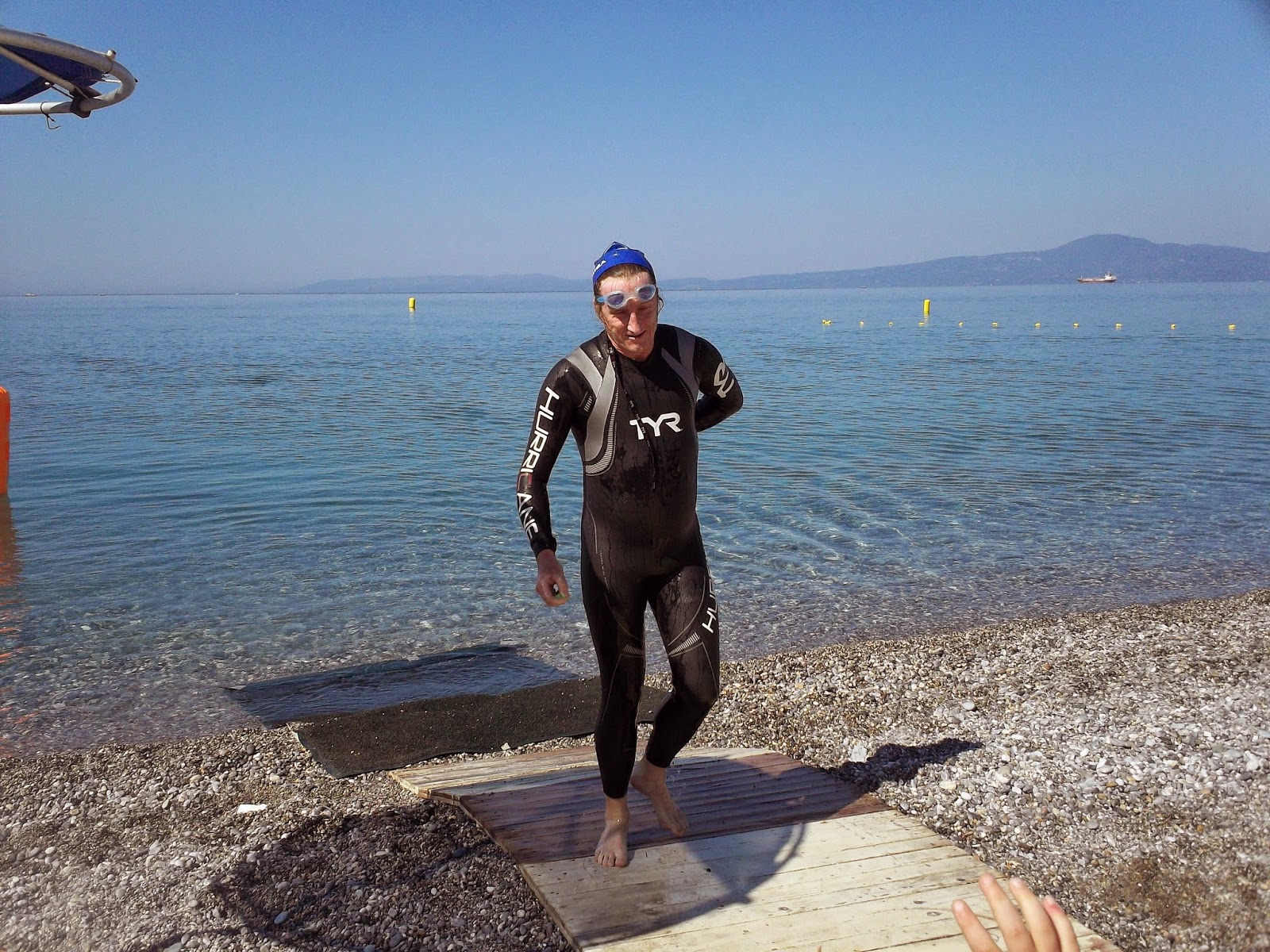 I had registered on the Saturday and attended the race briefing.  Having worked out the routes etc from the maps on the website and the small details from the pictures at the briefing. Due to the language barrier (the briefing was in Greek only) I didn't understand all the dialog, but got enough to know what was what.  It was going to be a 2 lap sea swim.  Out to the second bouy around a square twice and then back to the shore.


The race started at 9:30am from the shore.  It was wetsuit legal as the water temperature was 20 degrees. I stayed at the back of the 40 starters as I am a slow swimmer.  The first 150 meters or so went well and I managed to stay in the bubbles of the front guys.  We rounded the first bouy with no incidents, just the usual crashing into those that stop to sight when they turn a corner. After loop one was done I actually managed to recognise a couple of the other swimmers, whom I was pretty sure were in my age group.  These small races allow you to get to know everyone who competes regularly and you can use that to encourage each other as well as have a good idea where you are positioned in your category. The swim was over in 31 minutes for me, which I was extremely pleased with.  Last year 1500 meters would of taken me nearer, if not above the 40 minute mark.  So a great improvement and I am sure this course wasn't short.

The swim over, it was a short run up to T1.  Wetsuit off, shoes on.  I still haven't trained with them clipped onto the bike. T1 went smooth and I was very quickly on the bike out on the road. 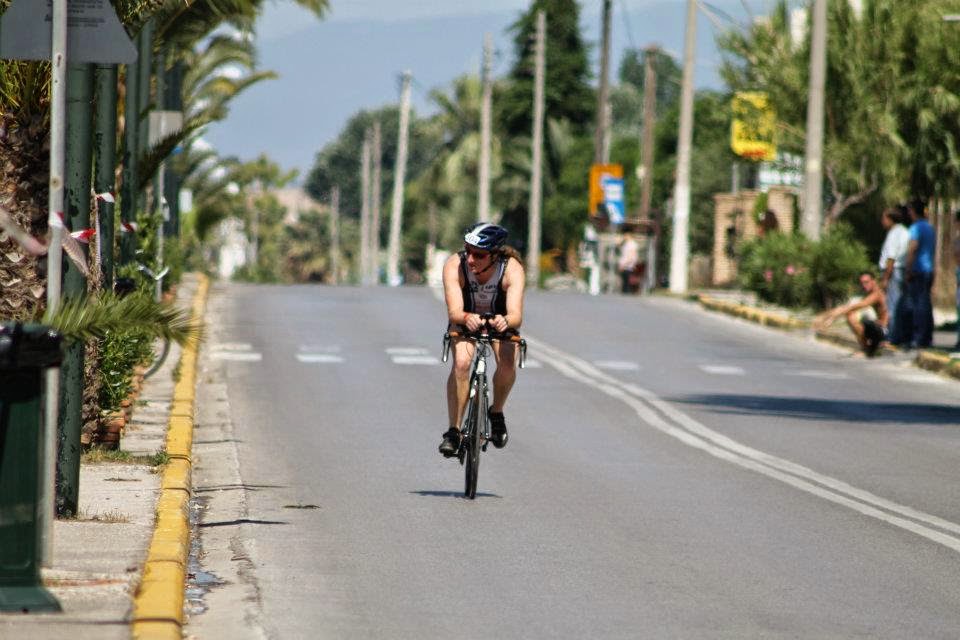 The bike course was over a closed circuit along the sea front, past the port and a dog leg into the fields.  A 90 degree turn and back to the start. Rinse and repeat.  There were plenty of potholes on the road and I was glad I hadn't bothered bringing my TT bike from the UK.  I couldn't justify £80 each way on the flight for an Olympic distance race. With my £300 alloy 2008 BeOne Briza I was able to overtake one guy with an aero helmet and one guy with a disc wheel!  Coming about 12th fastest on the bike overall.  I do wonder if over 40km I could of 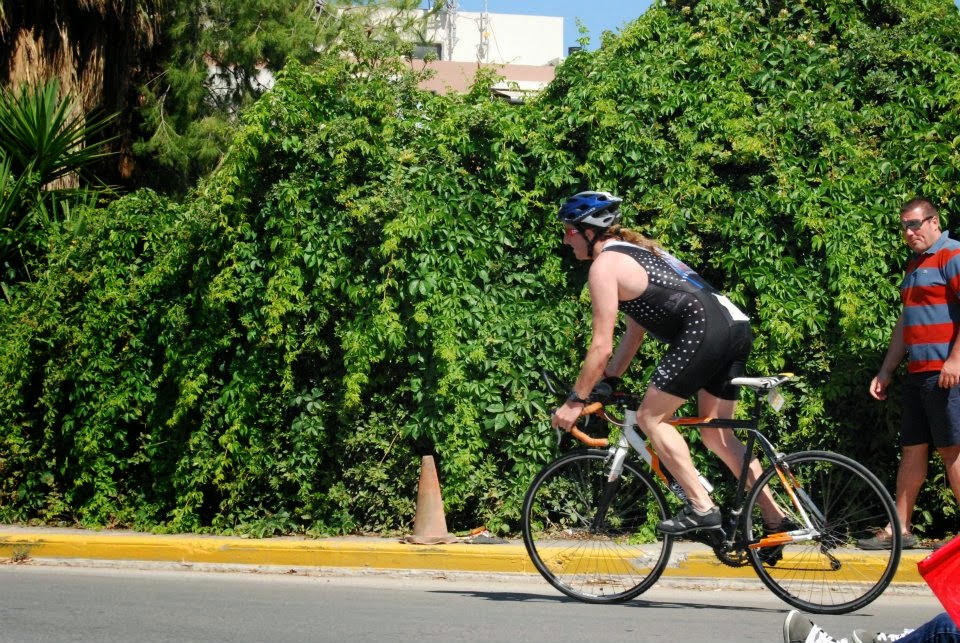 made about a 2 minutes difference with the TT bike, but then the road may of held me back a bit.  As it was an out and back I had the chance to see where I was but I didn't see the other guys that were in my AG.  There was one incident where a car got onto the course and was straight across the road in front of me.  I yelled stop as loud as I could.  Crossed my fingers he would hear and understand and rode around the back of him. A few other cars sneaked onto the course and the marshal's did a great job of getting them off as soon as they could.  Also there was 100% no drafting, which was refreshing.  The referees were very frequent on the motorbikes, so even if someone wanted to draft they would of been caught.  I didn't managed to see the water station, so rode the whole 40km in 28 degrees on 1 litre of water that was already on the bike.  This doesn't bode well for the run.  I really didn't want to dehydrate on the bike. 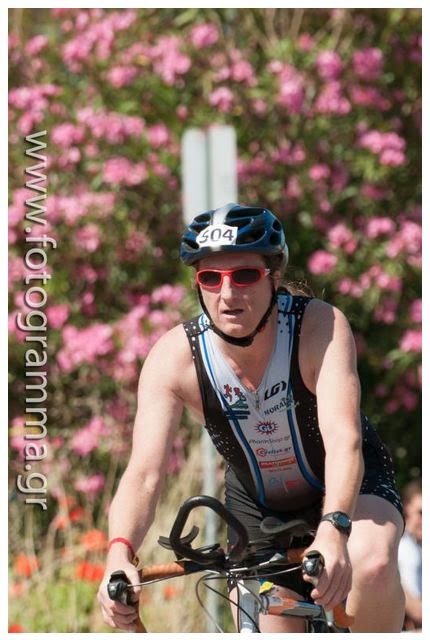 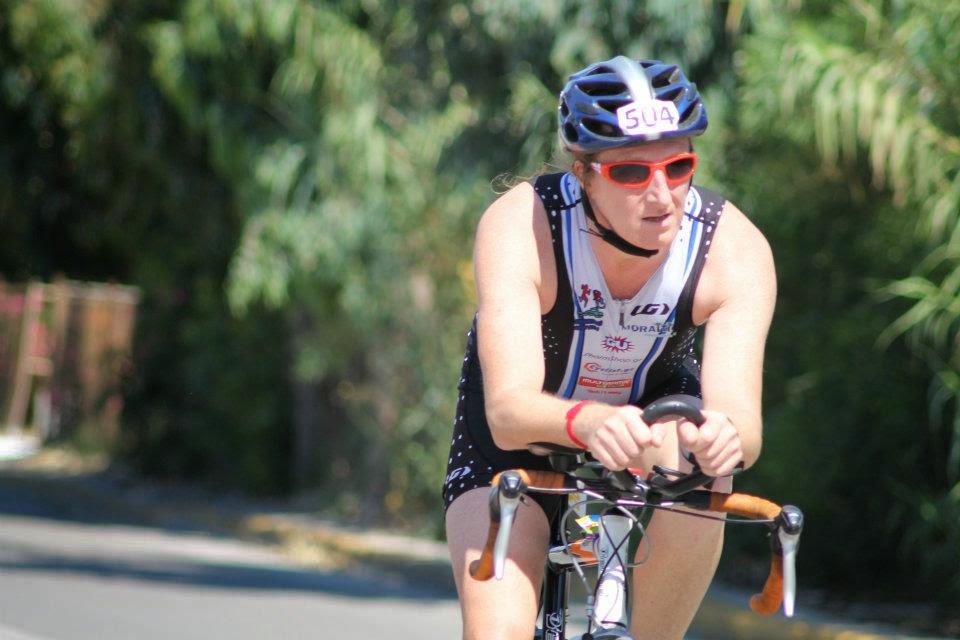 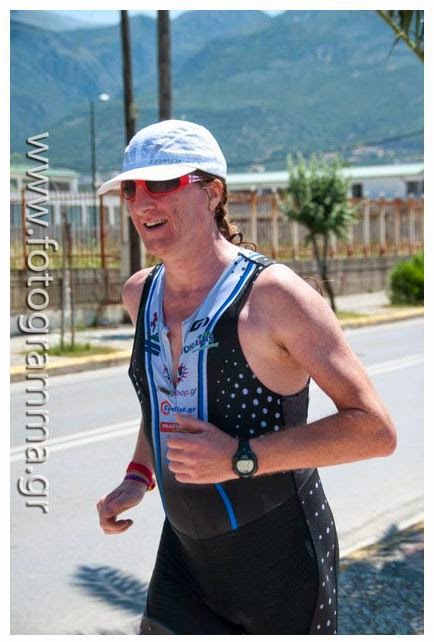 T2.  I tried to get out of my shoes coming into transition.  Not wanting to do it too early I left it too late and only managed to get one foot out by the time I got to the dismount line.  So it was one shoe on and one shoe off as I ran into T2.  It still helped and I was soon out running. 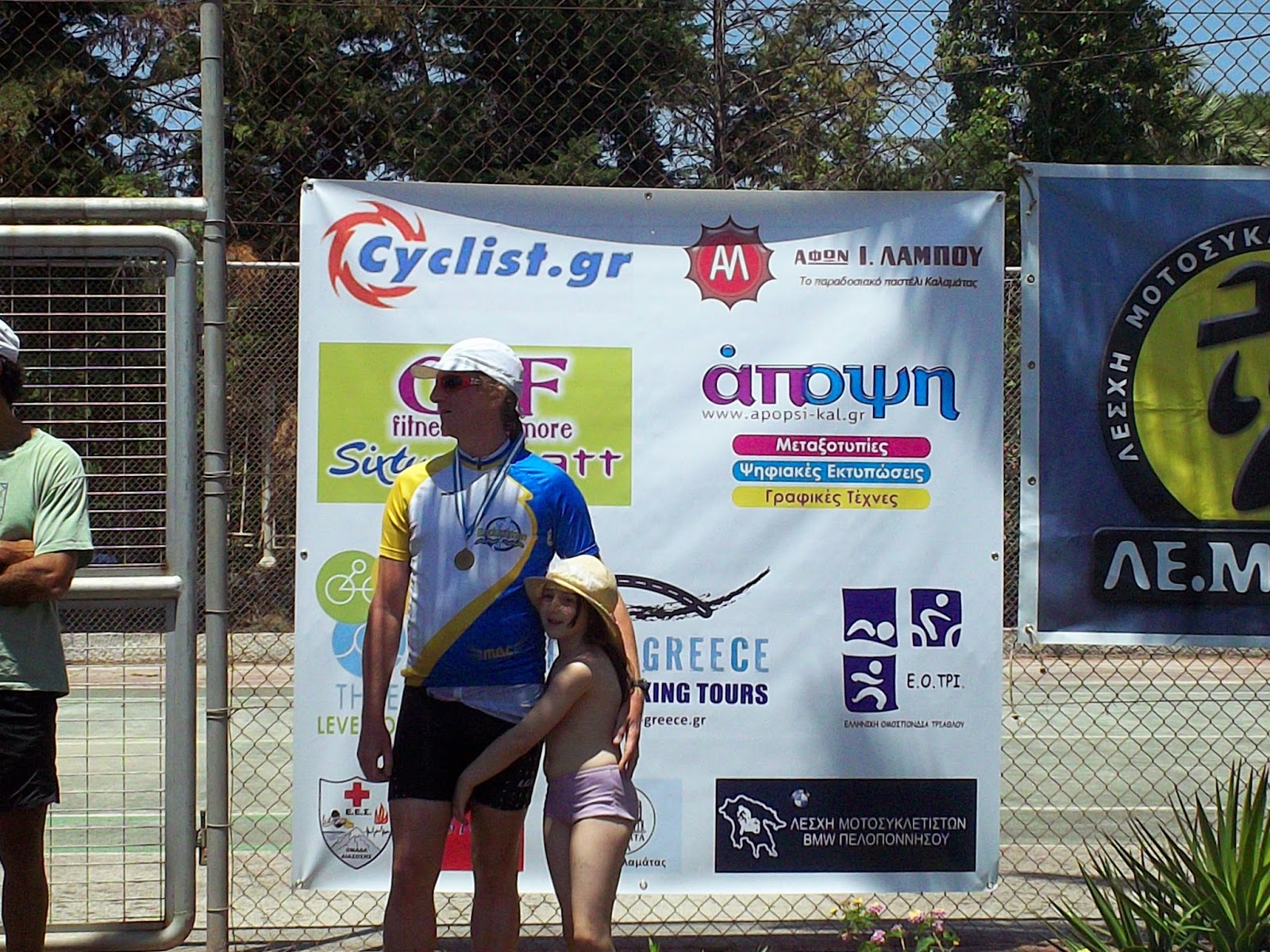 A steady first 1k as I got my blood flow from my cycling muscles to my running muscles and then a steady even paced run for the first 7.5k picking up a little for the last 2.5k as I could see I was going to break 2 hours 30 minutes and I had also seen  some other runners that were in my category behind me as I passed them on the out and back.  I do like out and back for motivation!  There was plenty of water on the run. Three stations over 2.5km so I didn't dehydrate as I had feared I might. All through the run I took water and tipped it on me to keep cool.  There were no sponges and it was 28 degrees so core temperature was important for a northern European. I had a little hope in my mind, I was placed on the podium.  I looked at runners as they passed in the opposite direction trying to work out if they were older than 45.  An impossible task but takes your mind off the running and focuses you on the task. I was pleased with my run I didn't fade and felt strong to the end.  All the double day 13km runs I had done in the past few weeks really helped the endurance.  Retrospectivly, I think I should of run a little faster.  Hindsight always does that when I analyse a race afterwards. 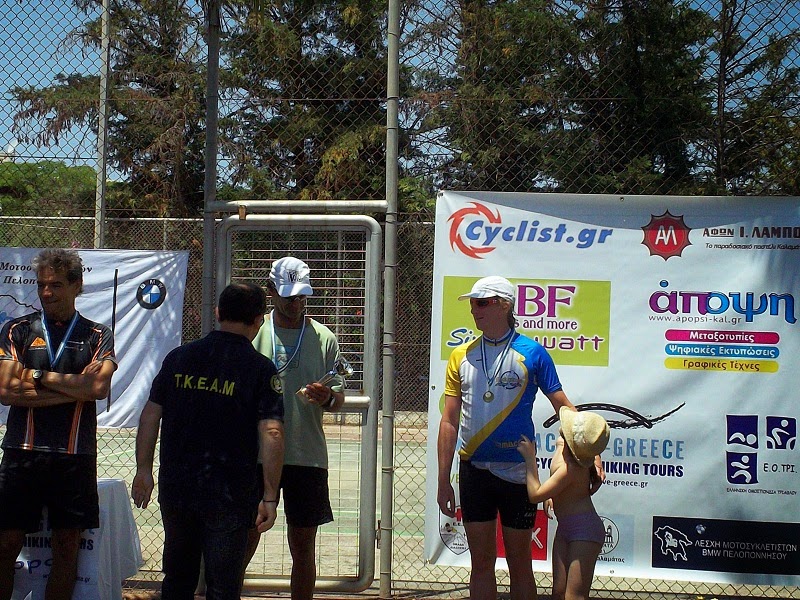 So a bit more swim, bike and run speed work is needed for this distance.  I had just added this race to the calendar as an after thought to fill in where I missed a 1/2 IM due to a date move.  My general training is for longer distances with a view to another attempt at the double IM next February and then some 100 mile runs next year.  So a 3rd place in age group is very welcome.  There is something to be said for doing a race with no expectations and to do it for enjoyment only.  My brief to myself before the race was anything under 3 hours will be good in this heat. 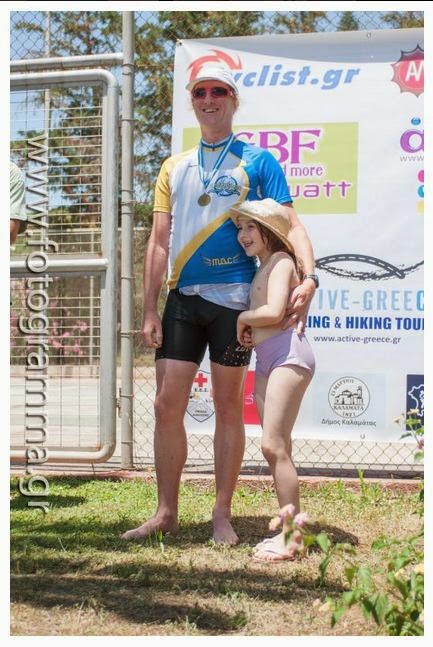 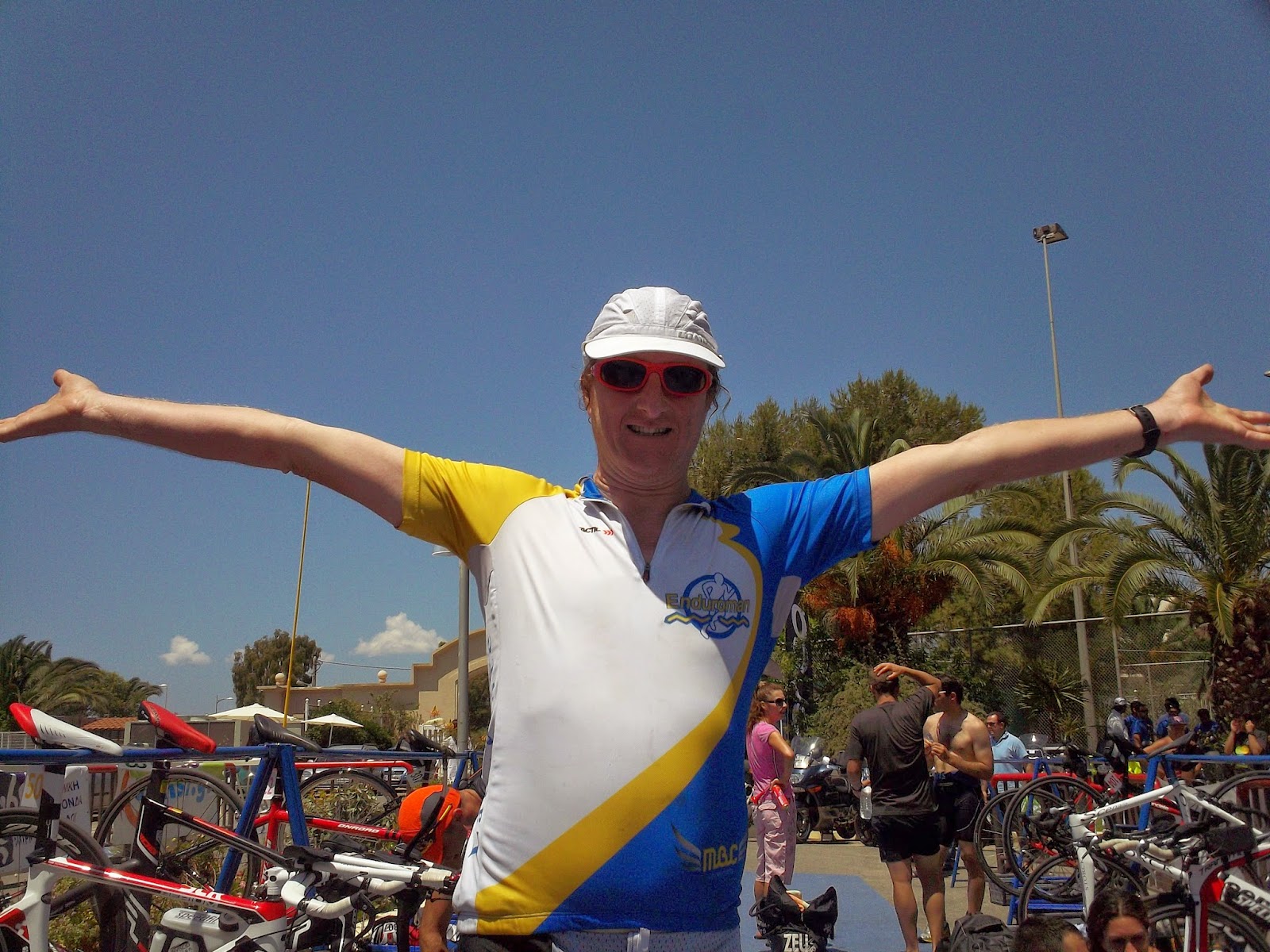