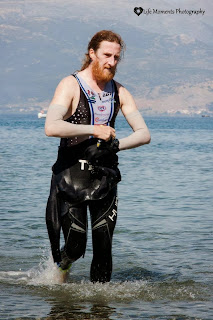 We watched the sprint distance race start at about 9:20.  They ran out through a shallow sea and swam 2 loops around some small red bouys.  As they started to come in and were out of our way we set off.  I think it was around 9:30, but had my watch set on the stop watch so wasn't sure of the exact start time.  Our swim was straight out from the beach. Past the little red bouy of the sprint course and on to a large yellow one.  Here we turned 90 degrees and swam about 50 meters to the next bouy.  Another 90 degrees turn and back towards the beach.  Unfortunately the bouy was a small red one and couldn't be seen.  I had figured out before the start it would be too small and couldn't find any thing on the shore to use as a marker, so had decided to head directly for the sun.  This brought me in to the bouy a little way off to the right, so some adjustment needed to be made and the turn taken. I swam the 50 meters across to the next turn, which went back on to the second loop.going up the long straight I felt some tapping on my feet so knew I was being drafted.  In the past this would of bothered me, but today it didn't. 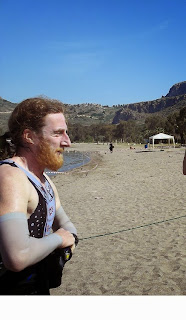 The sea was calm and the swim was a real pleasure.  On turning at the far bouy the drafter passed me and I got into his draft on his right hip. Then onto his feet after the last turn. This time I followed him and stayed to the left of the sun to come back in a straighter line.  I exited the sea and looked at my watch. 44 minutes. I was happy with this as it was my first swim since last September!  Nothing like training for an event. It was a short run across the road and into transition. I was somewhere near the last 1/3 to 1/4 out of the water so my bike was easy to locate.  I got my socks on and my bike shoes. On with my helmet and sun glasses.  I grabbed a chocolate chip cookie from my transition crate and ran out. 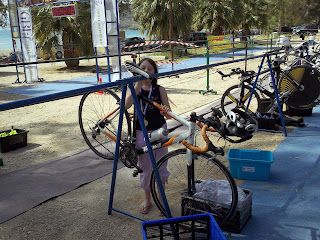 I had decided to do the bike blind so didn't have a computer to tell me my speed. I set off on the bike up to the first junction.  I passed one bike and saw 2 coming back.  Thinking this was the loop and I had gone the wrong way I turned around to see the bike I had passed still coming.  The 2 going the other way were from the sprint event. I turned back around, now happy this was the right way and continued on. A slow climb up a steep hill and then a fast descent down the other side.  At the next junction I was directed right.  At each junction were people with red flags pointing which way to go and on the major roads police stopping the traffic. 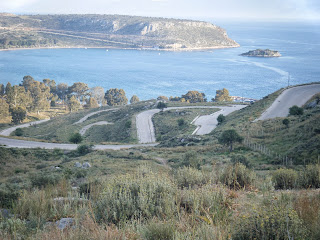 We rode out of Nafplio around 2 roundabouts and then through a village.  Outside the kafenions, in the sun sat many people drinking their coffee or ouzo and eating the pikilia's that come with the ouzo.  If this were France, I thought, they would be cheering us on as they do, but I don't think the locals knew what was going on.  The road then went over a level crossing and through a very pot holed section.  The bike I had chosen to ride was my road bike with aero bars on the front.  The aero bars make the front end heavy and along with the bumps the bars started to move down.  The next 4 times through this section I rode with my hands under the aerobars pulling them up to try and minimse the radical angle the bars had got into.  The last section was on some very smooth tarmac along the coast road, that ran back into Napflio. It had another level crossing on it that needed a bit of care negotiating. 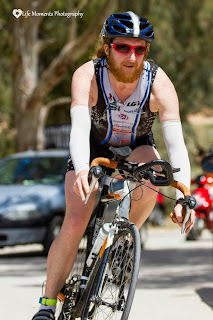 In the centre of the town the police did a great job of stopping the traffic to let us through at near top speed, although I had an hand on the brakes just in case!  Just before the end of the loop was the one aid station hidden away inbetween some parked cars. It had normal water bottles and not bike bottles. I didn't notice this until I had passed and I was planning to pick up a bottle next time around. A quick plan was formed.  I would have to ration the water in my bike bottle to last and get a drinking bottle each time around, using all the water to drink and put on my arms, neck and back to keep cool.  We were approaching 30 degrees.  I took small sips from my bike bottle only when thirsty and the water ever 25 minutes from the aid station was enough.  After 5 laps I grabbed the last bottle of water and readied myself for a very steep climb back over the hill to the beach. By the top of the hill my water was empty but it was 5 or 10 minutes and I would be back in transition.

I dismounted the bike and swapped my shoes for my road running trainers.  I put my legionaires cap on to protect my neck from the sun.  Grabbed a cookie and a bottle of now warm water I had in transition and ran out. 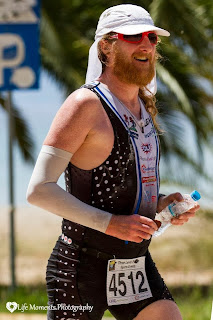 The run set off along the road we came in on on the bike but very soon turned off and followed the coast along a footpath that had been cut along the rocks.  It was a perfect surface for running.  It climbed up a little and I used my recent trail running experience to slow to a fast walk shuffle that conserved energy and kept the heart rate down.  Nearing the top I picked up speed again and rounded a bend.  Here I could see an aid station.  As there were people now running back I wondered if this was the turn point.  It seemed quick if it was.  When I got there I there Irealised the run continued on and this was the 2.5k aid station.  I took another bottle of water and continued onward with another steeper hill to climb.  Using the same technique as before, as fast as I could without raising the heartbeat.  I was doing this by feel.  I haven't used a heart rate monitor for a couple of years now. I held onto the water sipping it and tipping it on my arms to keep cool.  There was also a breeze coming off the sea helping, especially if I stayed wet.  At the 5km turn point I gave them my empty bottle and got a new one.  I ran back to transition, switching bottles at the 1/2 way mark again for a full one.  Coming out of transition a second time I noticed a water station I hadn't seen before.  This one and the one on the bike course both seemed shy to announce themselves.  I am used to seeing signs saying water 100 meters.  Anyway, one more out and back and I was done.  The first one had taken me around 46 minutes and I was still feeling good.  My core temperature was under control.  It was the first time I had tried arm warmers as coolers and it had worked a treat.  My last 2 races were in England in near sub zero temperatures and my training had all been UK based. I had no chance to train with a cooling stratergy going from UK temperatures to Greek ones and no time to aclimatise.  I managed a negative split and my final 10k was dne in 45 minutes giving me a finish time of 5:11:37. 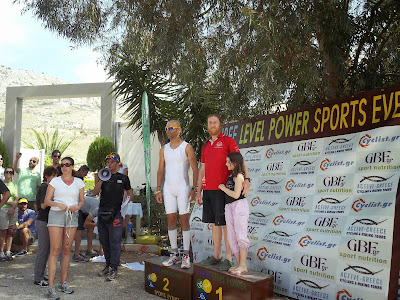 I took a few things away from this race.  My swim was 10 minutes slower than the people that finished around me.  So with more focus on swimming I have room to improve my time. I have a sub 5 in me.  My fueling stratergy was badly planned.  I was relying on aid station food and it didn't exist.  That said my training of running or cycling pre breakfast has certainly helped my body use fat for fuel or how else did I do this in the time I did with only 3 chocolate chip cookies?  My biggest thing though is the way I felt during the run and the negative split.  I feel like a runner at last! 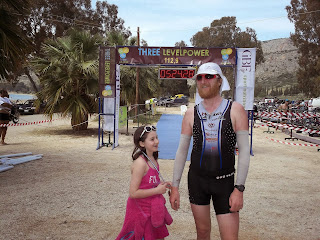 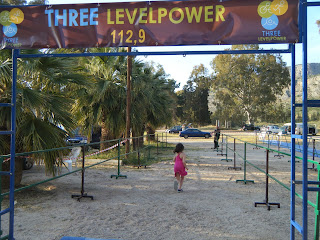