Well that chewed me up and spat me out!

The Olympian race is a 180km run from Ancient Nemea to Olympia, in Greece.  It is organised by Aethlios and run every other year.  They also run a 62km version every year which takes in the first 62km of the same route and finishes at checkpoint 7.  The 180km has a cut off time of 28 hours with 20 checkpoints.  It has 3 qualifying points for the UTMB and is a qualifier for the Spartathlon.  The reason I first wanted to run it. It is run on roads and forest fire tracks.  It’s not technical, but you are running over mountains!

After studying the course description and talking to some Greek friends I decided to use road shoes.  This turned out to be the right decision as the trail parts were hard track, although they were covered with loose stones.  I found the stoniest parts to be on the uphill anyway, which were where I was walking.

The race is very well organised and for overseas entrants there is a good package which includes hotels the night before and after the race, transport to the start and finish (or checkpoint you drop at).

The participation : “It includes the accommodation on Thursday 15 and Saturday 17 May, all meals, transfer from Athens/Nemea/ Olympia/Athens, C P supplies, medical care ,transfer of athletes who have abandoned to the Hotel at Olympia, prizes for the three first winners, medals for all finishers, diplomas with timing at four points of the race, souvenirs and traditional gifts. “

As I have a house in Athens I decided to do this on the cheap and registered for one of the Greek packages.  Retrospectively, this was a mistake as I missed out on a lot of the atmosphere and also had to get up at 7 am on race day to drive to the hotel for registration.  The registration for Greek athletes was from 9 am to 10 am and the race start was at 2:30 pm, another hour from the hotel. The overseas registration and briefing was at the hotel on the Thursday night, so the Friday morning would be a more relaxed time before the race. At registration you can place your drop bags, 3 plastic bags are provided in the registration bag, but there didn’t seem to be a limit on drop bags and they had big bin liners available for every check point, so you can choose where to put your things. I registered at 9 am and then hung around until the briefing at 11, chatting to friends and relaxing in the hotel. After the briefing was over we drove to Ancient Nemea, where the race was to start.  There are 4 ancient Stadiums in Greece where games used to take place and we were going to run from this one at Nemea to the biggest and most well-known one at Olympia. 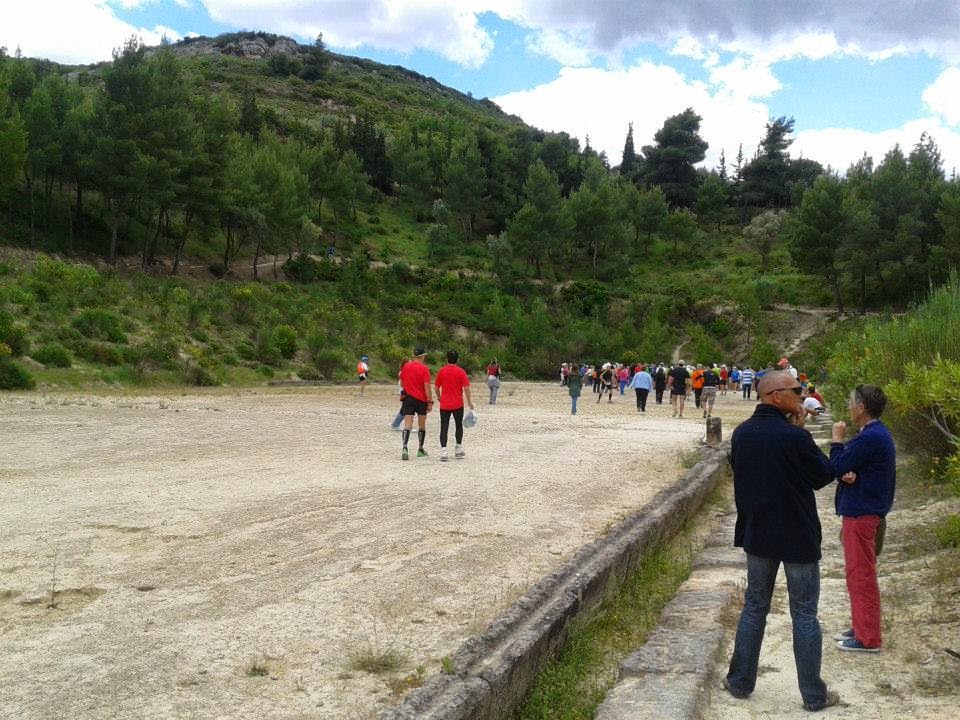 After a bit of a tour of the stadium and all the participants’ names being read out, both races started promptly at 2:30. The weather forecast was for showers and storms and right on cue the rain started as we started.  It was warm enough not to worry about a coat and getting wet. I had planned a gentle pace for the start and as the first 5.7km was slightly downhill,  I had wanted to get to the first checkpoint  at 3pm (it had a cut off of 3:10pm) As I ran towards it my wife drove past and shouted out the window “you’re near the front”  I took this as encouragement, but later learned it was meant to mean slow down you’re going  too fast. I arrived at the checkpoint exactly at 3. I was running with just a handheld water bottle and removed the lid as I closed in on the aid station.  I held it out to be filled, which it promptly was and screwed the lid on and ran off. 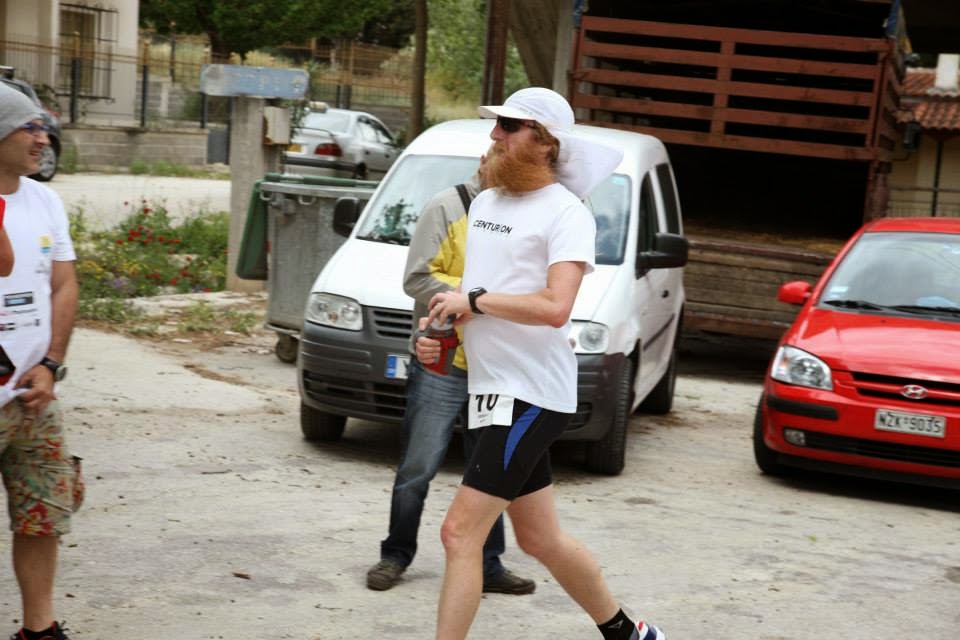 The checkpoint was just over 7km. I arrived here 5 minutes up on my schedule, but felt good and wasn’t worried about being 5 minutes up.  It wasn’t too bigger a gain. After this checkpoint the climbing began! 9km of walking up a twisting mountain road.  There wasn’t much opportunity to run. Somewhere along this section I met up with Frank. A Belgium runner who lived in Greece.  I knew off him as his was the only blog I found about this race when researching it.  We got chatting and it turned out he is coached by Robbie Britton.  It’s a small world!  At some point while we were running together an intermediate checkpoint was in place. There were a few in the race that weren’t advertised, some just took numbers and some also had water, coke and bananas’. The ones with water were generally up in the mountains between the long sections and were a joy to stumble across after hiking up long mountain trails. The guy at the checkpoint shouted out that we were in 14th and 15th place (this would of included the 63km runners as well)

At the next checkpoint I took a little longer than Frank and that was the last I saw of him. From the next checkpoint it was another long steep climb for about 7km I think this was all fire track. Then it was 8km down a road. Much of the next few check points went past walking up fire tracks and running down them or walking up roads carved into the side of the mountain with switch backs and running down some of those as well.  There were times when you came out of the woods to look across valleys and realise just how far you had climbed in a short space of time. There was another time where we ran down a trail and when we got to the road at the bottom the girl in front said to look behind and there was a magnificent rainbow arched over the mountain.  It rained heavily for an hour or more and I was glad I had my waterproof with me.  Many people didn't and must of got really cold as my hands got cold. 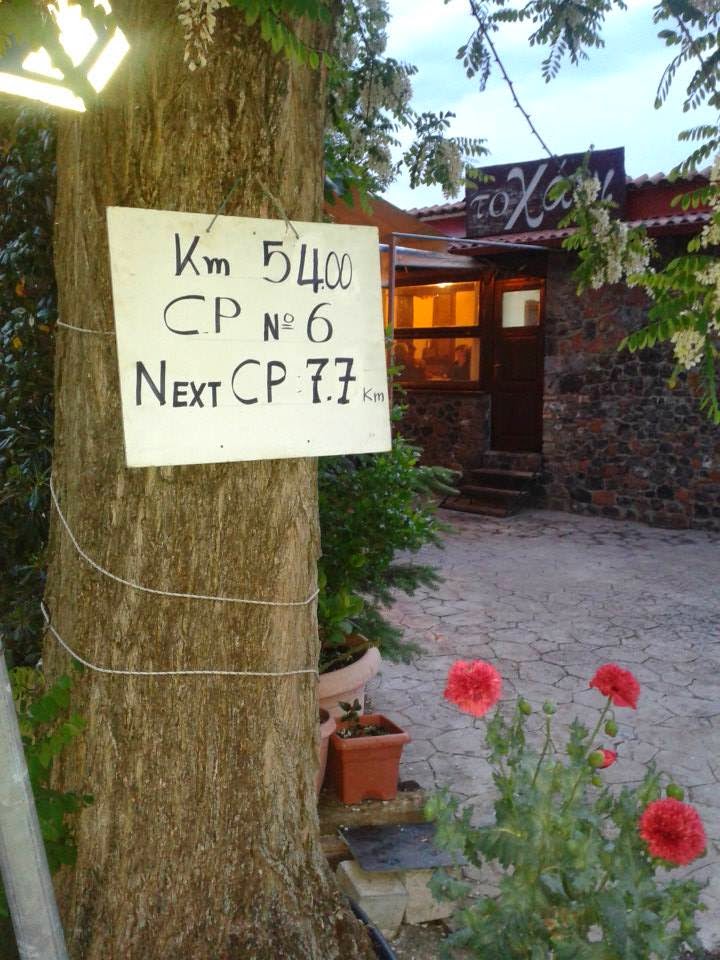 It took me 11 and a half hours to cover the first 50 miles. 6 weeks ago I ran 50 miles in 8 and a half hours on the South Downs Way, in sunshine in England.  I eventually reach checkpoint 7 in the dark.  My feet were wet and my t-shirt sweaty.  My wife was waiting for me, as she was at every checkpoint. This time with fresh clothes and dry socks.  I had forgot to bring a towel. Well not forgot. I didn’t think I would need one. I put talc on my feet to get them dry. I lined the insides of my shoes with talc to get them dry and I put on a base layer, a dry t-shirt a long sleeved technical shirt and took my waterproof with me.  My schedule was now 30 minutes behind 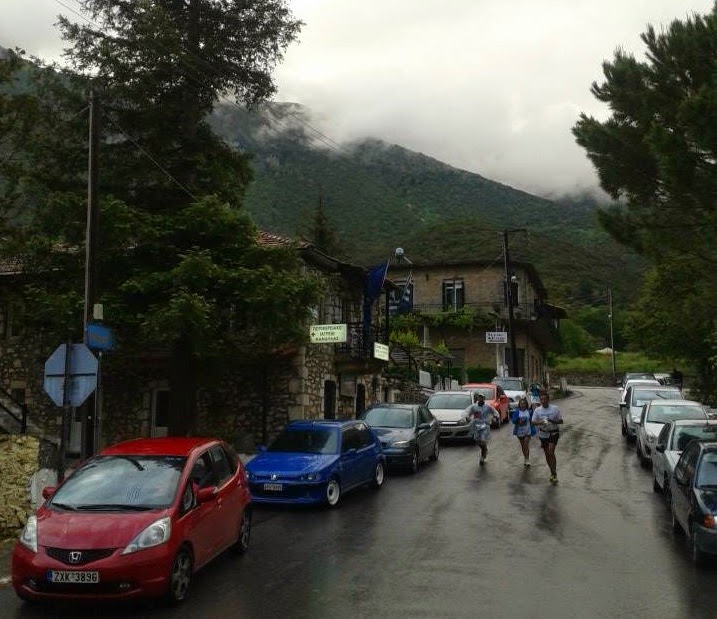 The next section was 22km and it was going to go up into the mountains to the highest point in the race.  I ate some pasta and set off alone into the dark.  A lot of this section was off road and the organisers drove past a couple of times in their trucks, checking the athletes were ok. I was only just warm enough and at one point contemplated getting my space blanket out of the backpack!  I spent the first 8 or 9 km alone then the rest of, this section chatting to a Swiss guy and leap frogging a group of 3 Greeks, who had all caught me up at an unpublished checkpoint that had water, coke and bananas’.  It was an amazing boost when I happened across it and it was here the trail also turned down and I was able to start running again. 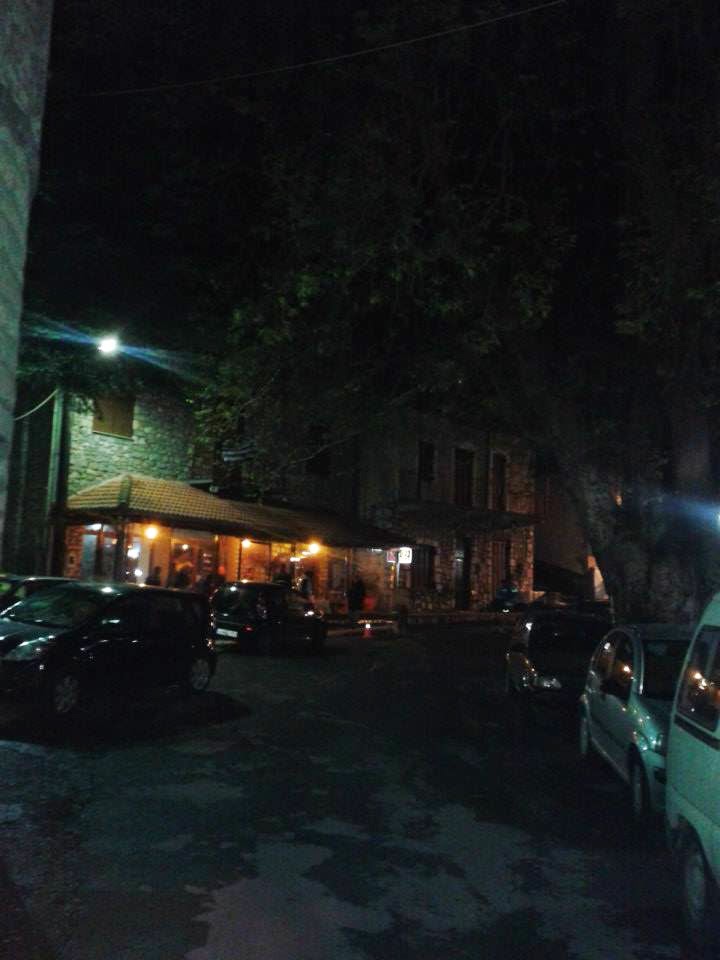 Checkpoint 9
I was due to arrive at Vytina at Midnight, but had lost another 1 and a ½ hours in the last 22km.  I wasn’t to worried about this as it was a tough section and before I started the race I didn’t know how I was going to fair in the mountains.  So I arrived at 2am still feeling pretty good and looking forward to having a successful finish in 26 hours instead of the 24 I had scheduled. From Vytina to Magouliana was 12km of up hill and I had allowed 2 hours for this section. It took 2 hours, but by now my calves were permanently cramped and I had to shuffle to move uphill.  My parting words from Magouliana to my wife were “ I don’t think I can do this”. 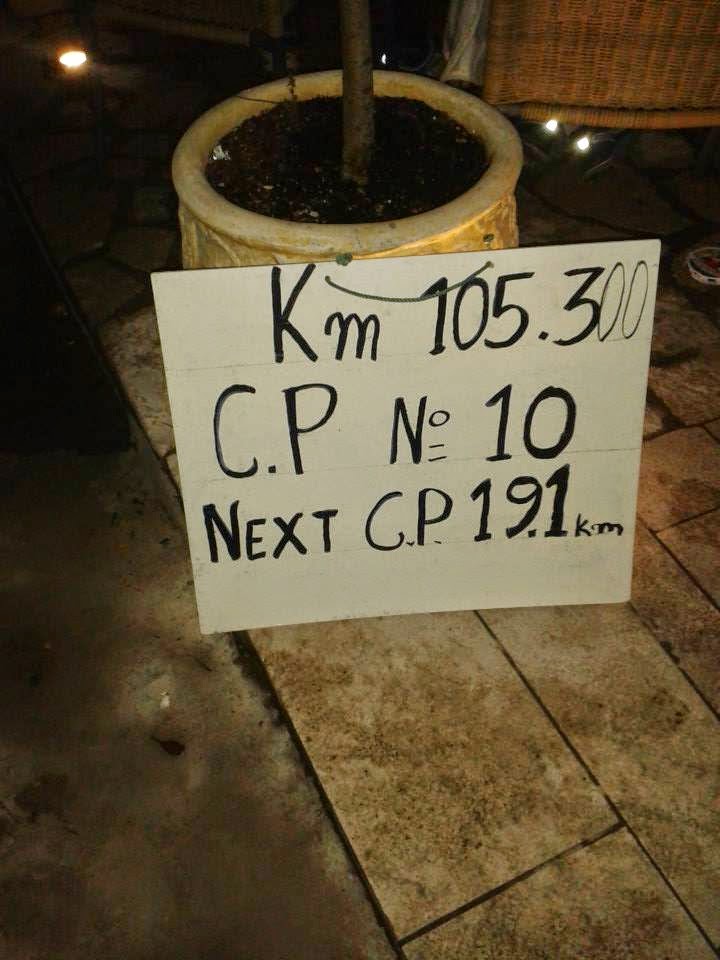 The next section was scheduled for 1 and ½ hours and took me 2. I was slowing and I knew it. I did the calculations and realised I could still make it to the end with maybe 50 minutes to spare.  This would mean no more slowing down though! I had no injuries, just aching and cramping calves. I was hoping the sun would come up and I would get sorted out. I arrived at the check point  at 5:43 am.  The sun still hadn’t come up and I was miserable.  I was struggling to get my head around death marching 75km.  I couldn’t even run down hills at this point. I wanted to run, this was a running race not a walking race. Without much more thought I cuddled my wife and said I am finished.  I handed my numbers and timing chip to the checkpoint crew and signed a form to say I would make my own way and didn’t need the transportation to the hotel that they provided.  I ate a yogurt, had a tea and we left.

It is Sunday night now and I am on the plane back to the UK. I can walk ok, I even sort of ran up a hill to the car.  I feel I cheated myself out of a finish as I feel ok now, but realistically I would have been fighting cut offs and I don’t just want to finish a race anymore.  I want to finish them well.  So I live to fight another day and the race will be there in 2016, when I can try it again with better knowledge and give it the respect it deserves. 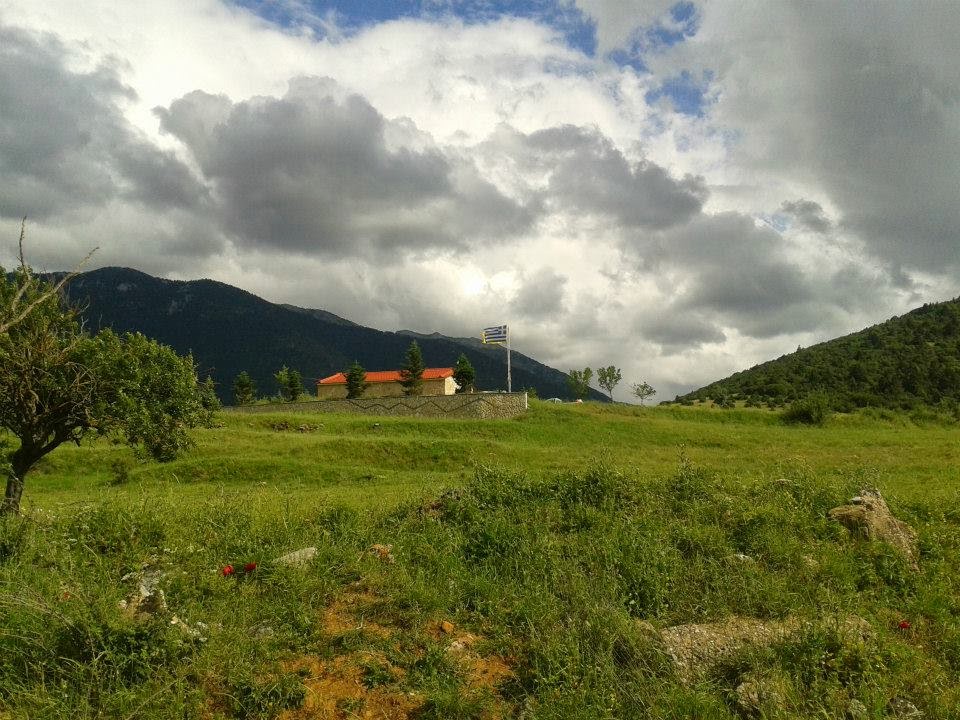 It was my first mountain race and boy they are different to the rolling hills of the English country side.  I am going to start running up and down hills now for a year!
I would highly recommend this race. The organisation is fantastic and there is something magical about running in Greece.  If you do decide to try it, beware, just because it’s Greece don’t think it doesn't rain and doesn't get cold at night.  You need base layers and waterproofs as well as sun cream and legionnaires hats.


I want to give special thanks to my wife, Maria, who spent her birthday driving around mountains to make sure I was warm, dry, fed and watered.