I was aiming to complete the Big Woody, but 2 weeks previously had pulled out of a 100 mile race at mile75 with a sharp pain in my foot.  I hadn’t run for the 2 weeks in between and the pain had rescinded when I was walking. I emailed the organisers and asked when I needed to let them know by that I wanted to change races.  Registration was fine.  So I left the decision to the last minute, but realistically it was always going to be the Little Woody and not the Big.
The Big Woody is run on a course of 3800m Swim, 106 mile Bike, Run 22 miles. The Little Woody is: 1900m Swim, Bike 56 miles and an 11 mile Run.  It turned out the swim had some free metres and was more like 2400 meters, but with the location that really didn’t matter.  It is in the national dive centre and has beautiful blue water with towering walls all around it. 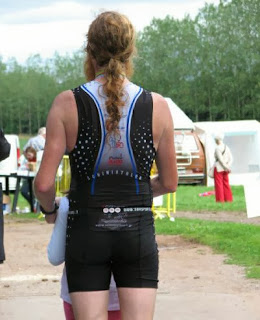 My family were in England on holiday, so for once I was driven to the race.  I normally use a combination of public transport and cycling.  We arrived on the Friday and set up the tent in the free camping area.  This was by the bike to run transition and finish area, which creates a great atmosphere.

The race was, unusually a Saturday race.  We woke up early Saturday and drove the 2 miles to the start at the dive centre.  Here the bike racking was a free for all. Pick a spot and rack the bike. Then it was a short walk down a steep path to the water.  We had the race brief and waited for a gap in the Big Woody swimmers so we could start. 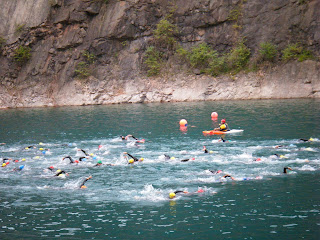 The swim was 2 laps for the Little Woody. Two long laps… I really enjoyed the swim, with the clear water and no navigation needed as we followed the lake walls and a small amount of participants.  I only had one moment when I was pinched between 2 other swimmers.  As I excited the water I removed my wet suit and left it with my wife.  I put on my trainers that we had been advised to take to the swim exit and ran up the steep slope to the transition. 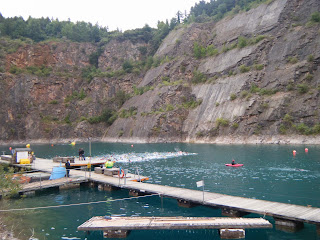 Once out on the bike we had a small ride to the start of the one massive loop we were to ride (the Big Woody is 2 laps).  The ride is well marked and good warnings of sharp turns.  I couldn’t get lost if I tried.  At one point the ride diverts off the road and through a school yard where an aid station is based.  There are some steep climbs and fast descents.  At one point I remember smiling as I came down a fast descent to be faced with a wall of road going up again.  Within no time at all all the downhill speed was gone and you had to grind your way back up. Following parts of the Wye valley and Forest of Dean, the course is a very picturesque one. Coming around one corner there are small rocky walls rising about 2 meters.  Wedged between these walls and the road edge are sheep lounging. I took it slowly through here as I didn’t want to get knocked off by a sheep, but I don’t think they moved at all.  I guess they are used to it. 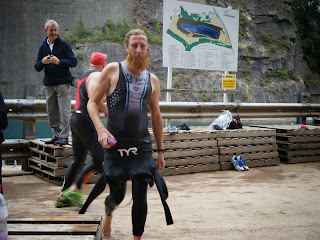 The run is an out and back.  This was to be run 3 times for the Little Woody.  I dropped 400mg of Ibuprofen at the bike to run transition.  Hopefully this would get me through the run without too much pain. Each lap consisted of a flat run along a track and a small amount of tarmac which turned up a hill and turned into a stony track.  Then there was a short sharp downhill where an aid station was based, with awesome flapjacks and then back up hill to the turn point.  My foot hurt a little on the first downhill and although I kept running I took it easy.  The second lap and my foot felt a lot better, but knowing I still had a little way to go I kept it going easy.

Each time I came back to the finish area my wife was waiting and it was great to be cheered on.  The last lap I felt great so I decided to speed up a little.  When I got back to near the finish my wife had gone.  I ran through the finish and picked up my finishers medal Then I walked around to where I last saw my wife.  She was back with my daughter looking up the track to see where I was, so I sneaked up behind them.  They hadn’t expected me to finish yet.  So that’s what a negative split does. 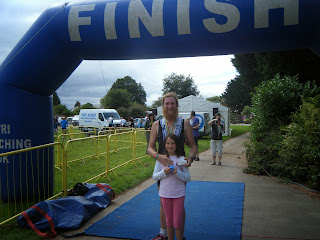 This is a great race with a great atmosphere and a small participation. It has one of the best swim venues I have swam in. A lumpy, tough and picturesque bike course and a fun out and back multi lap run. There is plenty of support due to the layout of the venue and free camping and loads to do for kids in the craft centre.