A short report on the South Downs Way 100. It's hard to remember what happened over a 24 hour period of no sleep and constant activity. 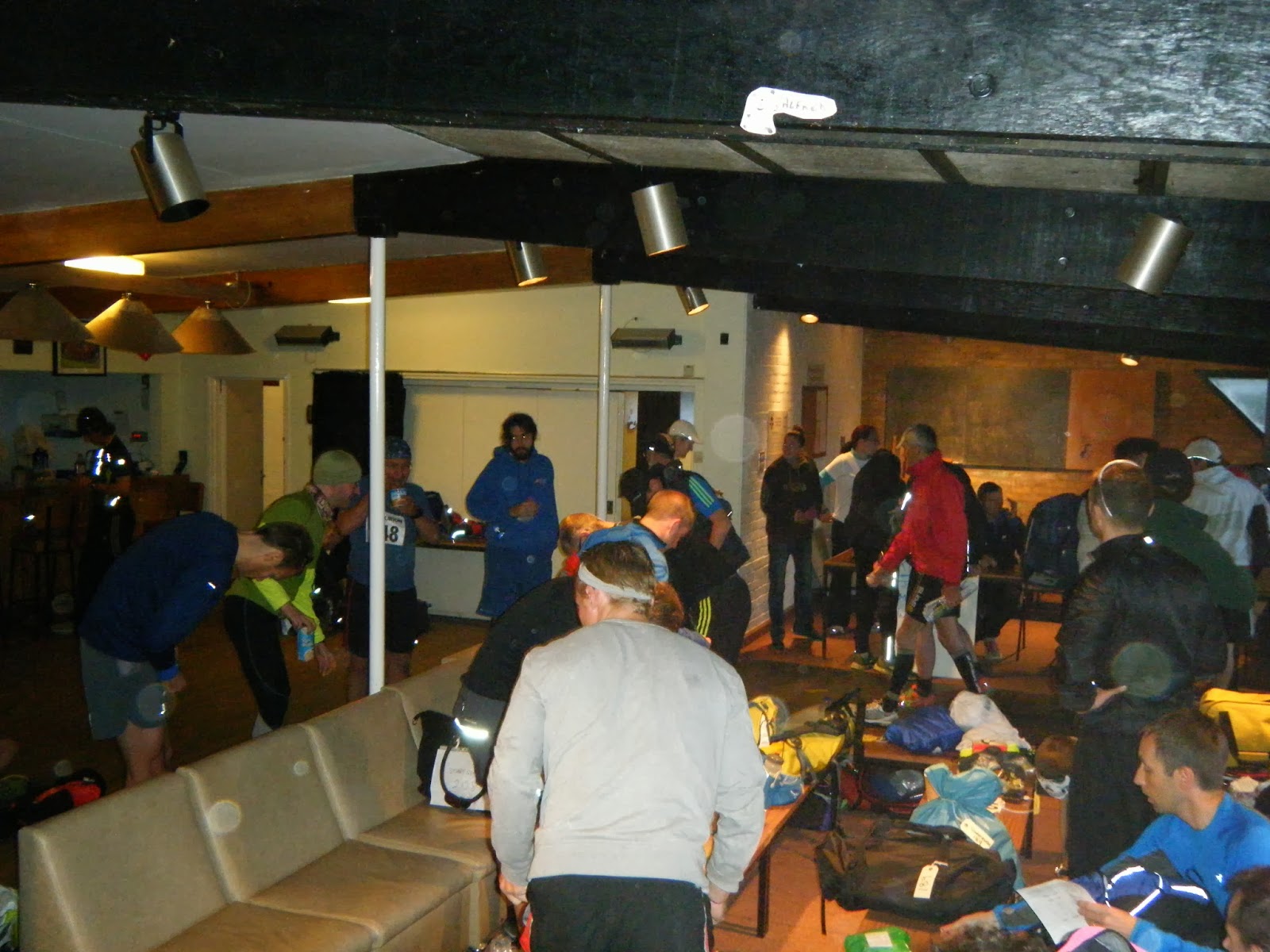 I cycled to work on Friday and left my bike there.  I then planned to get a lift in Monday and cycle home. I left work at 5 pm and went to the station to get a train to Winchester. Once I got to Winchester I decided to walk to the hotel stopping at the start on the way. After asking a couple of people I managed to get myself to Chilcomb. I couldn't locate the sports ground though and as it was getting late decided food was the most important thing, so I went on to the hotel.  I just missed the restaurant so had to settle for a bar snack which I chose mixed grill vegetables served in a roll with a few crisps.  Now there were no shops in the area either so I couldn't stock up on breakfast goodies. Back at my room at about 10pm I checked out the mini bar to find the water and a mars bar within it were complimentary.  That was going to be my breakfast.  I checked out my etrex satnav and realised i was one more corner away from the start when I had turned around.  A restless night ensued, partly thinking about the start and dreams of missing it. 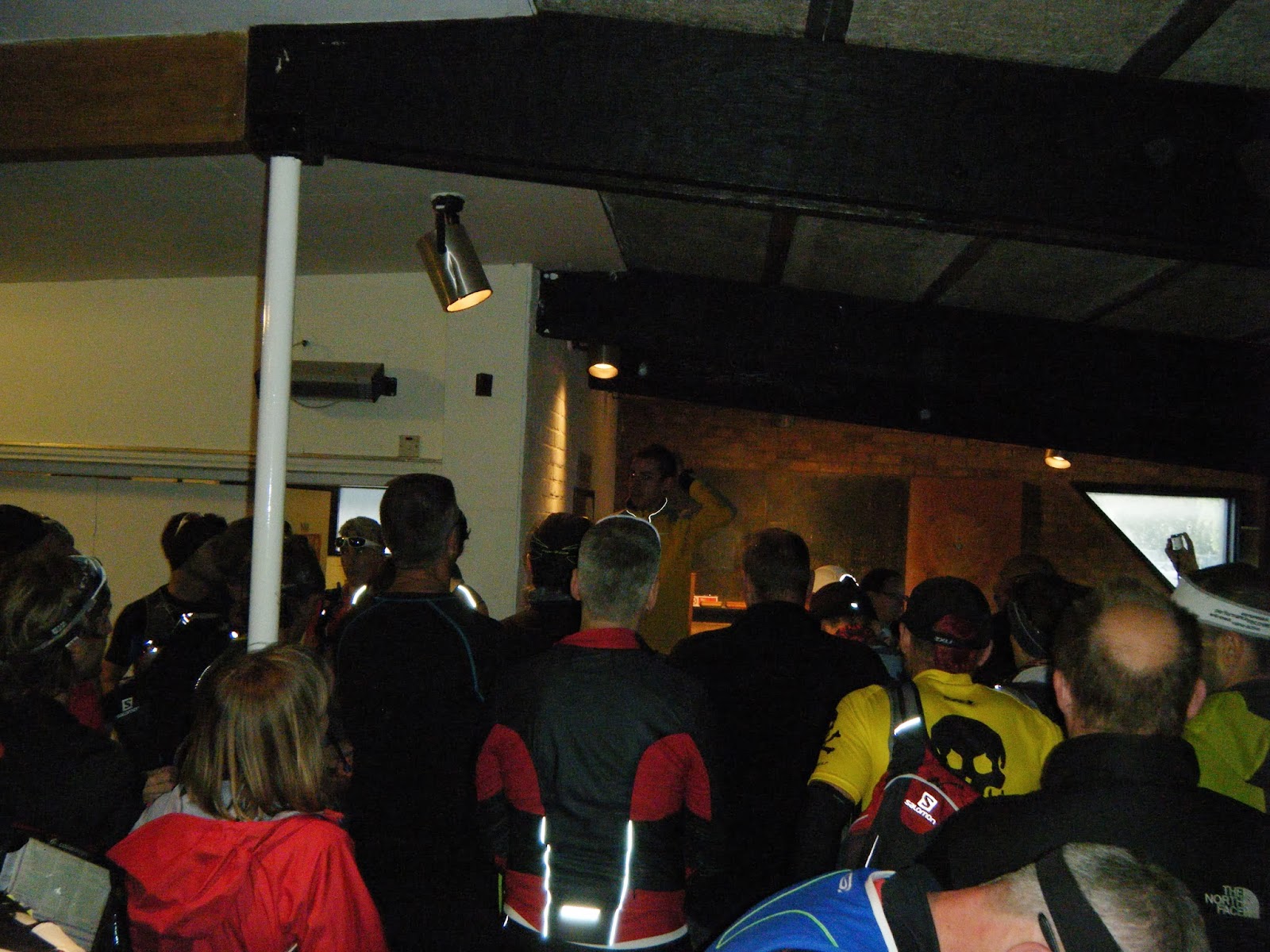 I woke up just before my alarm which is usual on race days, ate my mars bar got dressed and left.  At reception someone offered a taxi ride as they had room for a couple more.  so I jumped at the chance.  The start was exactly where my sat nav said it was and we were soon there.

I got registered. had my kit checked and got my number, which I pinned to my shorts. I met a few twitter friends, had a chat with some new friends and relaxed in a chair while I waited for the briefing and then the start.  The briefing was brief,  just to point out a few place to watch out for and at 6am we were set on our way.  2 laps around the sports ground and then a queue to get through a gap in the hedge and onto the South Downs Way.  The short queue didn't matter. What’s 30 seconds when you have 100 miles to run?

I had a pacing plan written down, although no way of telling if i was on target until I hit the check points.  so it was run slow and if that felt good run a little slower.  About 5 miles in I was ascending the second hillock when I realised I had forgot to turn my etrex garmin on.  I was walking, as it was a hill so I removed my backpack opened it and found the garmin.  I switched it on and put it back into my pack. I arrived at the first aid station at exactly 7:40 am and exactly as my 24 hour pacing plan had said I should.  I had my handheld water bottle filled.  I was using a 1/2 litre handheld bottle and had 1.5 litres in a reservoir in my backpack for reserves. I grabbed a few biscuits and jelly babies and walked off eating them. 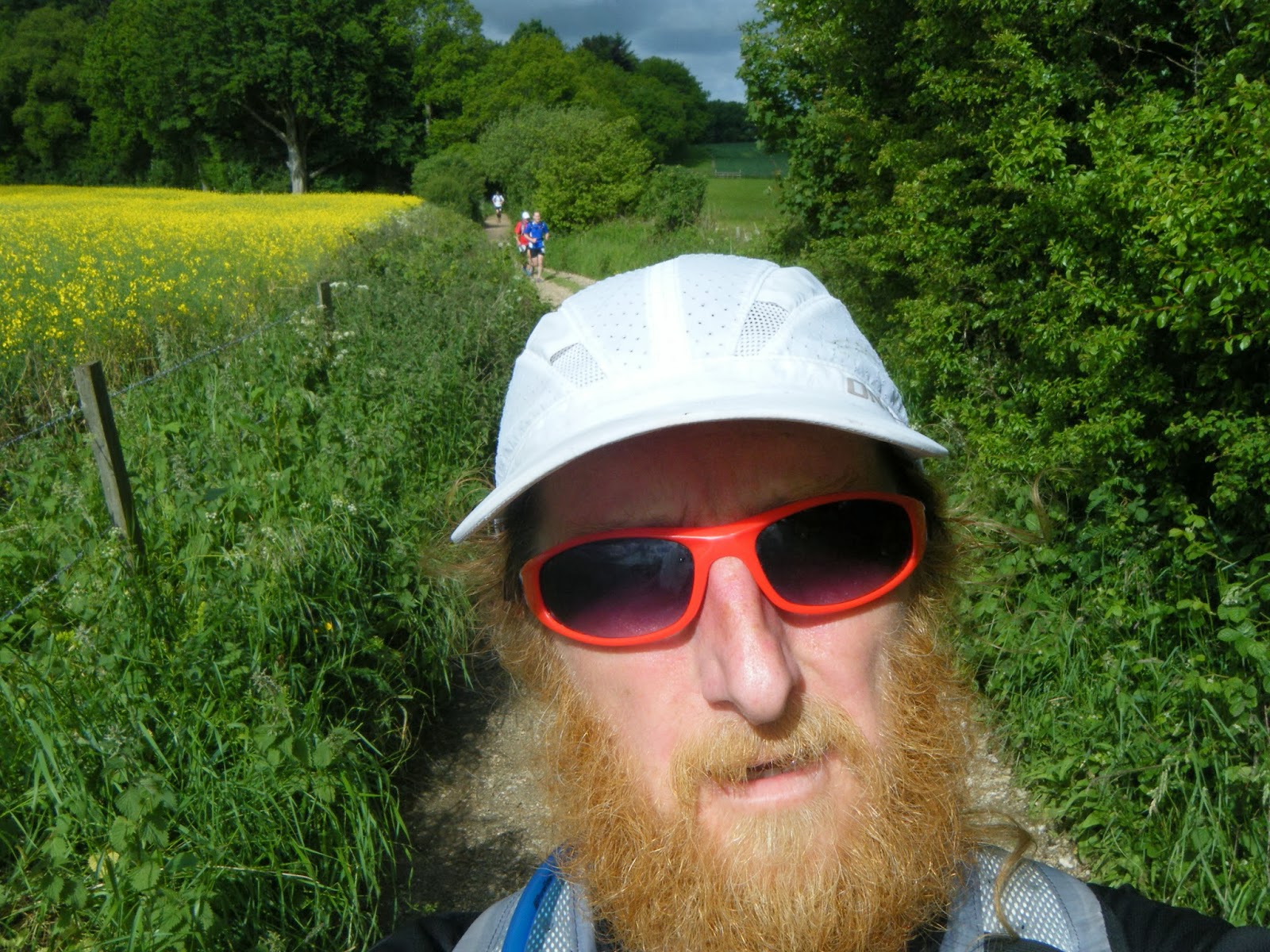 At around mile 21 there was a large steep grass downhill.  I had been playing pass with a couple of other guys in the last segment.  Here they flew past me as I tried to control my downhill running. I arrived at the second aid station (22.6 miles) at 9:53, 5 minutes up on my pacing plan and feeling really good. Chris Ette, was helping out here and said I was looking good.  I went through the same procedure. A handful of peanuts for the salt and fat straight into my mouth, followed by some watermelon, while a volunteer filled my bottle.  Then I walked off eating biscuits and jelly babies.  The food at all the aid stations was fantastic. It was especially nice to see so much fruit, from orange, and bananas to water melon, melon and even cherries at one aid station.

I caught up with Ant,Gary and another guy (sorry I didn't get your name) again and ran with them chatting or in silence. Sometimes being dropped and other times running ahead.  This went on for the next 27 miles.  All running our own races, but frequently passing and having the occasional chat.  At some point I heard Gary mention he was going to quit at mile 54.  We had previously met on the NDW50 a few weeks earlier where our pace was similar again. 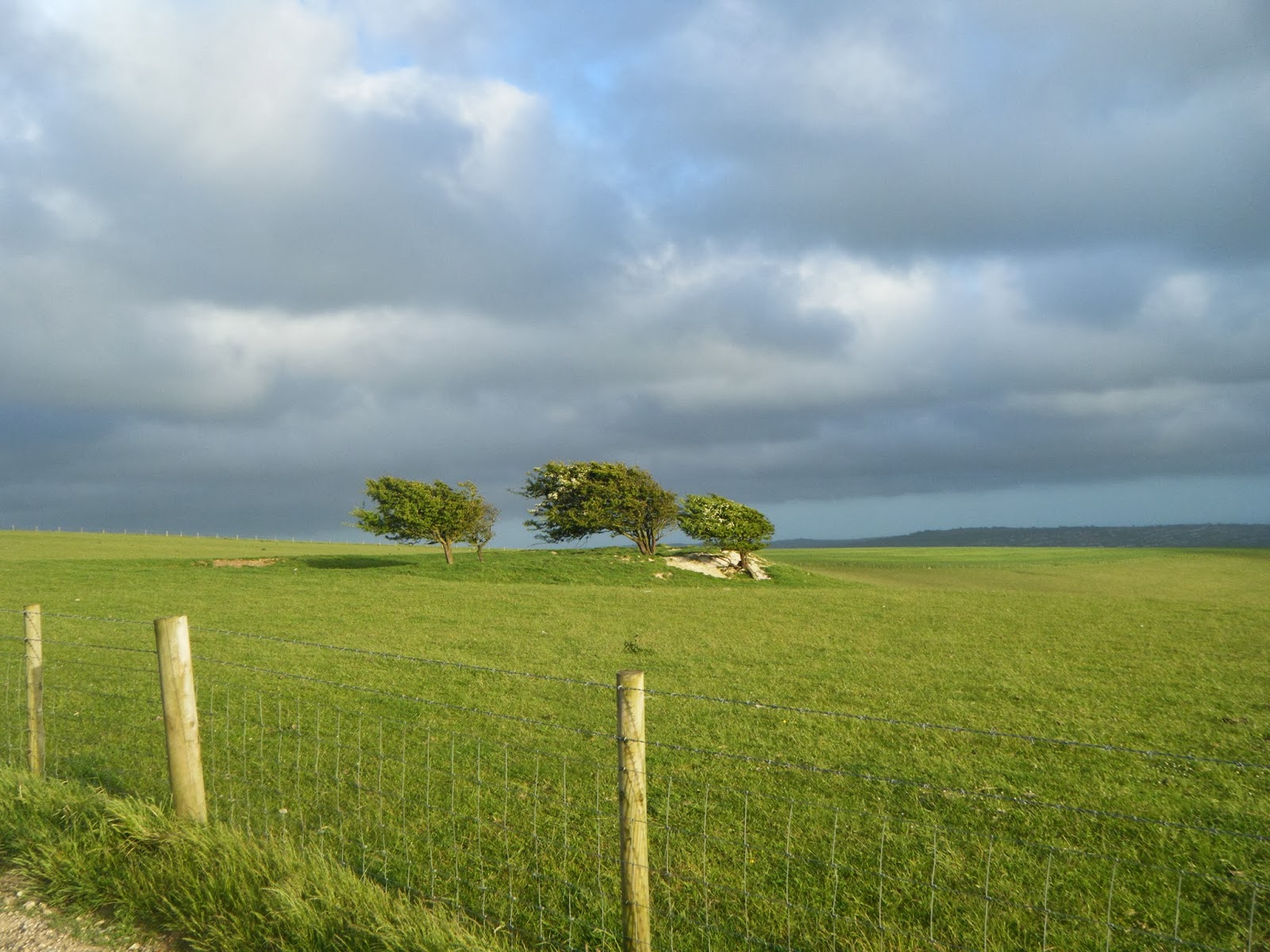 Kithurst Hill, mile 50 came and went.  It was just a tent in a car park and with Washington only 4 miles on with hot food and indoors. I didn't want to hang around at the real 1/2 way point.  I had mentally made mile 54 my 1/2 way point because of it's services.  This, on hindsight was a good thing to do as it meant the 2nd half was only 46 miles. I arrived at Washington at 16:15, 10 hours 15 minutes into the race.  I was feeling really good.  I got some pasta, a cup of black tea and sat down for a rest.  I changed my t-shirt. I was carrying a spare for this.  I handn’t took advantage of the drop bags as I didn't know when I would need my tshirt, lights or extra top(s) and didn't want to not have them and get cold or caught out in the dark.  I think I took about 10 minutes and decided to head on out.  In that 10 minutes I had stiffened up so I walked a bit to loosen up again and was running again after about 5 minutes.

The next aid station was in a layby at Boltolps (61 miles). The food was awesome.  All laid out and labeled; vegetarian cake, vegan wraps.  I took 2 vegan wraps and 2 pieces of vegetarian cake.  I knew there was a big climb coming up from running the SDW50 a couple of months earlier, so I would have plenty of time to eat them.  I was helped across a very busy road and started the long climb up.  The vegan wraps were most amazing, it really was my sort of food.  Thank you so much to whoever made them.

The next aid station was Saddlescombe farm at mile 66.6 and here I topped up my reservoir as well as my water bottle.  They also had some great looking cakes, and I felt guilty for not feeling like eating them.  I was back on a biscuit only diet.  I love biscuits. they are probably my biggest food weakness and being able to eat them for 24 hours without feeling guilty is a good reason to run for me.

It was only 3 miles from Saddlescombe farm to Clayton Windmills.  But it was a big tease. you could see the windmills from a good 2 miles away and there was a big drop then climb between you and the windmills.  I was a good hour up on my pacing plan and I was still running. At this point in the TP100 my run was as fast as my walk so I had sucumbed to the death march to the end.  Not this time.  I was feeling great. 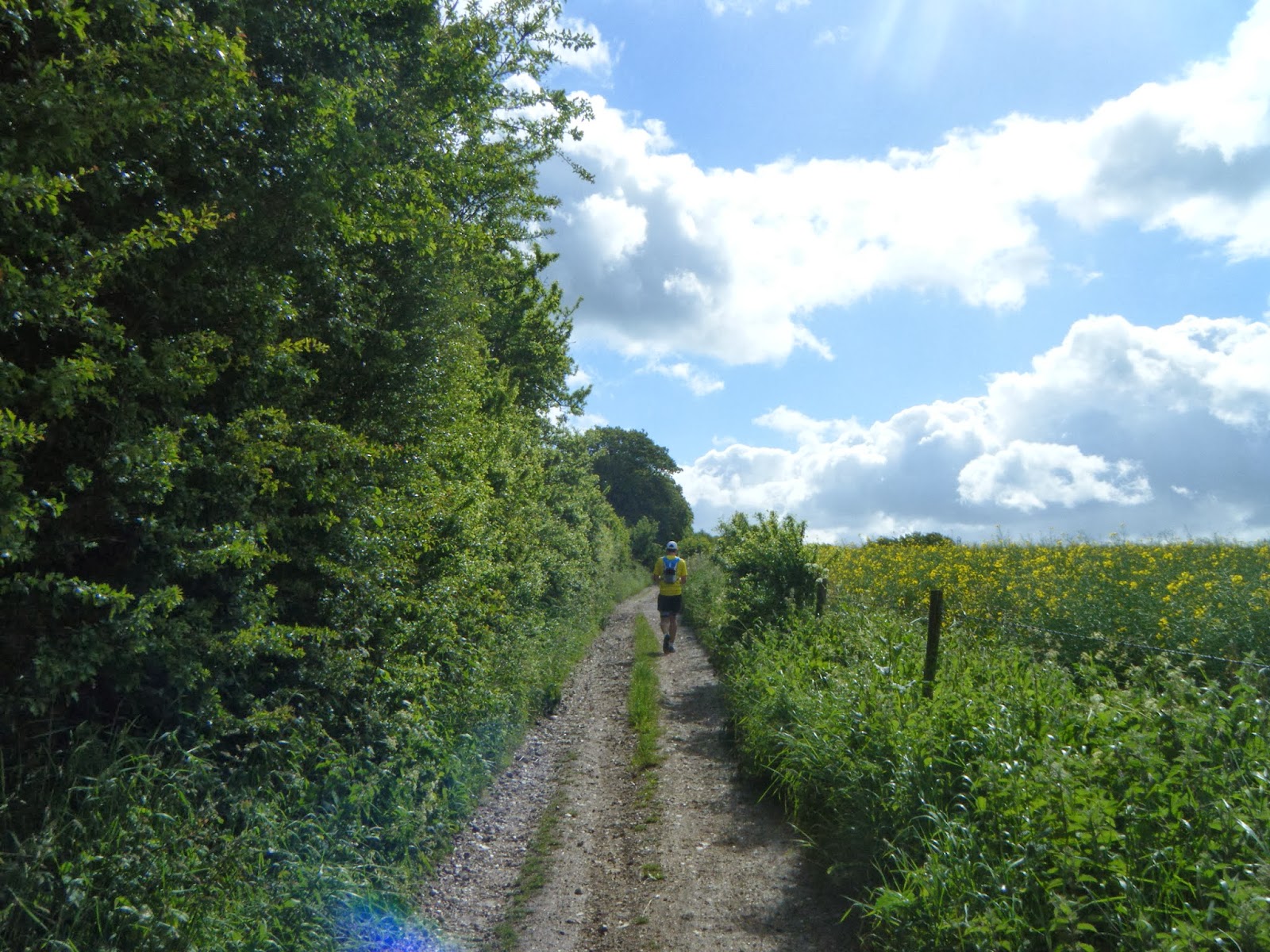 Through Clayton Windmills without wasting time.  Water bottle filled and 4 biscuits from the back of the van and I was onward. At Housedean (76.6 miles) Gary caught me up and we put on our torches and left together.  I was glad he hadn't quit.  He took 25 minutes at Washington and then continued.  I also hadn't seen Ant since before Washington either and I wouldn't see him until the finish.  It always good to see others finish as well as finishing yourself. Gary took off and we passed each other a few times.  Then as it got really dark he waited for me at a gate and we ran the rest of the race together.  He explained he wanted to navigate the night together after getting lost last year. He was obviously faster than me and had to keep waiting, but explained 2 or 3 minutes waiting was better than 2 and 1/2 hours being lost. I felt guilty that i was holding him up and tried to get him to run on, but he was having none of it, which meant I had to keep running. It was great to run with someone faster than me as it meant I pushed myself more than I would have had I been alone.  Thanks Gary.

We arrived at Southese (83.3 miles) at 22:41 (16:41 into the race) where Niki had some cakes waiting for me pre ordered via twitter..  I still couldn't face cake and asked her to take them to the finish as I would have a sleep when I got there and would see her when I woke up.  I was now 2 and 1/2 hours up on my 24 hour pacing plan and still running.  As we left Southese my wife called and I told her I only had 17 miles to go and would be there at 3 am.

At around midnight, somewhere on the Downs we came across a group of kids.  16 maybe 17 years old.  What were they doing?  then another group and another.  we came across 4 all together.  One group even made a finish chute type of path for us to run through.  I'm sure it was real and not a hallucination as other race reports have them in there, but it was a little surreal.

With Gary basically pacing me we ran through the last 2 aid stations. Avocado at Alfriston! and then I left Gary at Jevington for him to catch me up on the climb, which he did just before the trig point where we turned down into Eastbourne.  It was all downhill now.  We ran into Eastbourne around the track together and crossed the finish line in 20 hours and 26 minutes. Over 7 hours faster than my previous 100 miler! and well within my 24 hour target.  We were then offered tea and hotdogs (veggie ones too) by Marvelous Mimi Anderson.  You have to love the ultra community, where else can you be served tea by a world record holder?

Congratulations to all finishers and a special thank you to all the volunteers.