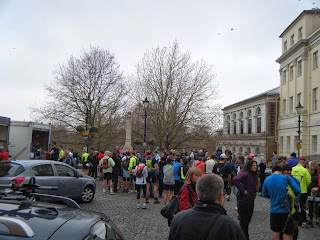 At 10 AM exactly the race started outside Richmond town hall, alongside the river Thames. The forecast was for a showery Saturday followed by a cold night and then a wet Sunday.  Right on cue as the race started the first shower also began. 180 intrepid runners set of down the Thames path towards Oxford. My plan was to run for 25 minutes and walk for 5.  I had practised this in training as well as some other run/walk splits and this felt the best.  It was also easy to work out as each cycle of 2 started on the exact hour each time.  Knowing what ultra's do to your mental capacity in being able to do the simplest tasks it was important to keep things simple.  I started of near the back as I wanted the group to help keep me slow and I didn't want to go off too fast with the adrenaline rush you always get at the start of a race.  This worked well and at the first gate there was a little pause as we all tried to file through.


The track is mostly tarmac at the start of the race.  However, there was one bit I remember from a recognisance run that was very muddy. This was just through that first gate.  It turned out not to be muddy this time and was a good sign of what was to come.  The lack of rain over the winter and preceding week meant that the potentially muddy parts were not so.  The first 25 minutes went very quickly and I was soon on my first 5 minute walking break. The first aid station was 12 miles from the start and had a cut off time off 3 hours.  I had a plan to arrive there at around 12:50 which was slow and also worryingly close to the cut off, but it was how I wanted to pace my first 100 miler. After 4 cycles of 25/5, 2 hours, I was starting to wonder where the first aid station was.  Had I really managed to run so slow?  Had I somehow missed it?  Would I make it in time?  Even though I had a plan I never expected to be able to run so slow at the start.  I was thinking about how fast I ran a 1/2 marathon and how much longer this was taking etc.  At 12:15 I rounded a little bend in the path and there it was Aid Station 1 proudly announcing itself on a board.  A couple of gazebos and some tables with biscuits on.  The very thing I had been craving for the last 30 minutes.  I had on a front pouch on which attaches to my rucksack.  I opened this and put some biscuits in.  For some reason I didn't want to look greedy and didn't really take enough. I left the station walking and scoffing down biscuits.  We went up some steps along a bridge and across a road.  Waiting for a short time for the pedestrian lights.  So at aid station 1 I was already 45 minutes up on my plan.  I couldn't work out if this was a good or bad thing. 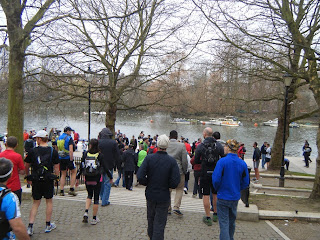 The next aid station was 10 miles away at Wraysbury.  At one point I was happily following two runners in front when they realised they had gone the wrong way.  A power walker behind me also followed.  As I was on a walk break she powered past me.  I decided to have a little chat so ran to catch her up.  I tried to walk alongside her but couldn’t keep up, so ended up running while she walked. Once we realised we had gone the wrong way we turned around and headed back.  The power walker went off in front and that’s the last I saw of her.  I then noticed the sign pointing up to a car park and recalled it from my recognisance as one to remember.  Up the steps by the car park and over the bridge.  It was here I caught up with Martin.  A friend from my tri club.  We had met on the train going up and travelled together.  We ran/walked together to the next aid station keeping the 25/5 going.  I left him here as he needed to attend to some blisters.  I was still around 45 minutes up on my planned time.  So with the little detour I was almost on my correct pace now.  This time I stocked up with enough biscuits and little pieces of mars bars and also took 2 bananas.
Aid station 3 was 6 miles on at Windsor.  It was on this leg I met my new friend Blades.  We kept passing each other on our run walk strategies and as he went past he asked if I was ok.  I then caught him up and struck up a conversation. We stayed together until mile 58 at aid station 7 at Reading.  It was great to have someone to talk to and especially good through part of the night. I was now about an hour up on my time.  I did have some hot spots and blisters on my feet but I was able to ignore them and thought a plaster would just get moved around in my sock and possibly make them worse.  So I left them as they were. Leaving the aid station I took some biscuits, mars bar pieces and a sausage roll.

I remembered the sausage roll as I was digging through my food pouch and ate it.  It was horrible.  Not because the sausage roll was horrible, but because I had forgot I was a vegetarian in my haste to find something to eat and it made me feel sick as I wasn’t used to eating meat. Darkness started to fall as we approached aid station 4.  This was the first aid station with hot food.  The hot food was chicken soup.  I asked for a vegetarian option, but they had run out of tomato.  So a cup of tea it was for me.  It was getting cold as the sun was dropping so I put on another long armed cycling jersey I was carrying with me. We left with our head torches on and very soon needed them. The day had turned out nice and after the intial shower at the start had been sunny all the way. 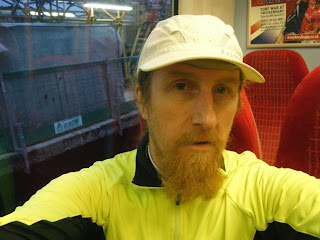 On the way to Aid station 5, the 44 mile point we kept crossing paths with another runner. We started to chat a bit and Mat became another new friend. At Marlow about 7 of us who had been running closely together took a wrong turn and went over the bridge.  We soon noticed our mistake and got back on the right side of the Thames and carried on to the aid station. A quick refill of water, biscuits and mars bar pieces and we were on our way again.

We were now heading towards the ½ way aid station at Henley.  Blades was meeting Bob here who was going to run the last 50 with him.  On arrival the aid station was very busy.  I was able to get some baked beans to eat.  The only vegetarian hot food on the whole course.  I was expecting pasta somewhere, but it didn’t happen.  I think if I attempt this again I will use a crew and have food ready I know works for me. I was now 1 hour up on my planned time and 3 hours up on the cut off time.  It was looking very good.
The 25/5 strategy turned into a 5/5 strategy as we  all tired and started to get aches and pains and the 7 miles to Reading took us a while.  Once we arrived at Reading Blades sat down.  I asked him if it was a quick stop or if he wanted longer.  He said it was just a quick stop, so I went and filled my food pouch up and went back.  He was not looking good.  I felt him and he felt cold, even though he was well dressed.  Bob said he would sort him out and so Mat and I left on our own.

It wasn’t only Blades that was feeling it.  My legs were aching like mad now and my hips hurt with every move.  We took the decision to walk the whole 9 miles to Whitchurch.  We were well ahead of cut offs and thought a good rest may get us running again.  We kept up a pace of almost 15 minute miles and took 2 hours 20 to get to Whitchurch.  We also decide we were going to take a 15 minute rest.  This was the first indoor aid station and would have a plumbed in toilet. When we arrived I saw Martin sat there.  I couldn’t work out when he passed us, so asked.  He had got a lift in as his blisters had got so bad he couldn’t continue.  He gave me some anti inflammatories and some pain killers. As we went to leave 20 minutes later Blades and Bob turned up.  I was really happy he was going again and wished him luck. 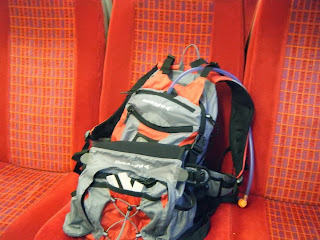 Streatley was only 4 miles on and if we could keep up 15 minute miles only 1 hour.  I lost Mat on the way as we got mixed up with a few others going down a steep hill.  I think he could hear footsteps behind him and assumed it was me. I also suddenly realised, with all this walking the cut offs were starting to close in on us.  At Streatley I checked and we had just 2 hours 30 to make the next 8 miles.  I found Mat in the hall and said I couldn’t stop as I thought I was going to be tight for Benson’s cut off.  Leaving on my own at 5 am I started to move slowly and feel every blister and muscle ache.  Mat did catch me up, but by then I was somewhere down in hell and told him to go on as I didn’t think I could get a good enough pace to meet the cut off.  He went off and I dawdled along feeling sorry for myself.  The path here was very muddy and I was sliding around easily due to fatigue. It’s a part of the Thames path I train on regularly.  So knew how it can get.  Then it started to drizzle and I really lost hope.  At Moulsford you come away from the river and along the road, then drop back down though some school fields and under a railway viaduct, which is usually very muddy and slippery.  At the point you turn down, I met someone coming back.  He said he was going to walk along the road to Wallingford and then Benson and quit as he didn’t think he would make the cut off.  I said I was thinking the same and would walk with him.  As we got back to the road the organiser drove past.  They stopped and said you have missed the turn.  We said no we are quitting, and asked for a lift to Benson.  They didn’t have room, but a car behind stopped and we squeezed in with them.  They were crewing someone who had quit too and were taking him to Benson.

At Benson I handed in my number and got a lift home.

After a sleep I woke up to sleet hammering on my window and thought I am so glad I am not out in that.  Then I found out the race had been abandoned, due to the weather and dangerous conditions.   4 hours before the final cut off.  I would have been somewhere out on that trail cold, wet and miserable and not allowed to finish.

The Thames Path 100 was a great introduction to the world of ultra running.  I met some great people.  The ultra community is small and friendly and I shall try another time to do 100 miles, but not this year.