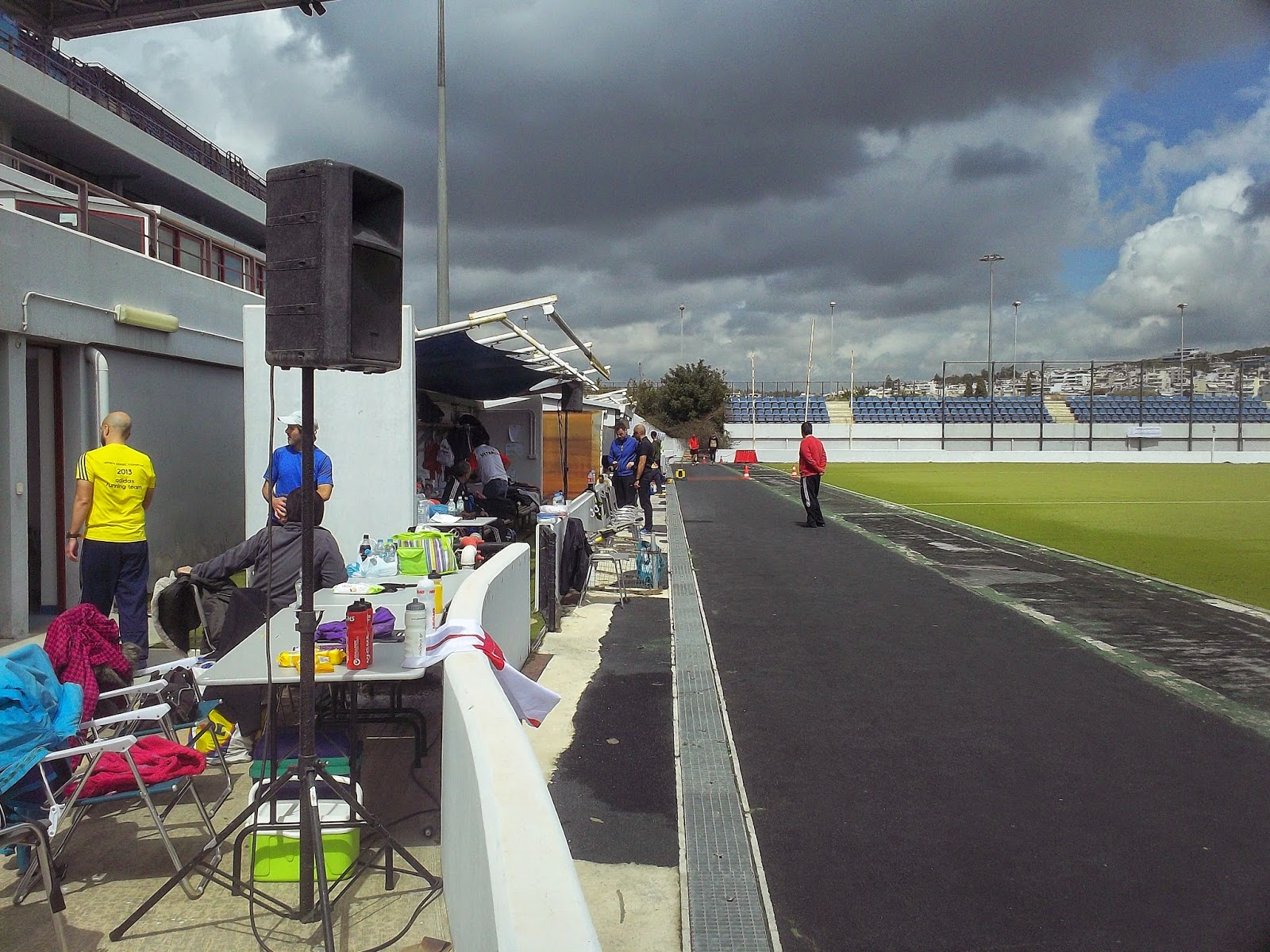 Training
It had been a good winter for training.  I had joined the gym and been going there regularly for swimming through October and November.  November saw a long run once a week, but not much else. Then December came and with holidays and festivities the training took second place with only one week managing a couple of 20km runs. In January the planned training started. It saw a build-up from 50km in week 1 to 113km in week 4. One ‘rest’ week of 32km then February built up to a final week at 157km.  The first week of March was a rest week with only 27km on the clock.  Then I did 2 weeks at 120km. That was my taper.  The week before the race I settled for 12km in 3 short runs just to keep the legs ticking over but rested. 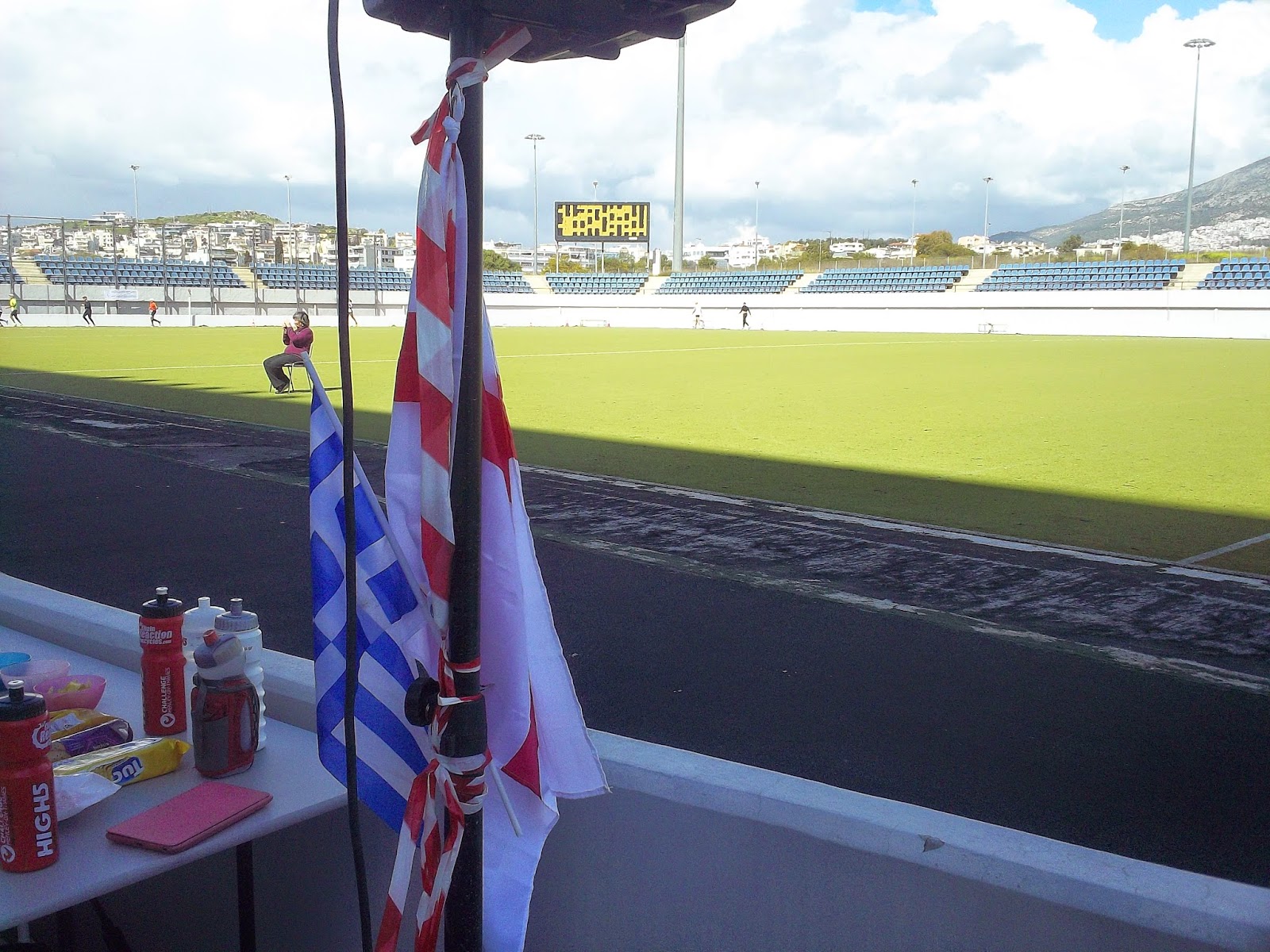 The Spartathlon effect!
On the 12th of March I learnt that I had got a place in the Spartathlon.  Each country is restricted to 25 athletes and with 40 applying from the UK I felt honoured to get a place.  This had an immediate effect on my training.  I felt good, happy and strong.  My usual 21km plod to work became purposeful and consequently more enjoyable and slightly faster.  I was able to put together more back to backs than I had ever managed. At times I had to stop myself from running too much and remember that the rest is when we get stronger. 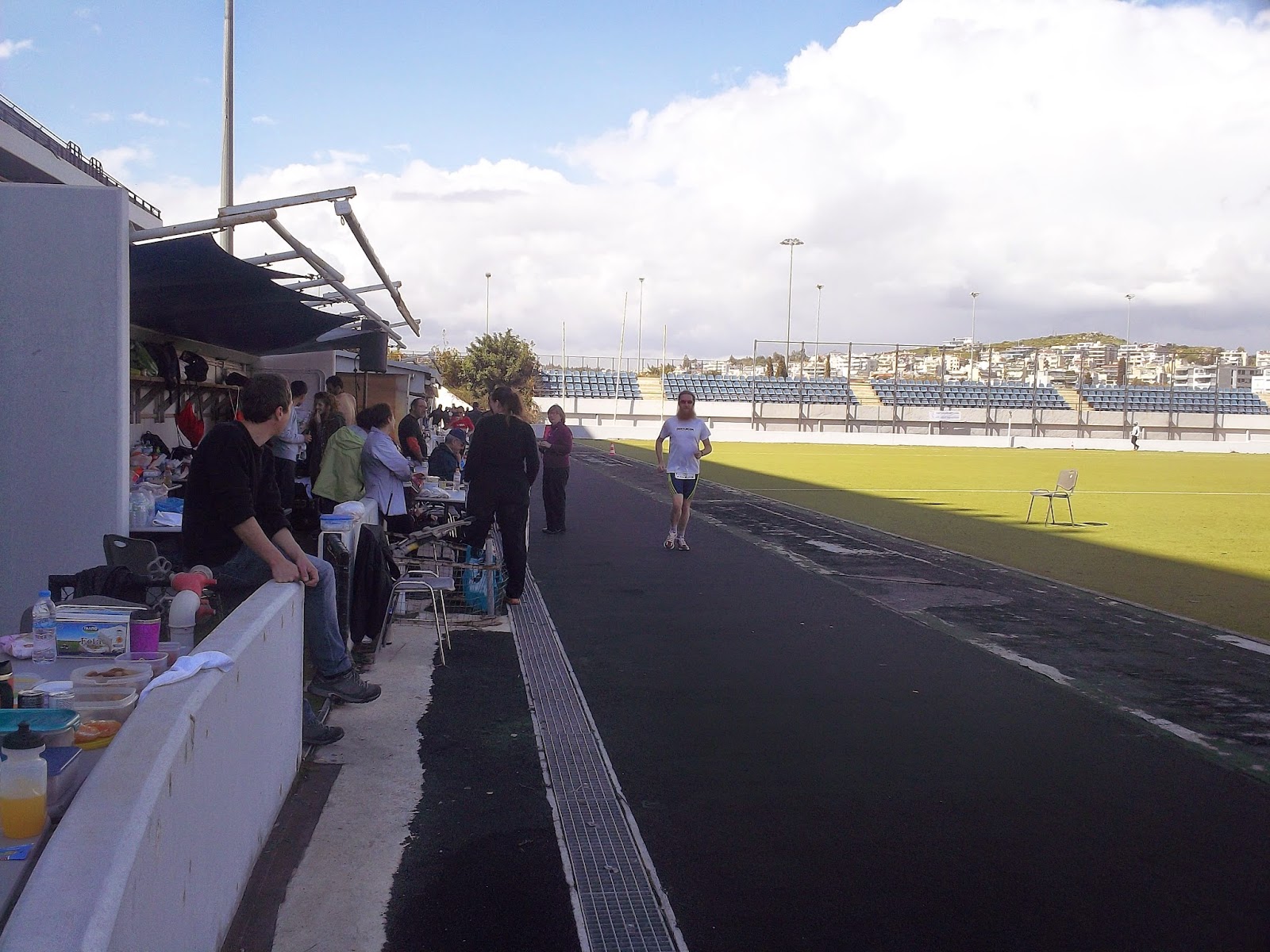 The Plan
So on the back of this training I had some lofty goals.  The main target was 217km.  216km is the automatic qualifying distance for Spartathlon.  I was already thinking ahead to next year.  The backup target was 200km and the realistic one was 180km. 180km was enough to get me in the draw again for next year’s Spartathlon.  The furthest I had run in a 24 hour race previously was 168km.
Next year’s Spartathlon is important to me, because it has been my long term goal to run it in 2016 the year I will be 50 years of age.

The Preparation
The race started at 1pm on Saturday 28th March.  I flew from Heathrow at 10pm at night.  The flight is 4 hours and the time difference 2.  So I arrived in Greece at 4 am.  My wife picked me up and drove me home.  I was in bed at 5am.  10 am I woke up ate and we drove to the venue.  If that sounds rushed it actually worked out well.  Usually I don’t sleep well before a race.  But being this tired I got 5 hours good sleep and had adjusted my body clock to be awake at night. 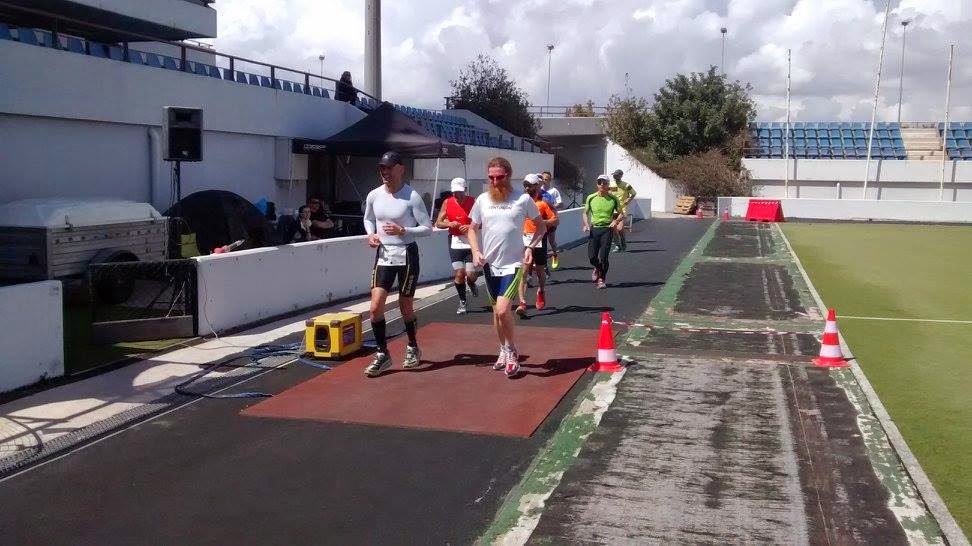 The race
So at 1pm exactly I started running around in circles again. Like a dog chasing his tail. Except the circle’s a little bigger. In this case 1km big. To hit 217km I planned 6 minute kilometres or 10 km per hour.  This allowed for some slowing, but generally I wanted to try and even pace it as this worked better for me last year, than the other method ultra runners use, which is go out fast and hang on.
Lap 1; 6 minutes exactly.  This is good.  Lap 2; 5:28 oops that’s wasn’t so good. Lap 3 back to 6 minutes.  And so it went for the first hour.  I completed 10 laps in 00:59:39 which included 2 toilet breaks to get rid of some nervous energy. 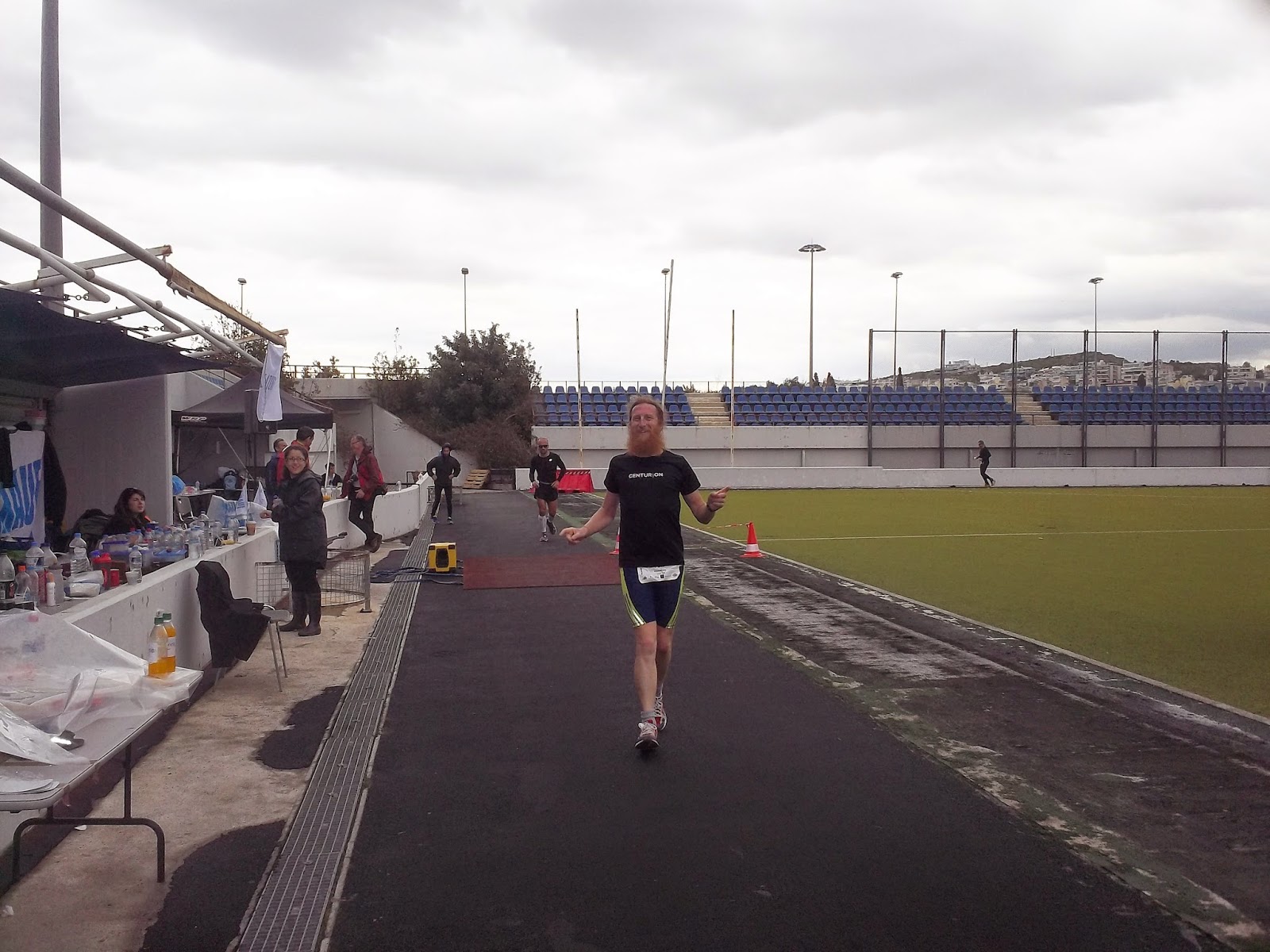 At 20 laps I was 3:30 up on pace.  Which doesn’t seem too bad and didn’t at the time, but those 3 minutes will cost a lot of time later on in a 24 hour race.  At this point I started to put in some 5:30 laps, with my wife telling me to slow down as I had instructed her to do so before we started.  The rule was don’t let me run faster than 6 minutes a lap for the first 20 hours. Consequently at 3 hours I was now 1km up on my target with 31km. This continued for the next 2 hours, so I was at 53km at 5 hours still running sub 5:30 minute 1km laps.  I then slowed a little and completed 9 laps for hour 5 to 6.  All the while feeling really good and thinking I can actually get 240km here. From 9 hours to 10 hours I got back to my 10 laps per hour followed by 2 hours of 9km per hour and started to feel awesome again.  I had one more low point between 15 and 17 hours where at one point I dropped to 5km an hour, but I knew it wouldn’t last and at 17 hours after they had turned us again and I was going in my preferred anticlockwise direction, I settled into a good rhythm and was able to run at 8km per hour for 6.5 hours.  This was due to having an excellent crew, my wife and daughter, who had worked out we could still complete 200km. I tried not to do any calculations to save my energy for running.  The brain uses it up to easily and still gets it wrong 20 hours into a race anyway.
I hit 200km with just over 30 minutes left on  the clock and as the last lap was so hard to run I decided just to walk until the end.  I did 2 more laps and a bit at 15minutes per km. Finishing with 202km and 273 metres. 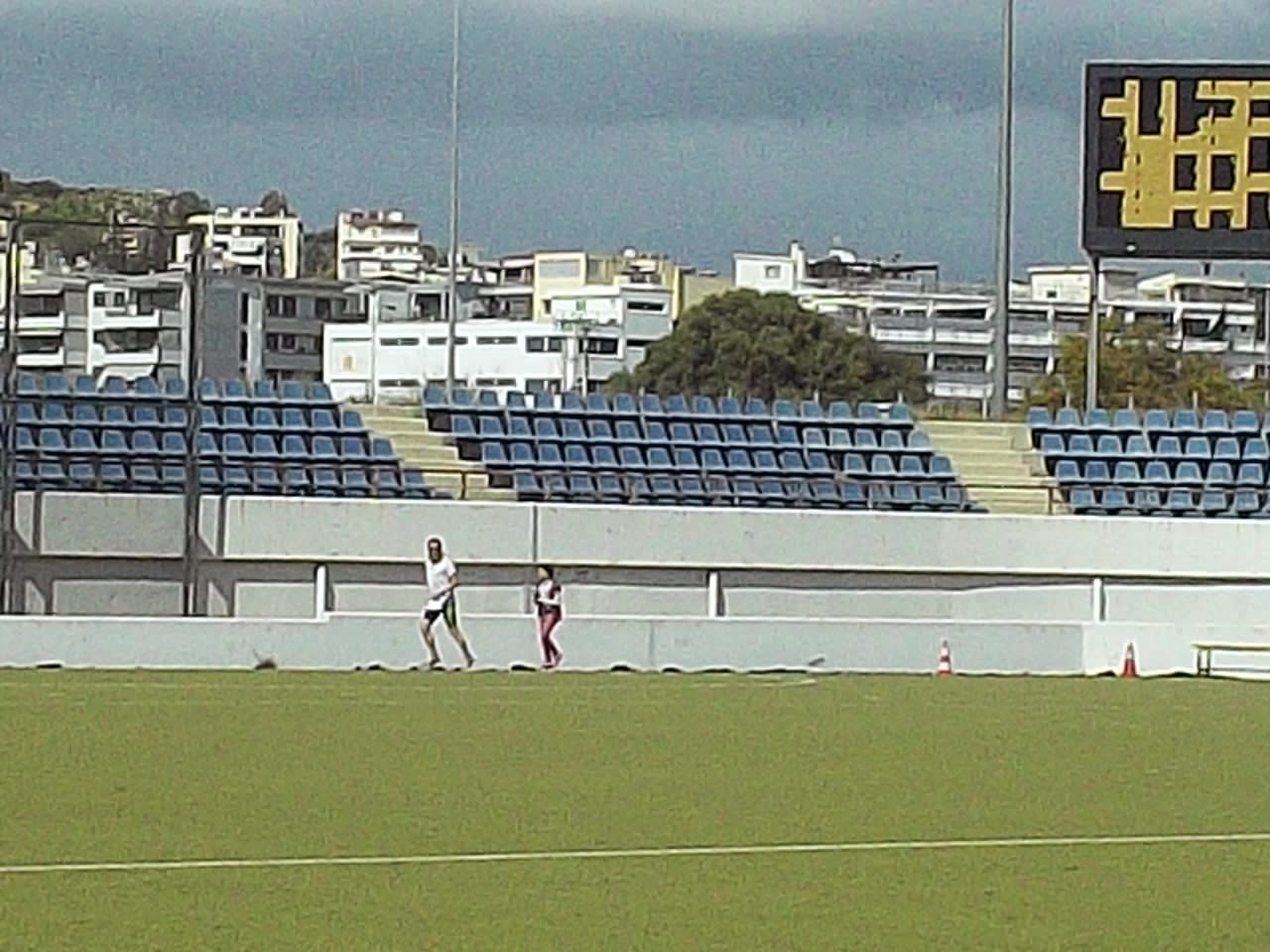 The course
The course was a 1km loop.  It went 300 metres around the hockey pitch from the 2004 Olympic stadium and then out the tunnel and around the carpark for the other 700 metres. The only ‘hill’ was the tunnel from the pitch to the carpark and was perfectly runnable for the whole race although I elected to walk it from the first lap. I only ran it on laps 3 and 4, because I forgot to walk it and 199 and 200, because at that point it hurt more to walk than run and it was also hard to get running again if I stopped.  The whole course was floodlit which I think helped at night.  I never felt tired once and I have fallen asleep in races before. 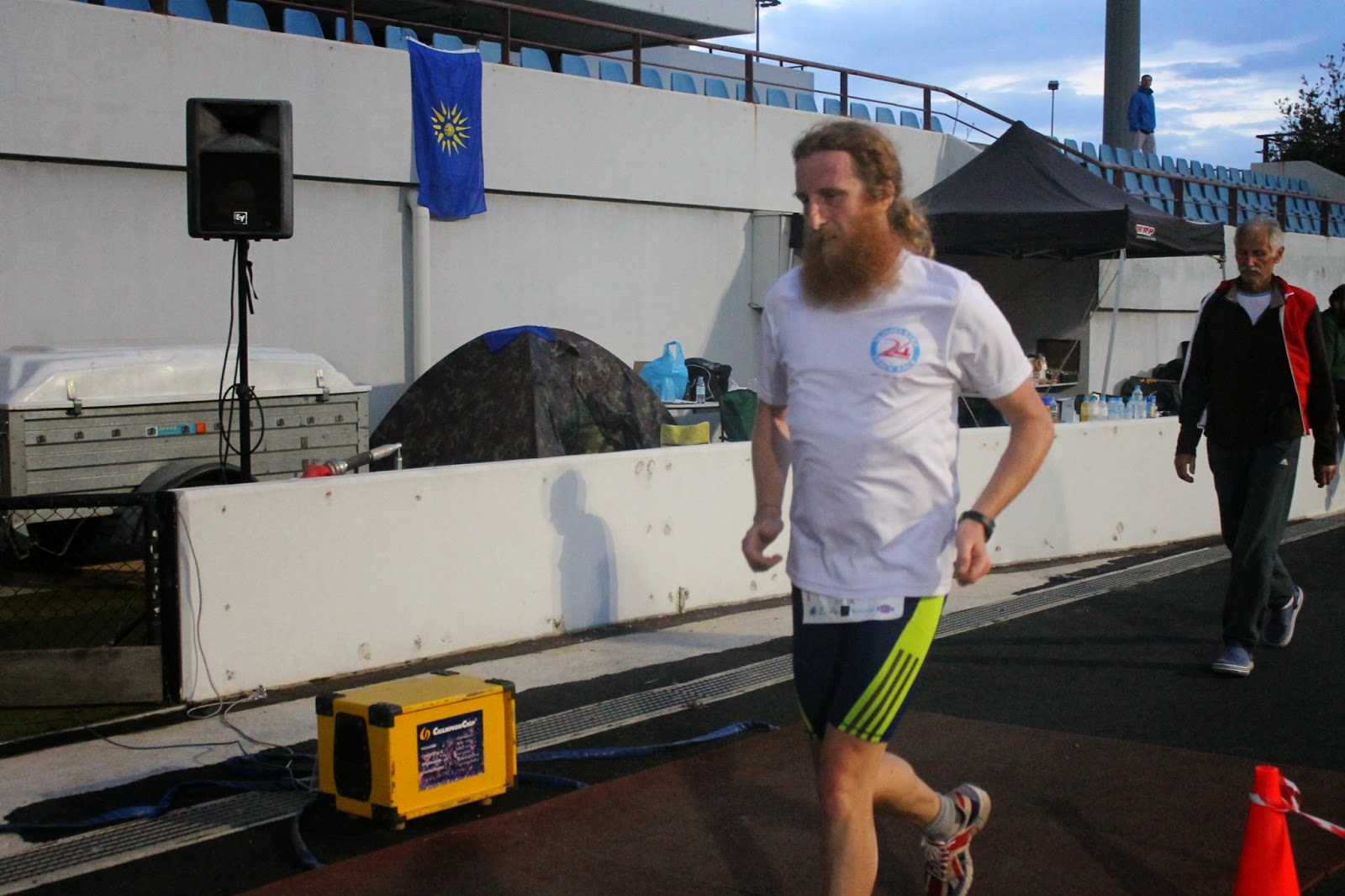 My pacing could have been better. Hours 2 to 5 felt good and I ran too fast, but I think had an effect as early as my first low point at hour 7 and definitely at hour 17 when I put in my worst hour of 5 km.  It was interesting that at hour 2 with 20km I was in equal 10th place, but still finding it hard to run my own race and slow down, because there were athletes running faster.  24 hours is about controlling your mind and knowing you will go up the positions later in the race.  I don’t think 24 hour races even start until 18 to 20 hours in.  At 12 hours you can be in 20th place, but you don’t know what the others are doing.  Some go to bed, some get injured and some blow up.
At 16 hours I had settled for 6th place.  Those above me too many laps to catch up and I just had to keep going to stay ahead of those below me.  Positon at this point became irrelevant as I couldn’t podium, but I still had 200km to get and as it was a team effort I needed to do that to reward my crew for their hard work.  Suddenly, well not suddenly but it seemed it was as I was no longer looking at positions, I was up to 5th.  The person above me had stopped!  Then it happened again, with 5 hours to go I was up to 4th and 3rd had also stopped, but he was on 215km, so probably not catchable. As it turned out he came back and walked another 5km in 2 hours, putting 3rd out of reach. 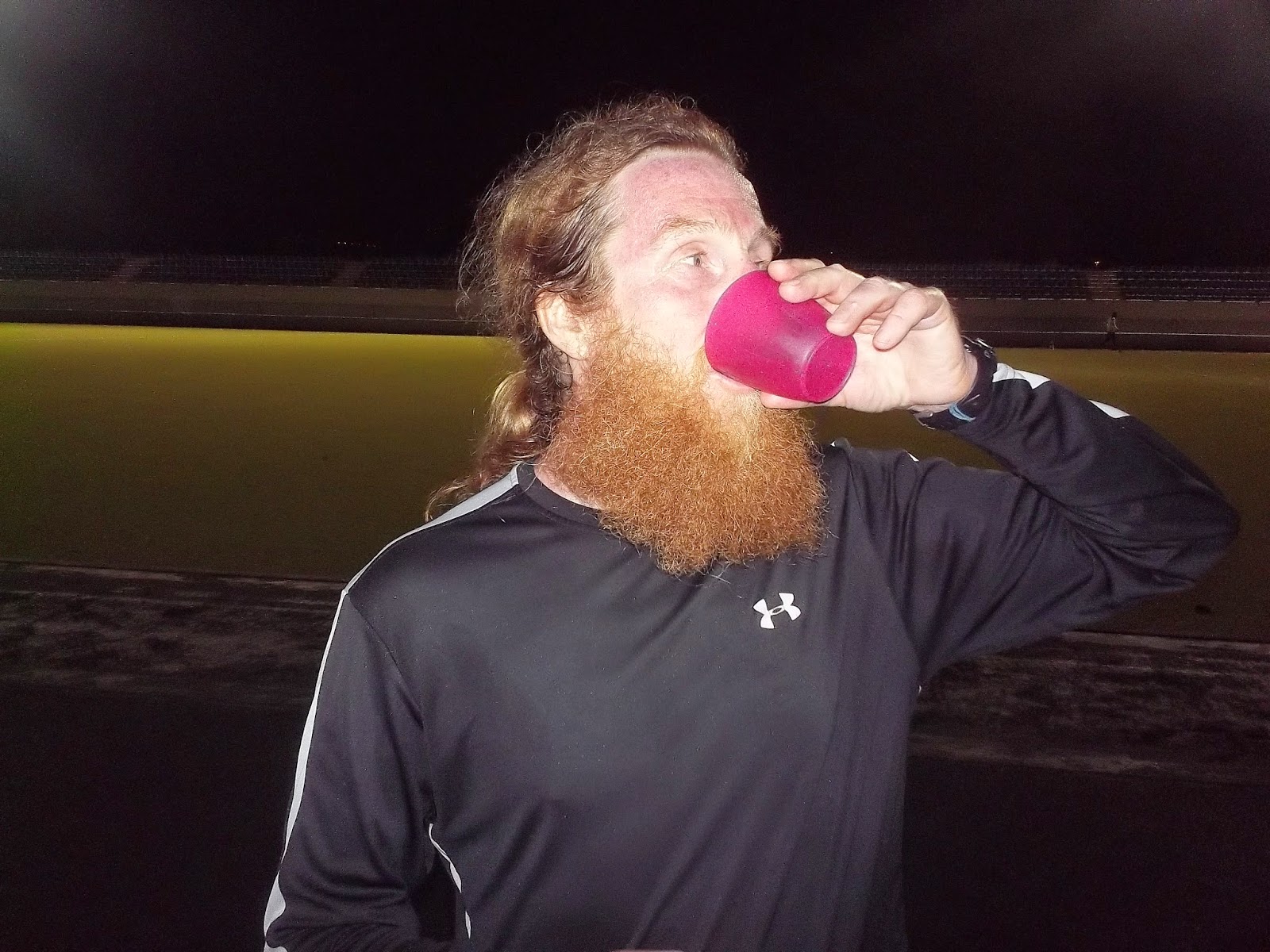 Food
I ate little and often.  My choice of food was small handfuls of mixed jellybeans and salted peanuts. I also had cold boiled potatoes and lentils. My wife reminded me to eat salty snacks when sometimes I just forgot and wanted to carry on running.  I also had chocolate chip cookies, tuc, crisps and jelly babies. I was offered oranges from the crew next to us, but declined as my stomach was behaving well so I wanted to stick with what I was doing.  I did get a banana from the race feed station once as we didn’t have any.  I drank green tea through the night and had one black coffee. I’m not a believer in supplements for races, but I did have some high 5 zeros from freebie bags from other races, so we mixed 2 of them and I sipped small amounts every few laps. I’m still not convinced.  If I need salt I eat crisps, peanuts and salty biscuits. With 4 hours to go I started on a cola and water 50/50 mix.