Ultra Hippy Does the Thames Path

The forecast was for Sleet and snow all day Saturday, with a temperature that has usually left us by the time the daffodils start to poke their heads out from the dirt.  The wind was supposed to chill the freezing temperatures further.  I had a bag full off spare clothes so I could change at every aid station if I got wet, so I wouldn't freeze.  I was wearing a base layer and carry one too.  I was also wearing my cheaper rain coat that wasn't upto the minimum requirements for the mandatory kit, whilst carrying my good oh so expensive one that was.  The plan was to run for 4 hours then start a run walk pattern. 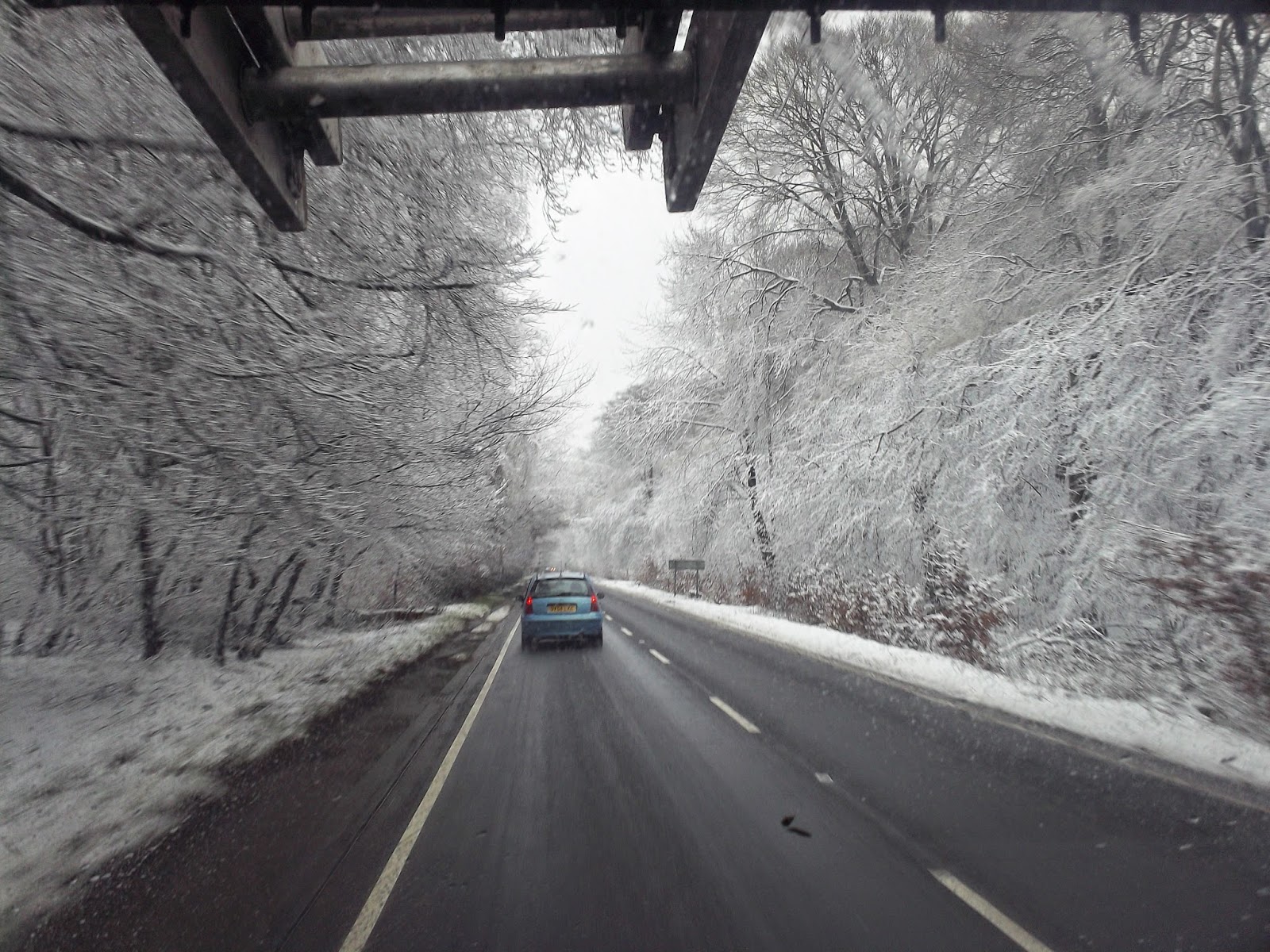 I felt so good and ready for the race and along with the adrenalin, went out way to fast for my ability.  I covered the first 11 miles in just over one and a half hours.  I had planned that to take two to two and a quarter hours.  My initial choice of shoes was road shoes.  The part of the Thames path through London is on road, footpath and some man made surface.  Also the first part of the race had us redirected along some roads on the other side of the river to avoid another race that was going on. This worked well and probably helped me run along a bit quicker than I should of been doing too.

Somewhere between Walton and Wrasbury Paul Ali went past me.  I said hi and we had a little chat.  He mentioned that we were running at around an 18 hour 100 pace.  Definately to fast for me. Between Wraysbury and Windsor were a few muddy sections and I decided that I would definatly change to trail shoes when I first met my crew, which was going to be at mile 28 in Cookham. My feet and socks got wet, but not uncomfortable.  I think it actually helped me not get blisters. Usually my feet get too hot and blister really easily, especially on the tarmac sections of a run.

At another point Marvelous Mimi came past me.  I had no business being infront of Mimi, but was glad to say hi, and catch up on her plans for the year. I was also glad I could mention her in my blog. Name dropping can be fun. 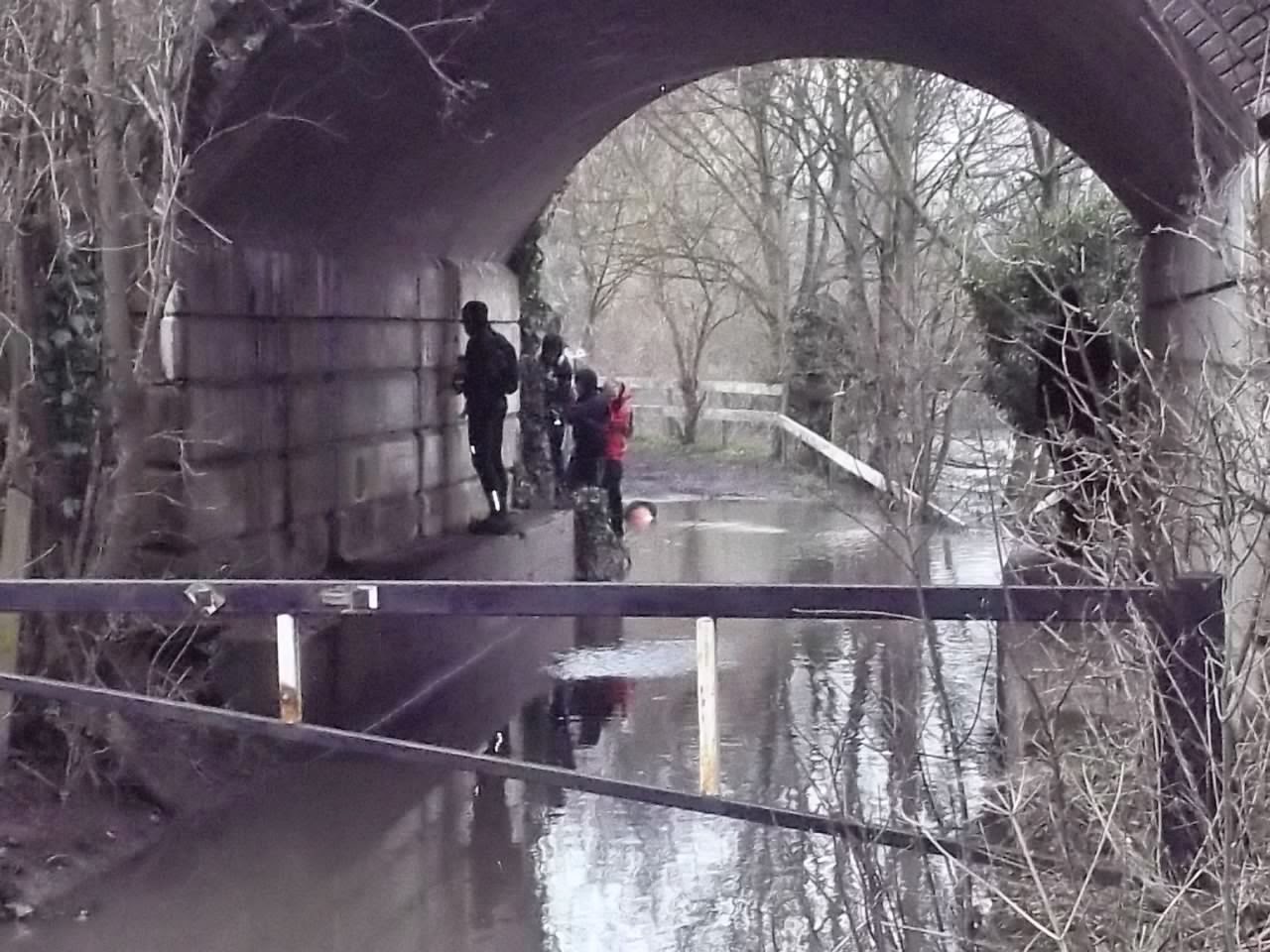 Windsor came and went with a massive flood to negotiate by walking along a concrete parapit and then using a fence to climb past it.  I had to call my crew and make sure they would be at Cookham as I was an hour up on my schedule.  They had already seen this online and were on their way.  I arrived at Cookham, checked in and took a short walk to the van, where I changed socks and shoes; had my dinner of rice and lentils; plastered some Sudocrem on my under carriage that had been rubbing a bit; and set of back to Windsor.  I was still running without walking breaks, albeit starting to slow from my earlier, stupid pace.  On the way back to Windsor I made a decision to change all my top half of clothes ready for the colder night, as it would be around 7 when I got there.  I tried to make it before I needed to put on my head torch, but that failed and I had to stop and put it on under a light next to a lock. 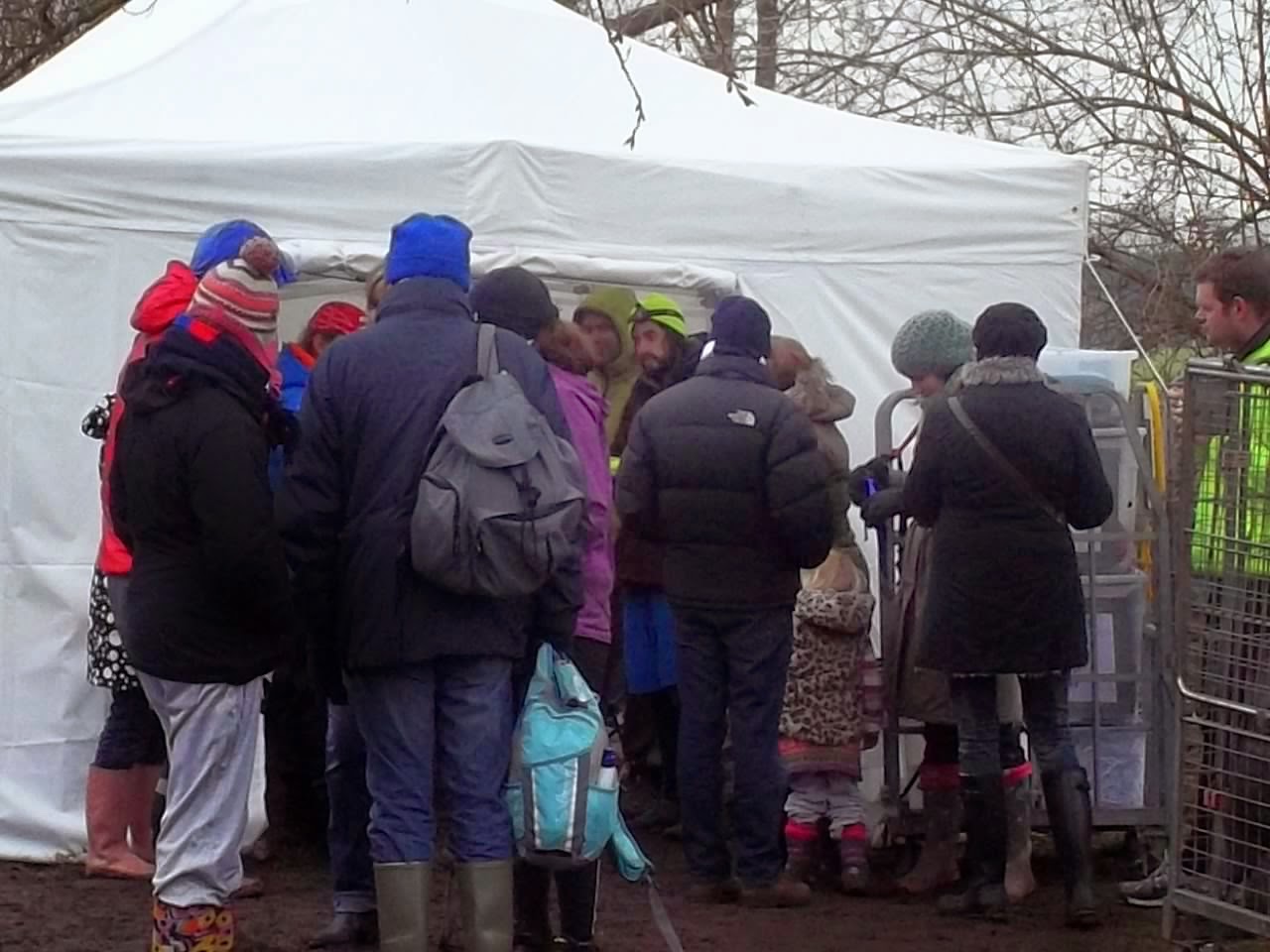 At windsor (mile 48, I was practically half way now) I changed all my top layers as planned and added another layer.  The trail shoes were great. I was still sliding around in the mud, but to a lesser degree.  It was here that I realised if I could maintain a 4 mile an hour walk for 50 miles I would make the 24 hour one day milestone.  So I decided to walk.  My main goal was to finish and with so much time in the bag now I saw little point in risking slipping and injuring myself on the mud or even worse slipping into the cold river.  So I started a brisk walk pace.

I covered the next 17 miles to Walton on Thames in five an a half hours, so didn't manage 4 miles an hour, but was still well inside the 30 hour cut off. This was the last time at Walton and I turned to head back to Wraysbury. I briefly met my crew on a road alongside the river just outside Walton and had a cup of wake me up coffee. I was now alone until Windsor.  We didn't know the area too well and the crews weren't allowed at Wraysbury so I told them to go to Windsor and get some sleep while they waited for me to return.  At one point I did have the company of a couple of grumpy swans that I woke with my headtorch. Sorry ma'am. 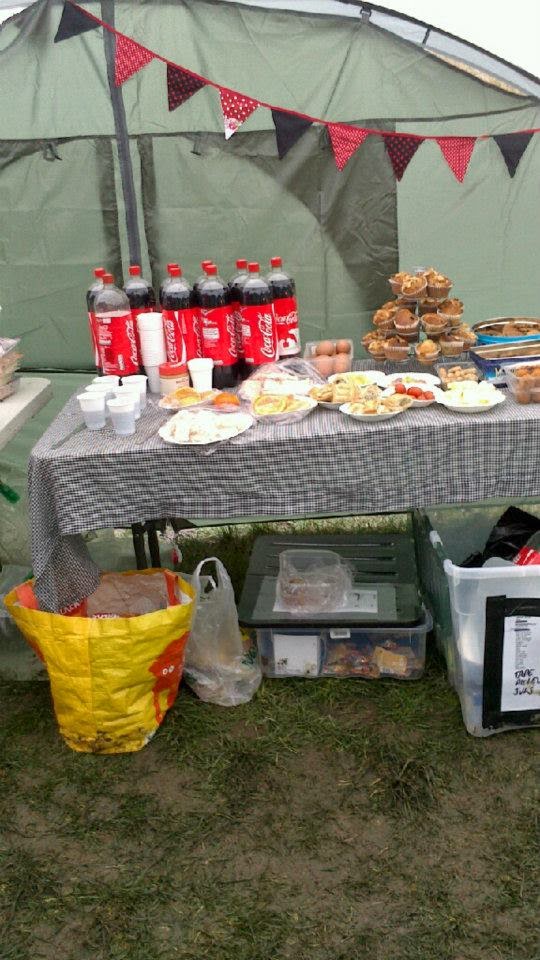 I continued to walk as fast as I could in the mud and now with sleep deprivation to fight as well. I looked forward to a cup of tea at Wraysbury. This helped for about half an hour then it was back to looking at nice places I could sleep. I managed to avoid the temptation knowing I would freeze to death in the weather we had if I stopped. For this section I was alone all the way. After leaving  Wraysbury I recieved a phone call from the crew to say that there was a new flood just before Windsor and to be careful as two people had slipped in it and got soaked and cold. It started to get light just after 5am and I was caught up by a guy and his pacer.  I hung in with them until Windsor.  They had also been warned of the flood and sure enough we found it.  It wasn't the river but a tributary on a short path near Datchet.

Arriving back at Windsor at about 6am.  My crew were waiting and I had breakfast, which was a lovely vegetable soup.  I put on more layers as I knew from last year as the sun rises I get cold.  My body would be tired and unable to keep warm plus I was moving slower now and generating less heat. I did start to feel cold so had to leave as soon as possible.  I jogged a little to warm up again and then continued to walk as fast as I could.  My jogging was now the same speed as my walking so there seemed little point in trying to run.  I had 20 miles to cover and if I could of done them in 4 hours was in for a 100 miles in one day buckle.  Normally 5 miles an hour would be an easy pace, but not after 80 miles, so the mad idea didn't last long and I settled in for a long walk to the turn point and back to the finish.  Besides if I finished it to quick it would be all the more harder to make a PB in the future. 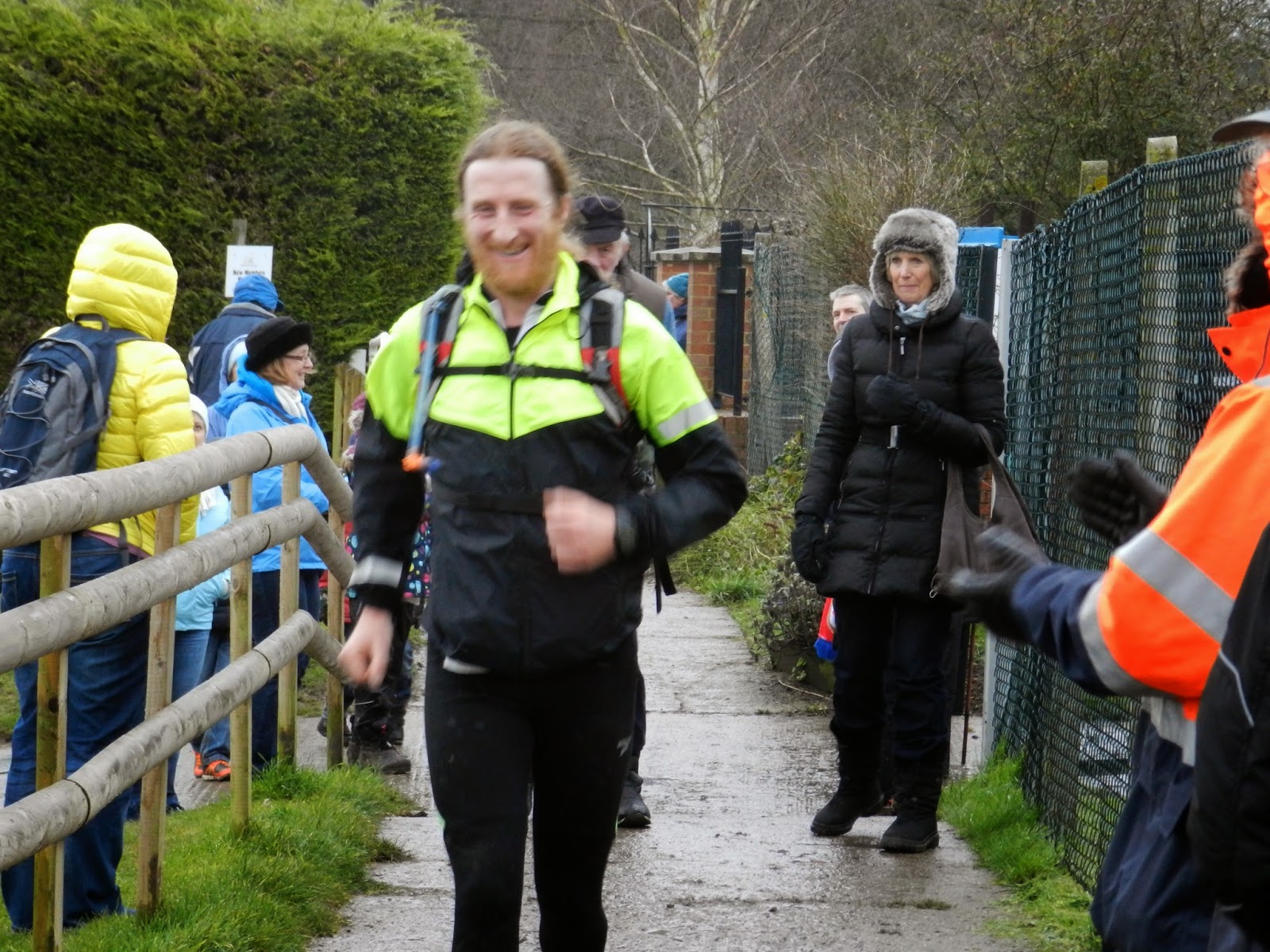 On the way to Cookham with my body wanting to sleep. I saw some birds rowing a boat downstream. I double checked myself and looked again.  Sure enough there they were rowing the boat. It didn't seem too odd for a while then I thought that can't be right and looked again.  I had to concentrate really hard to make the boat disappear and see a line of birds floating downstream with no oars on their wings, but I did it.  Then I wanted them back so I looked away and looked back, but their boat was gone. 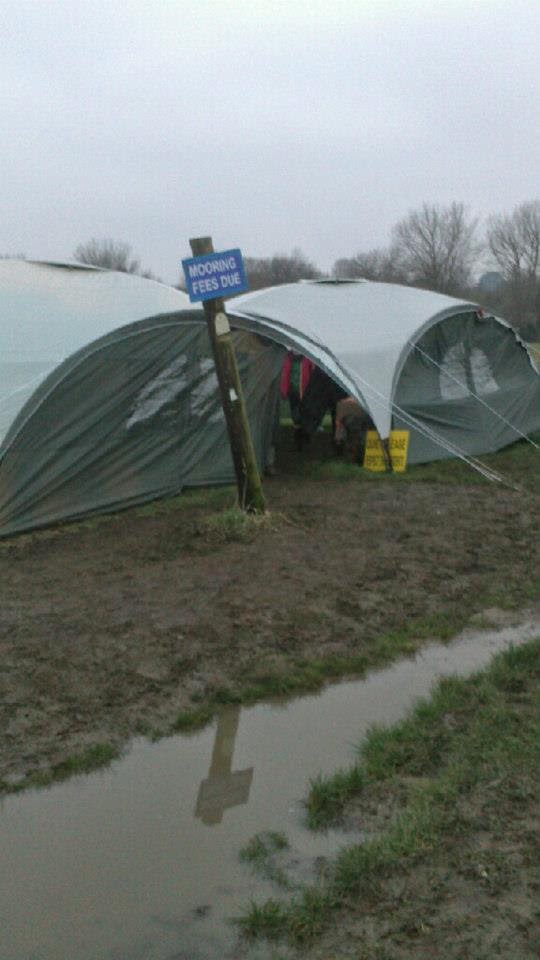 I arrived at Cookham, checked in and turned around instantly.  I met my crew took an Ibruprofen to ease the pain in my calfs and get me to the end and off I went.  I was 10 miles from completing 100 miles!  I tried to run. It was still the same speed as walking so I soon gave up that idea. I got to Maidenhead and my wife met me and walked a little with me. At the bridge I had calculated I had 6 miles to go.  It was a long lonely 6 miles I hardly saw anyone. It was getting or I was getting colder, but eventually I made it back to Windsor, crossed the flood via the fence and concrete parapit and signed in to get given a time of 27 hours and 36 minutes, along with a medal, buckle and tshirt.  My first 100 mile buckle! 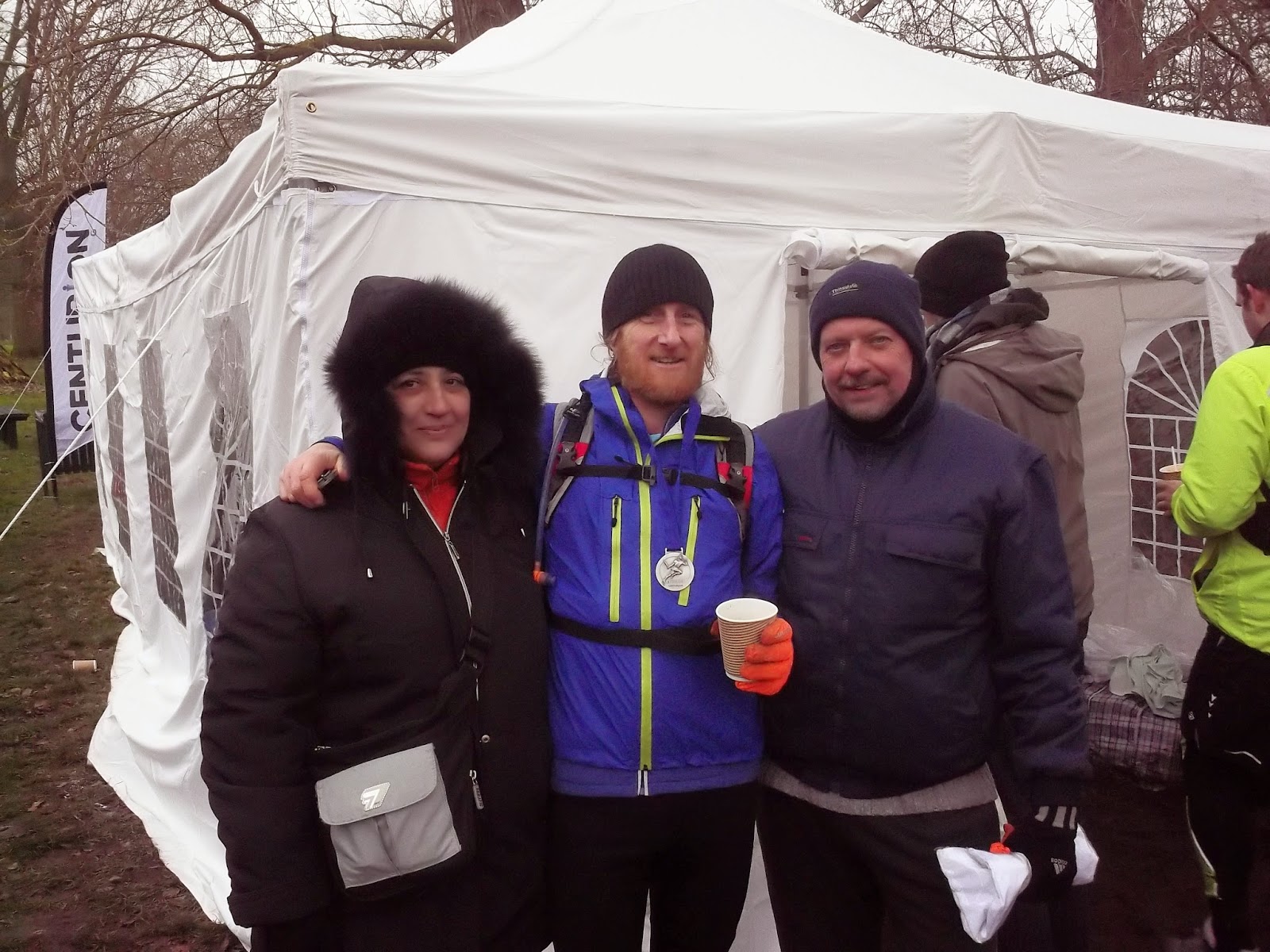 A special thanks to my Crew: Colin and Maria (who is also my lucky wife, who has to stand in the cold for 27 hours because she married an Ultra junkie)