This was a local race for me. The start is 6.5 miles from my house. I was tempted to cycle to the start but instead, got up early and got a lift to Didcot where I got the train to Goring.  I met Martin Pether on the train and once in Goring we headed for the Morrell room hall. 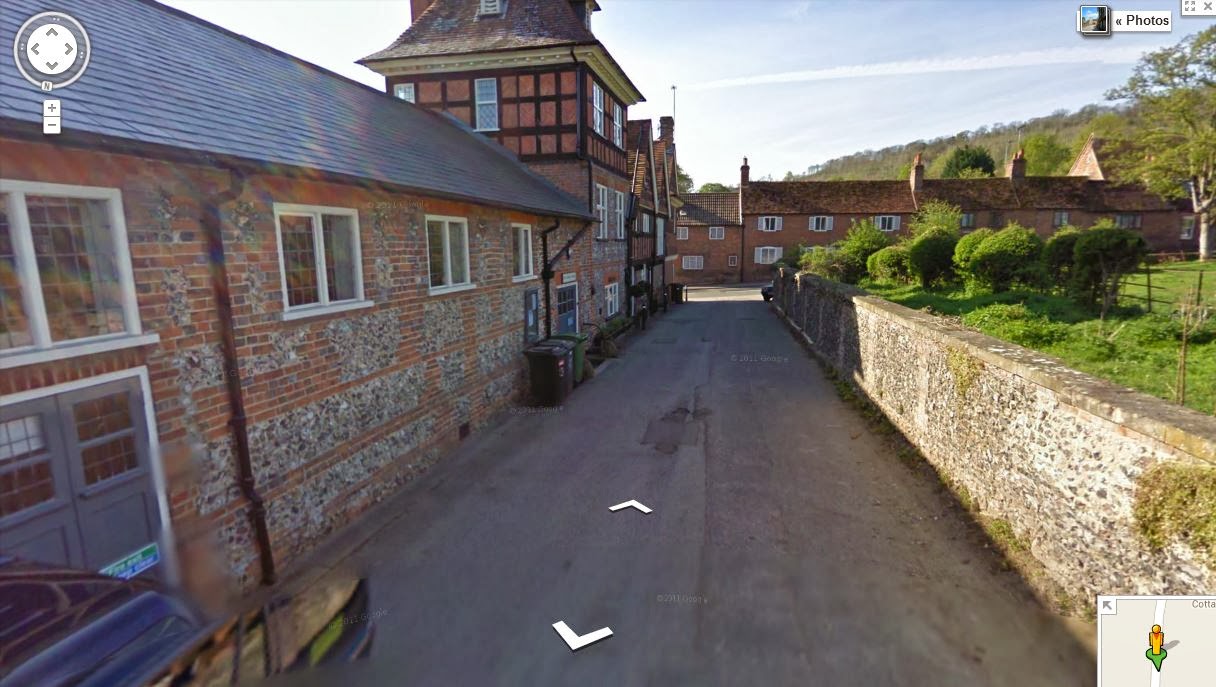 Here we signed in, had a kit check and we dropped our bags.  The race is an out and back run on 4 different spurs.  So we would be back here every 25 miles.  We then went to the café close by, just over the bridge and I had tea and scrambled eggs on toast. Coming back I met Stuart March on the bridge and he took a photo of me. 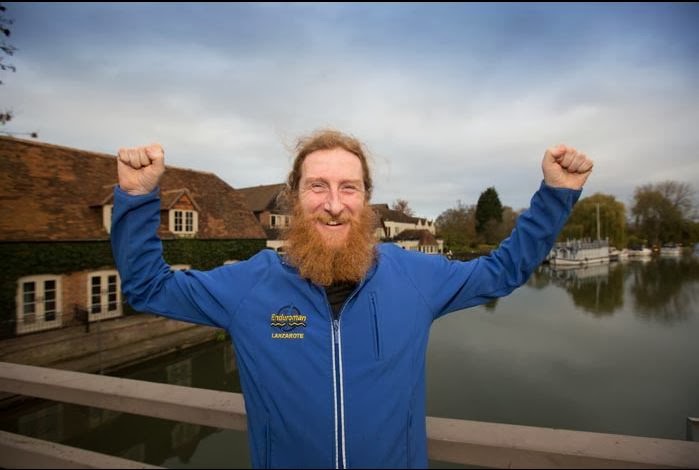 I was milling around at the back chatting, when I heard the countdown to the start.  Then the horn went and I wasn’t ready I was fiddling around with my eTrex20.  I finished putting it  into my pack walked along doing up the clips on the front. So I was near the back and knew the path went into a single file lane.  This was perfect as it would stop me running of like a lunatic, something which I am accustomed to do under the adrenalin rush of a race start.

The first spur was to Days Lock and back. It follows the Thames Path and is part of my regular long runs route. So I know it inside out, back to front. Dropping off the main road that takes the Thames path around some posh houses in Shillingford that don’t want to share the Thames with us plebs, I passed the leader in the second field, coming back.  I checked my watch and it was 1:33 into the race. I got to Days Lock in 1:47. Although it was a shorter spur at 19km (12.5 miles should be 20km) I was still way to fast.  I had decided on the strategy I used on the SDW100 earlier in the year, as it had worked well there.  This was to take a 24 hour pace plan, which I had written down and laminated and attached to a race belt and just chip away a few minutes on it at each aid station. This meant I could always fall back to 24 hours as a race plan, but could try for the 20 hours, which, on a good day is possible for me.  On the way back I checked my watch again at the place the leader had past me. He was almost 30 minutes up on me already. Amazing speed to be running a 100 mile race!

On the way back to Streatley I started to get a really sore undercarriage.  I was wearing a pair of lycra running shorts that I have used often and a pair of tights over the top that I had also used quite a few times, but I had never worn them together one over the other.  I had done this as I didn’t want to have to stop and put the tights on when I got back to Streatley.  However, what this now meant was that I needed a complete change into another pair of tights and no shorts underneath. While at it I also changed my tshirt.  With copious amounts of Sudocrem this solved the problem for the next 75 miles. Having a ‘base’ you keep returning to was great as I had a rucksack full of spare clothes.

Chris Mills was helping out at the race and offered to pace me from 75 miles.  I said I’ll think about it and let him know.  My hesitation was because I have only ever tried with a pacer once before and I blew up with and injury before getting to him. Possibly caused be trying to go to fast. So having a pacer waiting was going to feel like a bad omen for me. 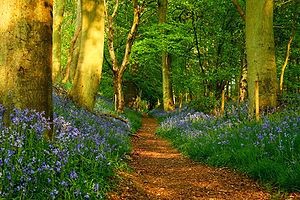 The next stage on the Ridgeway to Swyncombe, was the hardest and I had a little low at the start of it.  The usual things going through my mind like, ‘100’s are hard. I should make this my last one’. It didn’t last long and I never once thought of quitting. After North Stoke a lot of this section was uphill. It runs through Grims Ditch, which in the summer is covered in purple flowers and an absolute delight to run through.  Remembering the reccies along this section and how much fun they had been certainly helped get through it with 30 miles already in the legs. I crossed a road where someone’s supporter was waiting. He said I was being beaten by a piece of stringer.  I could see someone in the distance and tried to catch them.  It took a long time to get there, but when I did I saw it was Sam (sideburns) Robson. He looked like he was going well he had ran over 100 miles already! We had a chat and then I went on my way. I arrived at Syncombe 1.5 hours up on my race plan.  This was looking good for a sub 20! I put my head torch on here as it was starting to get dark.

The way back to Streatley was all down hill and was really enjoyable. I arrived back at Streatley in 9 and ½ hours from the start and decided to take Chris up on his offer.  A pacer through the last part would really help.  I had some pasta and a cup of tea. My well earned 15 minute break I like to take at the 50 mile mark. Again this is something that worked at the SDW100 and it worked again here. I often hear that time in an aid station is time wasted not moving forward, but I find the short rest actually helps me run a little faster than if I continued through and running a little faster has a positive effect on me. I left the Aid station and told Chris to expect me back at 1 am. Nici Griffin who was helping out too said she would hold me to that. So with just over 5 hours to do 25 miles I set off.

This spur is on the Ridgeway out to Chain Hill and back. I have run along the first part of this maybe 20 times.  It is another part of my long run training loop. The first part is tarmac and although slightly uphill, easy to run and I passed a couple of people that had overtaken me at the aid station. I had seen them come in and turn around to go straight back out while I drank tea and ate pasta.  This help solidify in my mind a break is good for me. The ridgeway up here is wide and you need to take care with the ruts caused by motorized vehicles with oversized tyres. There are also many paths crossing and spurring off the main path. Once I got to Bury Downs, the intermediate aid station I was on part of the course I had not reccied and so didn’t know. I thought it was just a 4 mile straight path.  I took care to stop at the finger posts and check for the Ridgeway signs. Also torches coming back helped a lot. There was a left turn and amazingly I didn’t miss it. It was hard for the course markers to mark it as it was a wide path and just long grass and deep ruts so nowhere to put tape or spray arrows on the ground.

I arrived at Chain Hill at 10:32 (12:32 hours from the 10 am start) 2 hours 45 minutes.  I would get back at 1:15 if I kept this pace up and why shouldn’t I? I had just ran uphill and now it was downhill to get back. When I got back to Bury Downs car park I had a nice surprise.  Two of my triathlete friends from the Oxford Wakeboard & Ski Club where we swim had turned up to cheer me on.
I was heading back nicely drifting in my thoughts when I hit some tarmac.  I knew I hadn’t passed certain landmarks I was looking for and that I shouldn’t be on tarmac yet. However in my sleep deprived state I just carried on down the tarmac road. I got to a village I didn’t recognise and it was then I decided to get my eTrex20 out and check.  I was not on the Ridgeway anymore. As I already knew, but hadn’t done anything about it.  I turned around and headed back. I saw a footpath that looked like it cut back in the right direction, so took that.  It ended up circling around and going back onto the ridgeway where I had inadvertently left it. I think I had gone the wrong way for 20 minutes meaning I had lost 40 minutes time as I would have been 20 minutes further up the path in that time.

I arrived back in Streatley at 7 minutes to 2am.  Chris was ready to go but I needed 5 minutes.  I got some beans and a cup of tea. 25 miles to go. I was a bit annoyed with myself for not paying attention and losing 40 minutes, but I was still on for a sub 24.

The last leg was along the Thames path again. This time to Reading and back. The first 4 miles is nice to run. It’s up hill through some trees on a nice path.  Then after Whitchurch the path is pretty boring, running through fields until Purley.  I was glad to have Chris with me for this as our chatter kept me going. At Purley you run through a housing estate then cross the railway and down a massive amount of steps to get back to the river. Here it is a short run along the river banks through Caversham until you get to the turn around point. We did this in around 3 hours.  Then it was 3 hours back to Streatley.  Just after Whitchurch I saw Martin Pether. We stopped and had a chat for a minute. He was suffering with a chest infection for the whole race, but was going to complete it.

The last few minutes into Streatley I realised I was on for sub 22 and ran as hard as I could after 100 miles, but didn’t quite make it coming in 21 seconds over 22 hours.  Another sub 24 100 miler. So I was very pleased.

I really enjoyed this race.  We were lucky with the weather and the lack of mud contributed to my enjoyment.