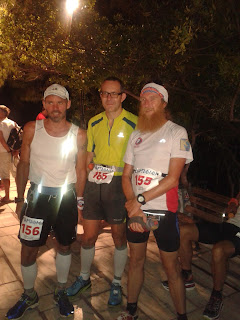 I feel empty; bored; purposeless. My legs are fucked, and I only got 106km. The race is 246km.  I hadn't even got to the hard climbs.  Don't let the course fool you it is up and down from the start. There are long gentle rises. The cut offs are such that you have to run. Walking won't cut it for the first 100km and then the cut offs look more generous, but that’s because you are going up.  You still have to run the downhills and that’s where I failed. My legs weren't strong enough. My quads blew up from the pounding down hills. 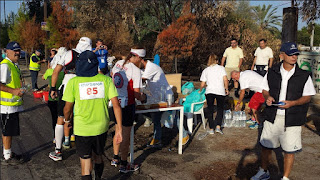 Before I even got to the marathon point they were killing me.  I was looking forward to a massage at 80km. The first point this was possible.  I was telling myself this would solve my quads and I would lose some of the pain.  The cut off for 80km is 9:30 I got there at 9:20.  I gave the poor girl 8 minutes to get my quads sorted. It wasn’t enough time. She did her best but I still couldn't run without a lot of pain. I marched as fast as I could and ran in short spurts. I got to a checkpoint a minute over.  I was asked if I wanted to continue.  I had 15 minutes to do 2km.  Only 2km I gave it a go.  With the encouragement of the British supporters I made it with a few minutes spare. I filled my bottle, grabbed some potatoes and marched on.

I got to 100km where there was a timing mat.  I was told if you want to continue you can't stop. I ran across the mat and carried on. 2 minutes over the cut off. My feet were hurting now too from the constant pounding on tarmac.  The bottoms were getting hot. The socks were wet from the continuous pouring of water over my head and body to cool me from the 36 degrees of heat that bounced of the tarmac and rock faces carved into the hills that make the roads. I needed to stop and change my socks and plaster the hot spots before they became blisters, but I didn’t have time I was flirting with cut offs.  Each checkpoint I came to I had to run through without stopping, no time for food and water now. My handheld water bottle had some water in it and it was dark now so I was ok with the water, but I needed sugar, I needed quads that didn't burn with every step, I need feet that weren't on fire.  I ran in short spurts. I walked with a fast march. The death bus kept passing me. The last checkpoint was closed and they were moving to the next. It was dark the road was winding up and I couldn't see the lights of the checkpoint.  I knew I was late again.  This time it was too late. It was closed.  I had to sign my declaration that I wasn't able to continue. It was the end. 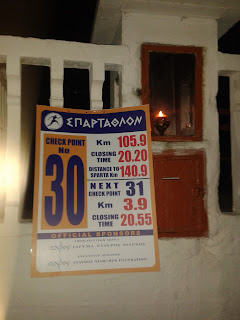 I felt relief. I hadn't failed I had kept going until I was told I was timed out. I didn't stop myself. It was out of my control.  The race was tougher than I ever imagined a race could be.  Relentless heat and quad busting downhills. I was proud to have qualified, to participate in a race where only the best can start and where only 46.6 percent of those succeeded.

Now 4 days later. I feel empty, sad, annoyed at myself for not being ready (I thought I was before the race). I can't run my quads still ache, even after a massage, which helped the recovery.  Even if I could run I don't want to run. I am feeling sorry for myself.  I can run 200km in 24 hours. I did it this year. I can run 100 miles in under 21 hours.  I used this to qualify. Yet I couldn't even run 100km in 12 and 1/2 hours in the biggest race of my life. The one I really wanted.

It feels like the Spartathlon sucked my life energy and I now need to start a slow recovery process. I need to get running again, when I am recovered and I need to know I can enjoy it. At this moment in time I am not sure why I run. I don't know if it's fun anymore, but it was my life for the last 6 years.  So now I have an emptiness inside me. A space for something, but a heart for nothing.